Whoever coined “time heals all wounds” did not anticipate Karyn Kusama. Over a 20-year career, the Japanese-American director from St. Louis has explored how the ruthless passing of time can, in fact, fuel one’s fury.

“There’s something about time that feels like the ultimate destroyer,” Kusama told Observer recently. “Time survives all of us, and somehow, we’ll all be outlived by it.”

The wrath of time, and of women, are themes Kusama is compelled by in her latest film, Destroyer. Written by collaborators Phil Hay and partner Matt Manfredi, the film stars an unrecognizable and engrossing Nicole Kidman as Erin, an undercover cop facing old demons when Silas (Toby Kebbell), a gang leader from a botched operation, resurfaces in L.A.’s underworld.

Kusama, 50, first tackled the task of painting a woman’s fury on-screen nineteen years ago, in the boxing drama Girlfight. But where Girlfight saw Michelle Rodriguez’s Diana channel her anger to thrive in the ring, Destroyer frames anger as complete self-destruction.

“I’m interested in what it means to be so mad about the world there’s potential for it to cripple you,” she said. “I hope, in making this film, I’ve gotten closer to understanding how to be constructive with that fury.”

Destroyer is a soft left turn for Kusama. It’s as bleak as her previous film, 2015’s The Invitation, and its soundtrack by Theodore Shapiro has all the droning of a horror score. But Destroyer is noir through and through, complete with a damaged protagonist navigating a morally ravaged city textured by age. “I find myself attracted to sci-fi, horror or thriller, because there’s so much possibility investigating moral questions,” Kusama said. “They exist on their own terms within a story we find familiar.”

Of all of Kusama’s movie protagonists, the director believes Erin is “closest” to Girlfight’s Diana. Like Diana, “There is a fury she can account for, but the audience can’t,” explained Kusama, “and they have to catch up.”

It’s Kidman’s fury audiences see onscreen. A decorated actor whose superhero debut, Aquaman, came in the same release window as Destroyer, Kidman inhabits Erin like a ghost. Her transformation is as dramatic as Charlize Theron’s in Monster, with heavy assist from the makeup department—a realm Kusama believes is unfairly gendered. “Makeup, costumes—things we often relegate as female concerns—I consider it as big a deal as cinematography or editing.”

But Kusama was careful Kidman’s make-up didn’t dictate directing. She didn’t want Destroyer to be an actor’s Oscar bait spectacle. Thankfully, her actor was Nicole goddamn Kidman, who embodied what Kusama sought for Erin: A “balance between intellectual aliveness and a physical march toward total collapse.”

“Nicole is such an inside-out actor,” Kusama said, noting she went so far as to develop a “very specific walk.” “She seems to limp. She has a very heavy gait. She protects her heart and her shoulders stoop. She dropped her voice a couple octaves. There’s a mental sharpness to her, even as she’s walking through a haze.”

Added Kusama: “She made choices that helped myself, and I hope the audience, see she’s not putting on a mask. She’s channeling a character.”

When the bullets fly in Destroyer, Erin’s rage nearly kills her. Halfway through the film, Erin stalks Silas’ crew only to follow them to a robbery. Seeing red, and a chance to get her criminal, Erin almost charges in with no protection, forgetting the mini-armory she has stashed in her trunk.

Kusama sourced the scene’s frantic energy based on Erin’s emotions: unpredictable, reckless and flowing with adrenaline. She didn’t want the tactical precision of John Wick.

“We’re so trained to watch people be experts and masterminds. This was a situation where it needed to feel like how real people react in high adrenaline situations. They’re not confident, they’re scared. They forget. That told me a lot about the way action can feel.”

It’s why Kusama doesn’t strive to direct in something like the Marvel Cinematic Universe. Though the director saw the seismic Black Panther with her 11-year-old son, which made her “proud on behalf of our business and humanity,” she confesses that kind of filmmaking is not for her. “These stories are based on a single hero and I tend to reject that kind of storytelling.”

How about two heroes? Way back after Girlfight, Kusama said she wanted to adapt Yukio Mishima’s 1960 novel After the Banquet, where a middle-aged restaurateur falls for a retired politician in post-war Japan. “I was like, I have to make this into a movie,” she remembered about the project. She was shot down. “People were like, ‘Tell me that’s not what you want to make.’ I got shut down so quickly, I assumed it’s impossible.”

Two decades as a director and Kusama has yet to direct an “Asian” story with Asian protagonists. It’s partially by design. “This is gonna sound crazy, but my identity is my work,” she says, adding she’s “not drawn” to “simply representing myself.”

It isn’t that Kusama rejects her Japanese identity inherited from her father. “Do I see myself as Asian-American? Absolutely. That influence is almost incalculable,” she says. “But I don’t put myself in that context much. I’m always surprised to be reminded I’m Asian-American. I’m still getting to know myself.”

Maybe Kusama needs time, that great healer and great destroyer. Cinema culture and culture in general have both seen a major metamorphosis, especially with diversity—even if progress is maddeningly slow. But a viral hashtag like #OscarsSoWhite can change conversations overnight. 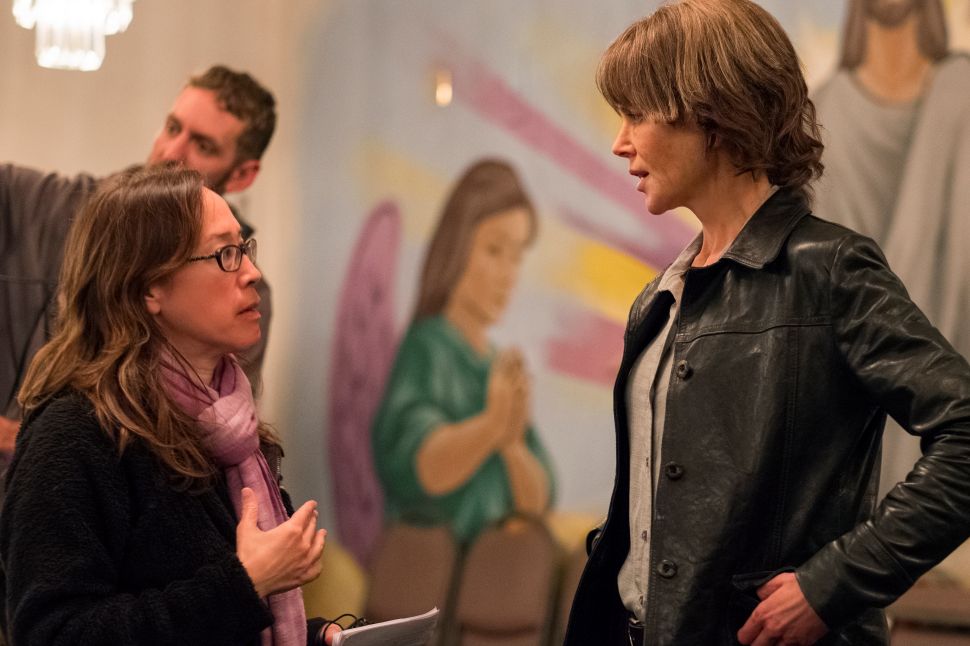