El Chapo’s 2014 capture mission started in a bathtub, and ended with a day at the beach.

In one of the most action-packed days at the trial of Joaquin “El Chapo” Guzman, onlookers heard evidence from the (alleged) drug lord’s mistress and the DEA agent who helped capture him in 2014.

On Thursday, Lucero Guadalupe Sanchez Lopez, the drug trafficker who was romantically involved with Chapo (or the mistress that was professionally involved with the cartel, depending on how you look at it), gave testimony that went far deeper than her employment.

“Until today I am still confused,” said the 29-year old. “I thought it was a relationship. We were romantically involved as partners.”

Sanchez cried during a break in her testimony, and the trial had to be delayed while she took a couple minutes to calm down. Chapo’s wife, Emma Coronel Aispuro, also 29, reportedly smiled as Sanchez, dressed in prison blues, wept on the stand.

Things heated up even more towards the end of the day, when Sanchez described a terrifying escape through the bathtub of one of El Chapo’s homes. The two had been catching up—sleeping together—in 2014 at one of his homes. At 3 or 4 a.m., as Sanchez was having trouble falling asleep, she heard loud noises outside.

Condor, Chapo’s secretary—the kind that carries a gun—busted into the room and told them to get out. Sanchez saw Chapo go to the bathroom with Condor and the maid.

El Chapo, who happened to still be naked, opened the bathtub to reveal a tunnel.

“I was very scared because it was very dark and they had all gone in there,” Sanchez said.

Sanchez, realizing she needed to go into the tunnel in order to get out, went in. When the tub closed, it left them in complete darkness; Sanchez had to feel her way through. Alone.

Chapo hadn’t left her behind when the two became romantically involved in February of 2011, when she was just 21. In fact, he welcomed her into the business.

She described herself as the “home wife” of Guzman. Her duties included buying him things like shoes, lotions and pants, which she had to hem because the legs were too long. She would buy a size 32×32, and take them down to a 32×28. Things got so hot and heavy that even other people started calling El Chapo her “husband.”

Her business-related duties involved helping to set up a juice importation business and a fish flour business—it does not matter what fish flour is, or what juices they imported, since both businesses were fronts—and obtaining marijuana from the mountains of Durango and Sinaloa. She sent the drugs back to El Chapo in 10 kilogram packages, which she sometimes marked with a heart and a four.

“The heart means that I love you, and the four means that I bless the day that you came into this world,” Sanchez revealed. El Chapo, 61, was born on April 4. Sanchez also said she never got paid for her work. If this is true, she is owed a lot of overtime.

The relationship lasted through part of 2013. It concluded officially on that night in 2014 when Sanchez popped out of a tunnel alongside the Omaya River, after being in the underground passage for a time that she said was long enough to be traumatizing.

Here, the testimony cuts off until Tuesday, when court resumes, but the ending might be pieced together from another witness who testified earlier in the day. This one comes from the other side of the reinforced front door.

Sanchez may have the headlines today, but the hero of the afternoon was Mexican born DEA agent Victor Vasquez.

He treated the gallery to a detailed account of the notorious drug trafficker’s 2014 arrest, and in the process gave one of the few positive images about the Mexican government during a trial that has been filled with tales of corruption and greed.

Vasquez talked about the bravery of the Mexican Marines who aided in the capture of El Chapo at Hotel Miramar in Mazatlán, with help from Vasquez and regular information updates from Homeland Security.

The mission started on Feb 16, 2014, when the team set up a command post in a field north of Culiacán. They realized the key to getting to El Chapo was finding a man name Naris (the nose), who was a messenger and runner of sorts and “knew absolutely everything about Guzman Lorea,” said Vasquez.

The Marines tracked him down and made him get into the passenger seat of his own car to give directions to Chapo’s various homes in the area. Two more cars with Marines followed behind, sneaking carefully to avoid detection. Using a garage door opener in the car, which to Vasquez’s surprise actually worked, they identified the home and got into position at 3:30 or 4 a.m.

Vasquez later parked his car right in the open garage.

He instructed the team to go straight into the master bathroom, where he knew the tunnel would be, and then they pounced, using a battering ram to break down the door, which was so strong that it broke the ram and they needed to use a backup.

The team finally got into the house and found the bathtub tunnel, but no Chapo. Some Marines ran down the tunnel, while others started opening manhole covers in the area to search. The bathtub tunnel was too small, and the Marines had to come back out. The manholes were small too, and volunteers were called for to go down without vests or their long guns.

They checked four more houses and found nothing except for 2,800 bags of meth and some weapons, including the famed diamond handgun.

Eventually, with the help of another informant, the team tracked El Chapo to the hotel.

Concern of word getting around of the Marine’s presence in the area, which was essentially run by the cartel, was so great that only about 25 came along to keep things as secret as possible. They went into the fishing and resort town, one or two at a time. They even stopped to buy inconspicuous vacation attire.

“We acted like we were just going to the beach, as tourists,” said Vasquez.

Just a day at the beach for 24 or 25 super fit people with guns, chilling and drinking or something.

In the first hours of February 22, 2014, the Marines surrounded the 10-story hotel, trying to take control of the building with multiple exits and entrances, blocking escape from windows and doors.

The operation was unprecedented. Vasquez stated multiple times how difficult it was to go into a cartel stronghold with just a handful of Marines and extract a leader. Initially, their path was blocked by two police cars in the front of the building, who the team feared might be corrupt.

This was one reason why the operation was staged with just the Mexican Marines: fear of a corrupt police force.

“We had done it with them before,” said Vazquez of federal police on Wednesday, “and simply the corruption level, using them again was not going to work.”

El Chapo was arrested in a fourth floor room, where he was staying with his wife, Emma Coronel Aispuro, his two young daughters and Condor—no sign of Sanchez. Maybe she was still in the tunnel.

From there, Chapo was brought down to the basement parking lot where Vasquez identified him.

“At this point, I even froze myself, and I said holy… it is him,” said Vasquez, pausing gracefully to eliminate the curse word.

Soon, they were on a Mexican Marine Learjet heading back to Mexico City. Four Marines, one admiral, Vasquez, Condor and El Chapo were the only passengers.

Of course, as anyone who’s been following the trial knows, the story does not end here. El Chapo escaped through another tunnel, this one came up through the shower of his jail cell at Altiplano prison in July 2015, just a little over a year after his capture.

He was finally recaptured in January of 2016 and is now standing trial in South Brooklyn. Hopefully the guards have checked his shower. 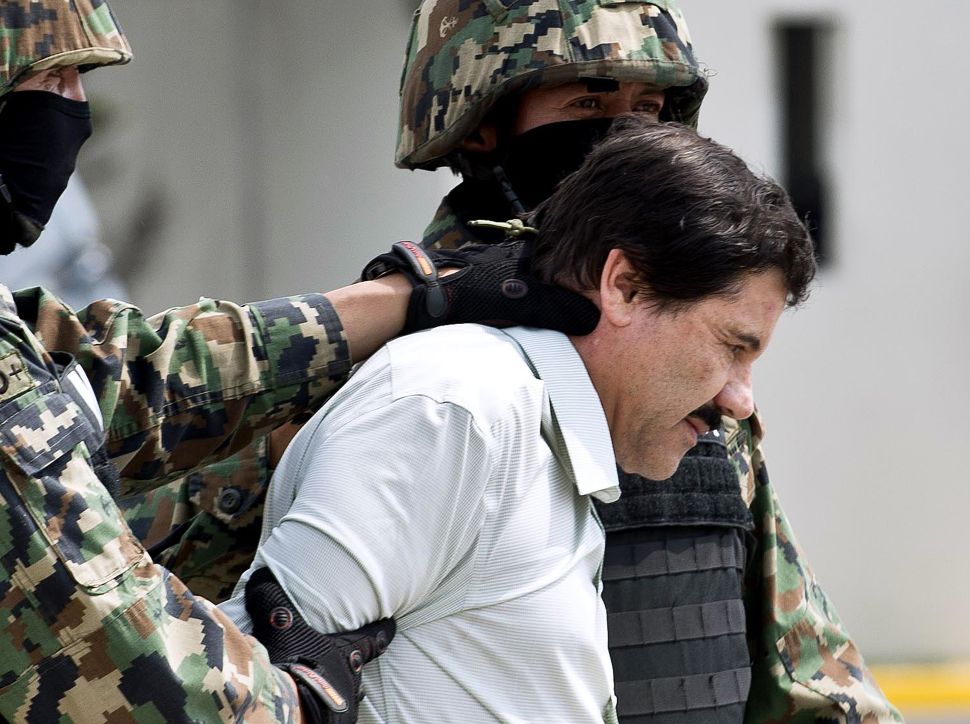