“All the investigations have impacted my career to the point where I can’t even go to the States and see my fans,” lamented the star on Wednesday morning. “Every journalist I talk to usually asks me half of the questions about Donald Trump and the other half about the music, when it should be mostly music.”

Agalarov grifted into American notoriety after emerging at the center of Russiagate for helping broker the infamous 2016 Trump Tower meeting. As his father Aras Agalarov’s business dealings with President Trump came under greater scrutiny by investigators—which more recently include the stalled Trump Tower real estate development in Moscow, and whether or not the president directed Michael Cohen to lie before Congress about how far the deal extended into the 2016 election—the singer parodied his saga.

To promote his new album, Good Love, Agalarov released a music video last summer satirizing Mueller’s investigation. Dubbed a “new standard for geopolitical trolling” by The Washington Post, ‘Got Me Good’ features the Russian singer cavorting alongside stand-ins for Donald Trump, Hillary Clinton and Mark Zuckerberg throughout a Moscow hotel—arriving in the same suite referenced by the unverified Christopher Steele dossier, in which the president is said to have engaged in lewd sexual acts with prostitutes.

“We all felt that it was quite funny to film a video with all the secret cameras, especially when I was accused of supplying girls to Donald Trump’s hotel during his stay in Moscow,” Agalarov told Observer. “As I walked through the corridors of the hotel where [Trump] stayed, I kept singing the song, which made it even more funny I think.”

Observer spoke with the controversial oligarch’s son about the stalled Trump Tower Moscow deal, his interactions with the president during the Miss Universe pageant, and what it was like collaborating with German DJ Robin Schultz on his new album.

What are you doing instead of coming to the United States?
Grand plans. I’ll probably take a vacation because I allocated about three or four weeks of paid time to come to the United States to do the show and see my friends and family who live over there. Now, all those plans are gone, I can definitely take some time off from my day-time job.

How long did the album take you to make?
Three years. It actually took me three years.

What was it like collaborating with Robin Schultz on the track Let Me Go?
Robin is a fantastic, super successful DJ producer. When we wrote the song initially, ‘Let Me Go,’ we always felt the song really had something special about it. In the DNA of the song, it had a little bit of Robin Schultz already. He approached the song and liked it, and it became a collaboration, which hopefully will have some amazing opportunities for my music career worldwide.

How has Mueller’s investigation and your relationship with Donald Trump impacted your career?
All the investigations have impacted my career to the point where I can’t even go to the States and see my fans. That’s it. Every journalist I talk to usually asks me half of the questions about Donald Trump and the other half about the music, when it should be mostly music.

You recently told Bloomberg that the U.S. has attempted to turn you into this “circus show” because of the Russia investigation. But at the same time you’re having a little bit of fun with all of this, like with the Got Me Good music video. How do you reconcile these two outlooks?
I’m still having fun with everything. I take life very humorously. We live to enjoy, and obviously work to enjoy. Every accusation that has been made my way that I’m a spy or I have secret information on Zuckerberg or Hillary or elections or rigged elections, everything I read in a headline, we put it in one funny video, called ‘Got Me Good,’ basically to underline how ridiculous those accusations are. I think the American people view me as this secret Russian spy who has done some ridiculous things, but those that know me in Russia know me as a music producer and an entertainer. I do about 100 shows a year around Russia and Europe. I produce festivals, musical awards, a lot of televised projects. I’m constantly present in the Russian show business scene here in Russia. For me to be interested or involved in anything shady would be the most ridiculous thing you can imagine.

The Washington Post called the Got Me Good video “a new standard for geopolitical trolling.” Do you agree with this assessment?
[Laughing] I don’t know. We hadn’t put that much thought into it. It wasn’t as deep as people think, that we actually sat down and figured out a way to troll anybody. The music director I worked with sent me a couple of options for a treatment for my new single ‘Got Me Good.’ And one of them was this one. And we all felt that it was quite funny to film a video with all the secret cameras, especially when I was accused of supplying girls to Donald Trump’s hotel during his stay in Moscow. Considering that at the time when he was here, he had 87 of the most beautiful women of the world, the finalists from every country—Miss Brazil, Miss United Kingdom, Miss Germany, Miss America. Eighty-seven of them! And I would walk up to him and say, “Mr. Trump would you like some Russian girls?” He said, “Fuck you.”

What has been the reception to Got Me Good in Moscow?
I think it put a smile on people’s face. I think, generally, people like to see doubles in movies of famous people. It’s quite hilarious, Hillary and Zuckerberg. As I walked through the corridors of the hotel where [Trump] stayed, I kept singing the song, which made it even more funny I think.

Has this music video, and a lot of what’s going on with the Russia investigation, expanded your American fanbase?
Yes and no. On one side, it gives you decent exposure, but not the kind you want as an artist. If you want to grow as an artist, you want music exposure. “Oh look at this guy, he had a great video. Look at this guy, he had a great single or song.” Internationally, especially in the United States, I think I’m viewed as, “Look at this guy who was involved in Trump’s meeting.” Music becomes secondary and it prevents me from developing my music career. In a way, if I were to say whether it was positive or negative, it’s definitely a negative for my music career.

How are you moving to get beyond that?
Simple, let’s wait for the investigation to end.

What do you see your career looking like once it does?
The same. I’ll come to the States, and we’ll be able to add more dates and tour.

At various points before and after Trump announced his run, you represented to the Trumps you could arrange a meeting between Trump and Putin. Who gave that authority?
Nobody gave authority. It’s not like I could call President Putin and say, “Hey, will you meet Mr. Trump?” It doesn’t work like that. Bringing an event of world level to the country, like the Olympics, like the World Cup, like Miss Universe, was one of the events where you’d like to invite the president. And that my full intention. It wasn’t simply to meet Trump or to be introduced to Trump, it was 100 percent to elevate the event.

Did you discuss this with anybody?
No, I haven’t discussed it with anybody. It was an idea everyone involved in the contest wanted to make happen, obviously. Wherever the contest goes, if it goes to the Philippines, you want to invite the president of the Philippines. If it goes to Brazil, you want to invite the president of Brazil. Just like when you’re creating a soccer world cup, you want to make sure the president attends at least one match. It makes it more exciting for the country and for the sponsors and for the partners and for everyone else involved. It just makes the event more credible.

While in Russia, Trump signed a letter of intent to build a multibillion dollar Trump Tower Moscow with your father. Both of them had financing, a site and architectural plans. You discussed this with Forbes in 2017 and then retracted the statement. Did anyone tell you to do this?
No, nobody told me that. We just checked after the interview whether I have or have not known that work, and whether we signed or not. I’m just not sure whether we signed. I don’t know why. But it’s irrelevant completely because whether we did or whether we didn’t, the project never went through. And we definitely never signed any contract, so the idea was to sign some sort of letter of intent, which I didn’t actually know at the time of my interview whether we eventually signed or not because it was out of my jurisdiction—it was somebody else at the company handling. And lately in the interview, I said it before, I actually checked. Whether it was signed or wasn’t signed, it’s a meaningless document.

Thanks for clarifying.
It’s just ridiculous. 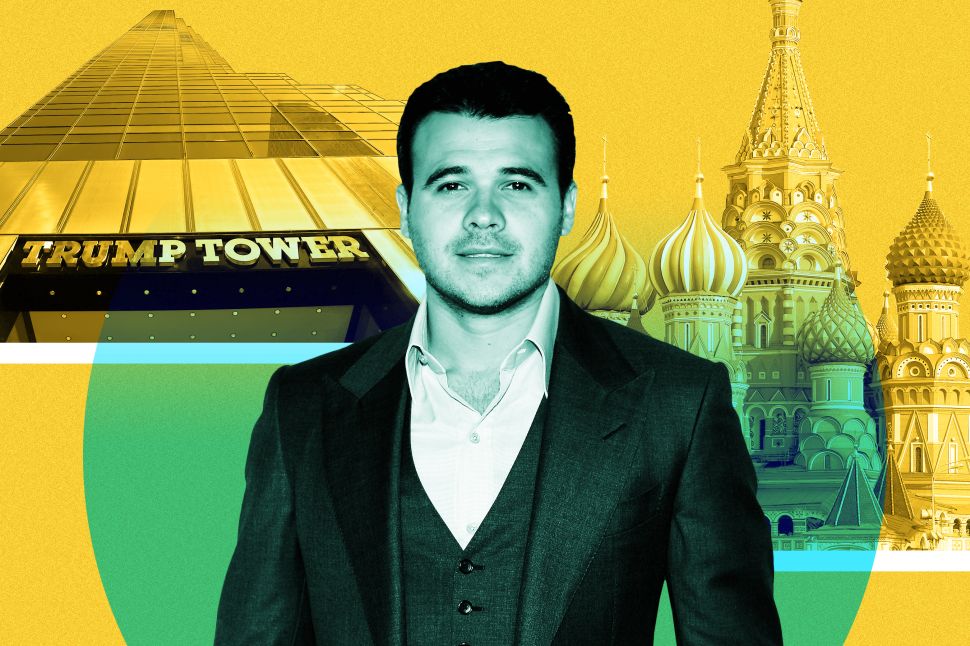