They say don’t meet your heroes; it only leads to disillusionment. But in my line of work, it’s hard to avoid repeat exposure to artists who, when I was young, seemed more like rock stars than mere playwrights. Even the densest marble icon will crack. Take Sam Shepard. In my teen and college years he was a god: Leather-jacketed, cowboy-booted proof that a life in theater was sexy and dangerous, a pathway to fame. Shepard’s jazzy frontier nihilism exploded adolescent heads across the nation. He effectively fused punk, Beckett and ’60s Pop Art for a generation raised on TV but drawn to the stage. He dated a movie star. He was a movie star. If he didn’t inspire you to write your own damn play, he inspired you to do True West in scene study class and beat the crap out of some poor chair, or yourself, in pursuit of theatrical truth.

Whether his plays stand the test of time is another question. Recent revivals of Fool for Love (Manhattan Theatre Club) and A Lie of the Mind and Buried Child (The New Group) have contained dazzling performances or directorial flourishes, but they’ve diminished, rather than burnished, Shepard’s glory—at least in my eyes. There’s the rangy, restless energy and riffs of jagged poetry, but the dramaturgy can come across as shaggy or improvised, the worldview shallow and secondhand. Then there are Shepard’s final stage works, before the great man’s death in 2017—Ages of the Moon, Kicking a Dead Horse, Heartless. These were uneven at best, self-derivative and self-parodic at worst. The long arc of Shepard’s career might convince you that playwriting is a young person’s game, and that revivals can do as much damage as good.

I’d like to believe that you can’t screw up True West—easily one of his top five greatest. Two brothers face off: Austin is an emotionally repressed family man struggling as a Hollywood screenwriter; Lee’s a beer-swilling petty criminal and drifter who bullies his younger sibling and takes after their alcoholic, estranged father. The boys vie for territorial (and psychological) control in their mother’s tacky suburban kitchen while she’s on vacation in Alaska. There’s a smooth, oily movie producer who gets hustled by Lee and agrees to develop his cheesy neo-Western idea, which Austin loathes but is forced to work on. Over the course of a long night and into dawn, the two devolve from polite family tension to fratricidal rivalry and rage, fueled by booze and punctuated by the mass theft of toasters from neighborhood houses. An entire loaf of Wonder Bread is toasted, buttered, and—spoiler!—hurled against the low ceiling and finally crunched underfoot. The typewriter gets pulverized by a golf club. Kitchen drawers are yanked out, emptied and tossed aside. When Shepard does kitchen-sink drama, the kitchen is trashed.

So True West is rock and roll theater, but it doesn’t rock out all by its own; casting is key. Every generation gets the True West it deserves—or can muster. After a strong world premiere in 1980 in San Francisco, it was disastrously produced by Joseph Papp at the Public Theater with the miserably miscast Tommy Lee Jones and Peter Boyle. Director Robert Woodruff quit, and Shepard disowned the affair. Two years later in Chicago, a grunge-tastic Steppenwolf production starring Gary Sinise as Austin and John Malkovich as Lee transferred to Off Broadway, ran for two years, and was broadcast into the cerebral cortexes of impressionable theater geeks on PBS’s American Playhouse. So far, so canon. Then in 2000, Philip Seymour Hoffman and John C. Reilly pulled off a crazy stunt, switching roles in different performances. The two actors were utterly electric and over-the-top, and the sharing of roles emphasized a sense that the play is about a schizoid personality, or Shepard meditating on the two sides of his own artist/outlaw persona. To my chagrin, I only saw it once, with Hoffman as Austin—but in my wishful imagination, he’s playing both.

Now the Roundabout Theatre Company takes a whack at this testosterone- and booze-soaked brotherly beatdown, and the results are disappointingly wan. First, credit where it’s due: British director James Macdonald treats the script as if it were a well-built drama, and not the scrappy excuse for histrionics and set bashing that it basically is. Macdonald’s intelligent, detailed work reveals the play’s symmetries, its nicely orchestrated musical qualities that alternate crashing violence and noise with hushed moments of melancholy. In other words, this is the most well-behaved True West I’ve ever seen. That’s not necessarily a good thing. Certainly, Ethan Hawke puts plenty of swagger and anarchic zest into Lee, puffing out a little beer belly and spilling as much whiskey as he pours down his gullet. You can practically smell the diesel-laced B.O. coming off his sagging, yellowed A-frame. For the first half of the show, Dano provides a neat counterpoint, in his clean jeans and buttoned Oxford, excessively polite to his wastrel brother and doing a pretty good job of hiding his contempt.

The problem comes when Lee starts to gain an edge with fatuous producer Saul (Gary Wilmes, amusingly slick), the alcohol flows, and the brothers start to fight over what’s true and what fake. There needs to be a subtle but definite psychic flip, where each brother starts to take on the other’s qualities. And while Hawke can modulate greaseball macho swagger into helpless, boyish terror, Dano can’t seem to access Austin’s inner killer, his sadistic glee at Lee’s frailties. You could say the actors are too well cast; they can’t fully transcend their familiar acting tricks. Or perhaps Macdonald wanted to get away from the duality reading of the characters, since Austin is in fact ten years younger. But there’s not enough back story or subtext for that decision to unlock the text in a fruitful way.

The design is very strong, with Mimi Lien’s drolly claustrophobic kitchen, obtrusive shelving and a surprise vista (revealed at the end). Jane Cox’s lights contribute intelligently to meta-cinematic effects that connect to the Hollywood/Western theme. And there are very effective, near-subliminal background sounds mixed up by Bray Poor. Again, this is the most tender and understated version I’ve seen of a piece that is traditionally rendered as the Monster Trucks of dysfunctional sibling dramas. Something must be gained in that, if something else is lost. I guess we’ll have to wait 15 or so years for a truer True West. 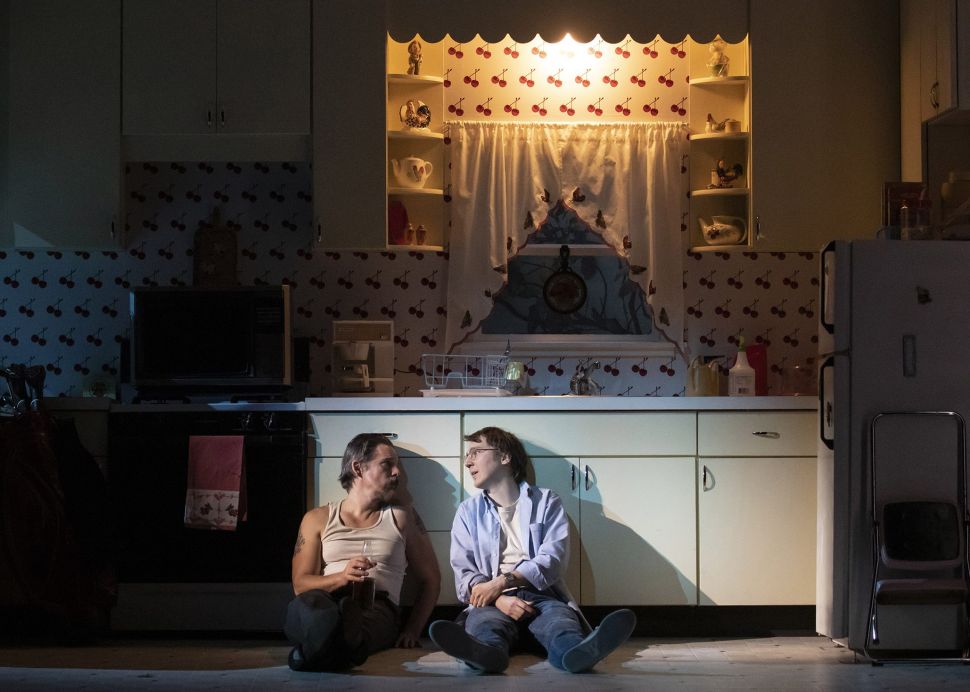