For us mortals, a New Year’s resolution is something merely made up to be forgotten before the end of February. But for rare overachievers, like Facebook CEO Mark Zuckerberg, it’s as serious as a company’s annual financial report.

Every January since 2009, Zuckerberg has announced his own personal challenge on Facebook—and has accomplished them all. His past years’ challenges touched on everything from reading more books to adopting a vegetarian diet to learning a foreign language.

But this year, his personal challenge sounds like nothing personal. On Tuesday, Zuckerberg announced on Facebook that his goal for 2019 was to host a sort of “talk show” series to discuss “the future of technology in society”—specifically, “the opportunities, the challenges, the hopes and the anxieties,” he wrote.

By all measures, Zuckerberg’s 2019 resolution is a drastic departure from his early years’ more casual, personal goals. But, come to think of it, it’s also a natural extension to what the 34-year-old entrepreneur was doing for most of 2018.

“Last year, I focused almost all my time on addressing important issues around elections, speech, privacy, and well-being,” he explained. “Facebook is a different company now than it was a couple of years ago because of a much greater focus on these questions. These issues are complex and we will continue focusing on them for years to come.”

While it’s comforting to know that the young boss of Facebook finally cares about the impact of his work on society, it’s a tad sad to see the former-Harvard wunderkind parting ways with the quirky, sometimes confusing, hobby ideas of his 20s.

Here is a look back at every personal challenge Zuckerberg has set out to accomplish in the past decade.

Exactly a decade ago, America was still living in the aftershock of the 2008 Financial Crisis, and Facebook was just a five-year-old startup founded by a college dropout, which was why its then 24-year-old founder Zuckerberg was eager to prove to the world that he was enough of an adult to run a real company. To start with, he decided to polish up his signature “T-shirt and jeans” look.

“After the start of the recession in 2008, I wanted to signal to everyone at Facebook that this was a serious year for us,” Zuckerberg wrote on his Facebook page. “Great companies also make sure they’re financially strong and sustainable. My tie was the symbol of how serious and important a year this was.”

In 2010, Zuckerberg said he wanted to learn Mandarin so he could better communicate with the family of his then-girlfriend, now wife, Priscilla Chan and, more importantly, to help Facebook gain a foothold in China.

Although Facebook’s China effort has failed more than once since then, Zuckerberg proved that his aptitude for acquiring a foreign language is just as impressive as his programming skills. (And, as a native Mandarin speaker, I’ve got to say his Mandarin is far more fluent than that of his American-born wife.)

In 2011, Zuckerberg decided to become a vegetarian for a year as a way to “practice thankfulness.”

“I think many people forget that a living being has to die for you to eat meat, so my goal revolves around not letting myself forget that and being thankful for what I have,” he wrote.

But there was a bizarre exception: he said he would only eat meat that he’d slaughtered himself.

Unsurprisingly, his reasoning ignited some heated discussion on the internet, including this YouTube video titled “Animals Taste Better If You Kill Them Yourself: Mark Zuckerberg.”

After two years of self-improving through adopting new hobbies, in 2012, Zuckerberg resolved to return to his old profession, programming, for a while. He said he wanted to brush up his coding skills to better communicate with Facebook engineers and understand the company at its most granular level.

Feeling a bit of burnout from work, in 2013, Zuckerberg said he wanted to meet someone new everyday outside Facebook.

“It’s going well—I’ve done a bunch of things in the community and just tried to get broader exposure,” he said in an interview with Fortune midyear.

In 2014, Zuckerberg realized that actions needed to be taken to cure his cynicism. “[The goal] is important for me because I’m a really critical person. I always kind of see how I want things to be better, and I’m generally not happy with how things are,” he confessed in an interview with Bloomberg in 2014.

Taking a page from his last-generation tech billionaire peer Bill Gates, Zuckerberg decided to appreciate books more in 2015. He set a goal for himself to read 25 books in a year. Also like Gates, he prioritized books in culture, history, religion and technology.

2016 was the year in which artificial intelligence began to gain mainstream buzz. So it made perfect sense for the CEO of the world’s largest social media site to want to jump onto the bandwagon before it was too late.

Zuckerberg said in January 2016 that he’d like to build an A.I.-powered smart home system for his own house, with functions such as recognizing his friends’ faces at the door and monitoring activities in his daughter’s room.

Let’s also not forget that 2016 was the year of the U.S. presidential election and, in hindsight, the beginning of Facebook’s reputation crisis which has embattled the company till today.

As expected, 2016 was a tough year for everyone, particularly Zuckerberg, as initial reports connecting Facebook to the Russian interference during the presidential election emerged.

So he decided to take some time off and travel to 30 U.S. states that he’d never been to before.

“After a tumultuous last year, my hope for this challenge is to get out and talk to more people about how they’re living, working and thinking about the future,” he wrote.

Then, after a year of soul-searching travel, Zuckerberg came back in 2018 with an ambitious goal: “to fix Facebook.”

As we’ve seen, for the better part of 2018, Zuckerberg appeared again and again in his new “suit-and-tie” outfit as the spokesman for Facebook from Capitol Hill to the U.K. Parliament, defending Facebook in privacy breach scandals and promising the world that Facebook won’t ruin democracy.

But apparently, what he has done is far from enough, both for Facebook and for its two billion users worldwide. As of January, Facebook stock is down one third from it’s 12-month peak. And the company’s 34-year-old boss is calling for help from the world’s brightest minds—for a chat on his upcoming “talk show.” 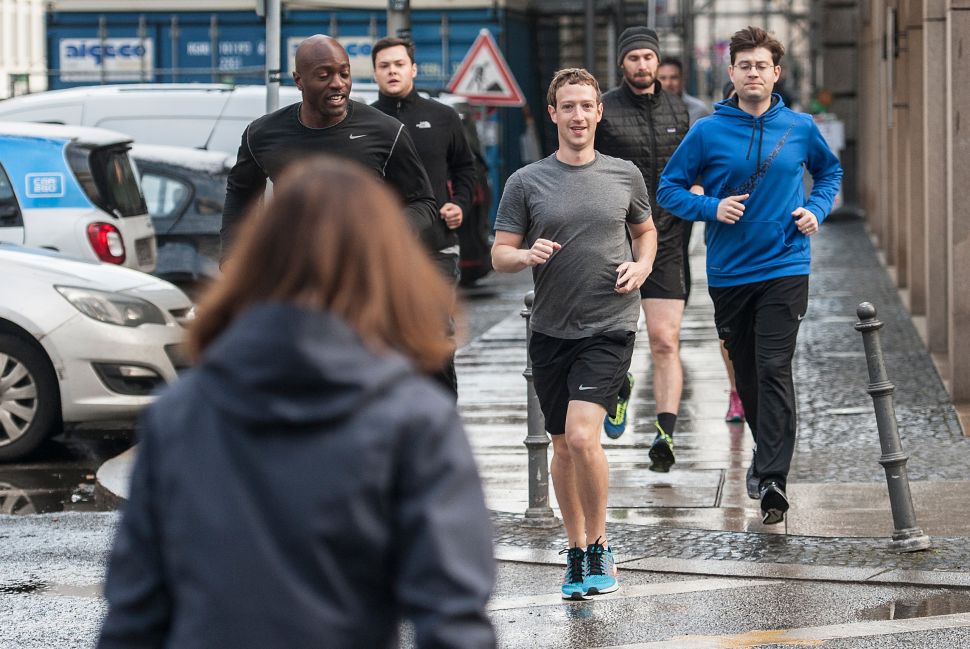