The restaurant industry can change as quickly as the tableware; trends come and go like busboys, moving silently among patrons.

As a whole, the industry is growing, but somewhat cautiously.

In their October 2018 economic snapshot (the most current data sample available) the National Restaurant Association reported that only 22 percent of restaurant owners expected the economy to improve in six months, and only 41 percent expect higher sales in that time. These numbers are up from September, but still highlight a lack of faith.

With over a million restaurants in the United States today, it can be tough to stand out and stay ahead of the industry curve that is notoriously steep, albeit over-exaggerated. Still, on average, restaurants can only expect a three to five percent profit margin. That means chefs and owners are constantly searching for new ways to turn a profit, and it’s altering the landscape of food service.

While not a traditional restaurant, FreshDirect has placed itself at the forefront of an emerging trend by delivering home cooked, restaurant quality meals to customers, in addition to meal prep ingredients and essential household items.

“We’re delivering everything to people at their home,” said Eric Ingoglia, the head of meat, seafood, deli and kitchen operations at FreshDirect. “If you look at restaurants across the industry, so many of them have their normal production—their brick-and-mortar facility—but they also have an online presence over there. They’ll take orders and they’ll deliver.”

FreshDirect capitalizes on a desire for convenience and high quality products. It gives customers the ability to get whatever they want, whenever they want it. Though a large company, FreshDirect succeeds by having a custom touch.

Smaller, individual-owned restaurants have also begun to operate using this model, though the new trend is not without its challenges.

Food trucks have boomed in recent years and provide fast, often cheap and unique, meals to people. They have been viewed as a cheaper business model compared to starting a brick-and-mortar facility.

Overhead is low, as are labor costs, so the thought process goes. But Jason Price, who operates Plaid Pig—a small public relations company that serves restaurants in the Seattle area—says that food trucks face major operational expenses. Rent, he found, can be up to $3,000 a month. Couple that with inconsistent sales, food costs and the occasional theft of products, and Price believes it would be hard for a Seattle food truck to even turn a profit.

“It’s not really an attractive business to get into unless you’ve seen Jon Favreau in Chef and you want to be a romantic, and try to live that life,” said Price.

What food trucks do provide, however, is a way in the door, since they have a lower startup cost than traditional restaurants.

“For a fraction of that cost you can go that route and see if people even like what you are gonna produce, and then build your brand, and gain a following so then when you finally do open [a traditional restaurant], you’ve got some cache [with] the people who have been eating your food for, a year, let’s say,” said Price.

The best food trucks are successful because of their ability to go anywhere and often cater weddings and large events—in addition to their street service—so they can reach a large number of people at once, according to Price. Even in the age of delivery, businesses must rely on personalized service.

One Seattle chef is combining all of these traits to create an innovative, personalized, restaurant dining experience.

“I started my restaurant in my house,” said Eric Rivera, chef and owner of the Eric Rivera Cooks restaurant group. He began by doing tastings in his home for people and pop-up restaurant events wherever he could. This allowed him to meet clients and network, and eventually led to finding a permanent restaurant space without the help, or creative restrictions, of investors.

Rivera works “on demand” and hires staff based on the number of tickets sold for his restaurant experience that evening. He has two full-time staff members but can employ up to 40 people depending on the event.

By interacting with his customer base, Rivera has been able to tailor his restaurant to their desires. He is not held down by any one concept, but rather features a unique and changing menu. He does brunches, burger experiences, weddings, corporate lunches and is even leading a sold-out cooking trip to Puerto Rico—the land of his heritage—all based on what the customer wants.

“I find out what they like, and then if I have enough people, and I’m face-to-face with them, and I find out that eight out of the 12 people that I talk to like beef, for example, and they love steaks. Guess what I can do? I can make a steak night,” he said.

He compares the process of creating his restaurant to the way Chicago musician Chance the Rapper rose to fame by generating buzz with his free mixtapes and concerts.

“When I’m at a burger pop-up or an inexpensive food style pop-up, you know, I’m not worried about making all the money right there,” said Rivera. “For me, those cheaper things are the calling card, and I’m capping sales at a certain point where I’m going, ‘Hey, this allows me more face time with the guests to tell them what I’m really working on.'”

With this method, he has built a robust email list and a base of loyal customers.

One such customer, Heather Morelli, has been eating Rivera’s food since before his main restaurant addo launched. She made it clear that his success is not just because of his skills in the kitchen, but also his ability to connect with customers.

“It was a very targeted ‘buy a ticket to this event so that you know what you are getting in advance’ [approach], and you’re making a concerted effort to go to his meals,” she said. “He had all these ideas that are changing to keep me interested.”

Hello December. Additionally, we are booking through February. So get in here. New experiences in the process of being loaded up: Seuss, InSaNiS Valentine's, Lechoncito ala libra, burrito time, Super Bowl Packs, Christmas Pernil, Szechuan, Lechoncito Frituras, DiVe Singles Night, DiVe head to head video game tournaments, Bingo, Switch Monopoly, and so much more. @addoseattle, why go anywhere else?

Of course, the food is ultimately what keeps her coming back. One event Morelli attended was a vampire movie night where all the dishes were blood themed.

“We had spaghetti, but it didn’t look like your usual spaghetti,” she said with glee. “You were like, ‘oh my goodness. This looks like really bloody spaghetti here.'”

Bloody food might be a hard sell for another chef, but not Rivera. “You were fascinated by the marriage between the movie and the food and how good it tasted,” said Morelli. Not grossed out.

This type of creativity and an ever changing menu makes it easy for Rivera’s customers to be willing to try new things. “You don’t have to be concerned that you’re not going to get your favorite dish because what he’s putting out is so yummy anyway,” Morelli added.

The addo chef provides more than an experience to his patrons; he also gives opportunity. He has taken his pop-up restaurant model and turned it into a way for aspiring chefs to try out their ideas.

Rivera refers to the model as an incubator. He helps aspiring chefs set up pop-up events in his restaurant spaces, then signs 90-day contracts with the promising ones and splits the profits. These chefs are often new or inexperienced (some without any restaurant experience), and Rivera helps them get their cooking in front of paying customers as a trial run. He says a bagel shop and a place that specializes in gluten-free donuts are opening as a result.

Though the incubators do not make very much money, he looks at them as a way to help others gain a foothold in a tough industry, the same way he did.

Eric Rivera is not the only one experimenting with different food concepts and restaurant spaces. Brooklyn Braised is a new restaurant operating out of the Body By Brooklyn spa in Clinton Hill, Brooklyn.

The restaurant started out as a meal prep service, then added custom catering, and finally the full-fledged restaurant opened its doors in September 2018.

Christa Lynch, the founder and owner, calls her spot a “culinary concept” because the restaurant’s small, personal nature allows them to work with more food and reach more people. Brooklyn Braised is not tethered to any one concept, the way a traditional burger joint is.

“Because what we do is custom, and we spend a lot of time putting together menus, we’re able to charge a certain amount, you know, which allows everything to stay afloat,” said Lynch. “We don’t have a tiered menu, a set menu. Everything we do is custom for our particular client.”

So far, the restaurant has been helped by a profitable catering business and low overhead at the spa. Though it is still too early to tell how successful they will be, the staff believes in Lynch’s recipe.

“I stepped out of restaurants because they’re not going anywhere,” said chef Terence Harvey, who formerly worked for Lynch at Brooklyn Braised. “It’s too shaky ground to play that game. I don’t have the time to go broke.”

Convinced there were ways to make money in the industry without the trials of being a chef, Harvey considered being a food photographer, then worked to build My Cooking Party, a business that offers culinary classes and corporate team building events, before taking on his role at Brooklyn Braised.

“We ended up doing this, but it’s not the same,” he said. Because the main business comes from other ventures, Harvey does not consider Brooklyn Braised to be a traditional restaurant.

However successful Lynch’s concept turns out to be, it follows an emerging trend in the food industry by operating in a flexible work environment, catering directly to the needs of the customer and providing an interesting, diverse menu that hopes to draw in a loyal base.

In an industry that requires its participants to stay ahead of the curve, or risk getting left behind, these qualities may prove important to creating the modern restaurant. 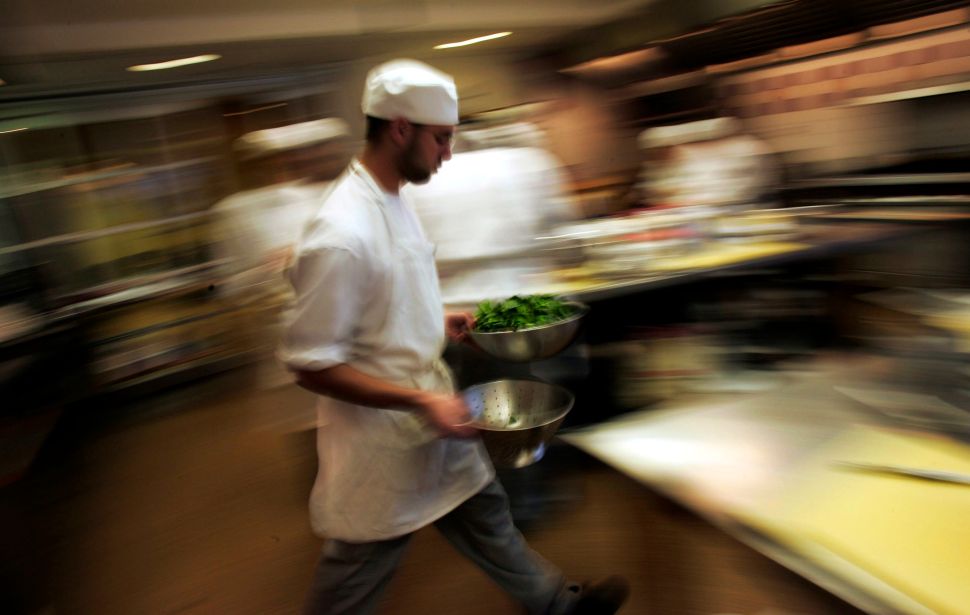