In late April 2017, social media was able to come together in a collective act of schadenfreude over the ridiculous debacle that was Fyre Festival. For months, Fyre Media founder Billy McFarland and rapper Ja Rule had hyped the event. It would be a new kind of music festival, an incredibly high-end and luxurious experience all set in the Bahamas. Instead, when hundreds of attendees showed up, they discovered that there was no organization, almost no food and nothing but rinky-dink tents that resembled ones frequently used by FEMA for them to stay in.

The plight of people stranded on the island and posting their woes went viral online, and the mind-boggling amount of mismanagement behind the scenes at Fyre Media soon came to light. Multiple lawsuits and a criminal investigation have followed. Now, director Chris Smith (American Movie, Jim & Andy: The Great Beyond) has made a documentary about the whole affair, which comes out in theaters and on Netflix on January 18. Smith spoke with Observer about scavenging the digital landscape for information as a filmmaker today.

Observer: Did you follow the Fyre Festival debacle as it was happening? I distinctly remember watching it unfold in real-time on sites like Twitter and Instagram.
Chris Smith: I didn’t! That’s what was odd. I was in production on another documentary, and I remember seeing a couple of headlines. I have this running list that I keep of ideas for projects, and I wrote it on there, and then forgot about it.

And then in September of 2017, when that project was wrapping up, I went back to this list. I started looking into it, and I was surprised to find that there was a ton of coverage on Fyre, but very little actual information. You couldn’t really get a full sense of what had happened. That’s how it started. I didn’t know whether there would be a great story here or not. I just thought it was worth investigating.

What went into reconstructing the timeline of events?
We looked at anything and everything related to Fyre. There was a guy named Seth Crossno who was live-tweeting the festival. He was the most prominent of the people who were documenting it in real time—he was on different news platforms too, like TMZ. So, that was the closest that we got to finding the person that seemed like they were the most prominent in terms of on-the-ground coverage.

This film chronicles a very new form of grifting. It recalls similar scandals, like Theranos; there’s this pattern of familiar markers where you would think someone would have said something. There’s a kinship between Billy McFarland and the subjects of your other films.
I think you just work on what’s interesting to you. I was curious about this story, and then I became curious about Billy, and how he definitely feels like a product of this time. He was able to achieve a lot of perceived success at a young age, based on selling this dream. That, to me, was interesting, how he was selling this lifestyle, yet it was all built on a bad foundation. And in a lot of ways, that’s the world a lot of people are growing up in.

When it comes to these modern scams, the challenging part is that in a world where we’re all so busy, you assume that somebody else did the homework. So if your friend tells you that this is a great deal, and you’re seeing some paperwork that says that they’re making $34 million, you take those things at face value. After all, it’s illegal to be raising money off of false numbers, right?

I think it’s the same with Theranos. There’s a point where there’s a collective sensibility that this thing is valid, just based upon everything else that surrounds it. That’s what enables people like Billy to get so far.

You recreate this illusion he projected with some choice primary materials, like behind-the-scenes footage from photo shoots. How did you obtain stuff like that?
A lot of it was online. When Fyre was imploding, there was a lot of documentation that was leaked to the press. If you put in the research, you can reconstruct the whole thing through these disparate sources. So we had this archeological project of trying to find as much as we could to tell the story.

Doing so much online research was new to me. It was amazing to me that at random times, I would put in different search terms and find something different that I hadn’t seen before. Just the other day, we found all these screen grabs of the actual Fyre site by looking up a specific engineer and the word “Fyre.” I was just looking for an email, but found all this material we had never seen before. It was too late to put in the movie, though. And we thought that we had been so thorough.

I think it’s a testament to how in the digital age, with something as big as Fyre, there’s forensic evidence everywhere. To remove its whole digital footprint would be very difficult. Seeing how far and wide all these different bits and pieces traveled was eye-opening.

The movie is mostly constructed very traditionally. Did you consider working the aesthetic of the internet, like social media, into it?
We played with different ideas, but for me, it’s always about letting the story be the central focus, instead of making it about the form. And I was interested in putting a human face on this story, because I felt like it was so sensationalized in the press. I wanted to look at the people involved, how they got wrapped up in this mess, and the effect it had on them.

One thing that struck me is a scene in which the company talks about posting just blank blocks of “Fyre Orange” on Instagram to promote the festival, that no one bats an eye at this. Do you think viewers in the future may be even more confused by the marketing tactics of today?
I don’t even think people understood it at the time. Billy even says, “People will be posting the ambiguous burnt orange Fyre tile.” I think that with the imagery in the movie, what it means starts to become clear when you see it propagating itself and expanding, and people looking at it and their Instagram feed is all orange. Even if you don’t understand it intellectually, you get on a gut level what’s happening there.

There’s an obvious humor built into this story. When I was following it, most of my Twitter feed was dedicated to making fun of these rich people trapped on this island. How do you balance that human comedy with making sure you’re not being too mean-spirited?
We tried to find people who attended the festival that were relatable. There are three or four main attendees we interviewed, and I really liked all of them. I think Mark Crawford is incredibly charismatic and funny in his ability to recall and tell the story. Finding people viewers could connect to was the key to making that section work. In any event, there are all different types of people involved. Certain other subjects may not have come across as well on film, and I wouldn’t have been comfortable putting them forward. I genuinely liked the people we filmed, and I was interested to hear their perspectives. 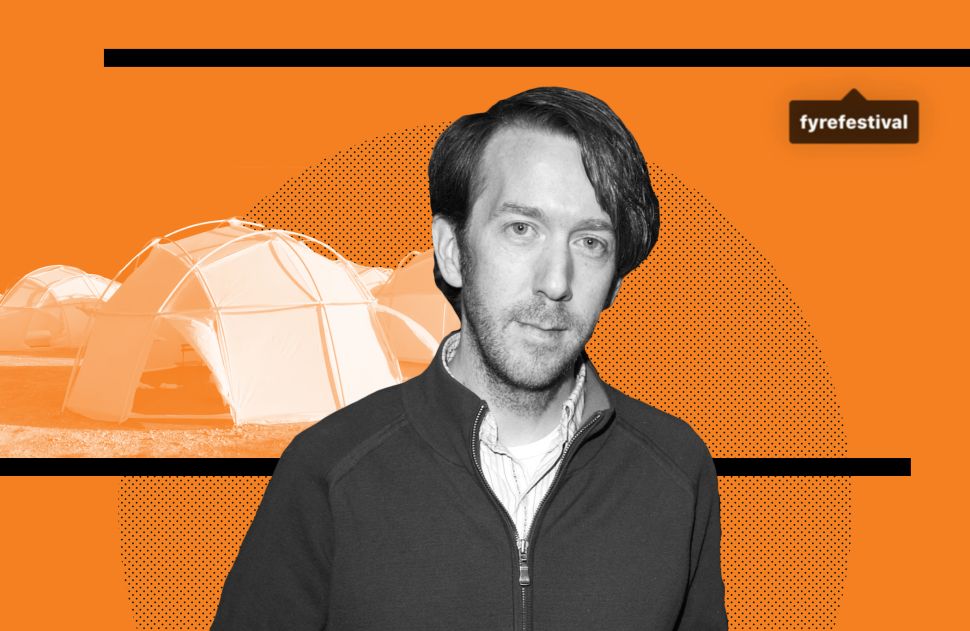