Charles Darwin famously said that any man who dares to waste an hour of time hasn’t discovered the value of life. These words are taken deeply to heart by Lindblad Expeditions-National Geographic, an alliance chartering travelers to the wildest corners of the planet via a fleet of nimble, “intimately scaled” ships. One of its voyages is through the Galápagos Islands, the pristine archipelago 600 miles off the coast of Ecuador that catalyzed Darwin’s theory of evolution—and where, true to his philosophy, nary a minute is wasted.

From sunrise to sunset, every hour of Lindblad’s 10-day expedition is meticulously scheduled. At 6:30 each morning, guests are rustled awake via an intercom system that rings through the 96-passenger National Geographic Endeavour II. A fraction of the size of traditional cruise ships, Endeavour II is small enough to tuck in between the narrow waterways of this remote set of islands. And, perhaps most important, the craft is detailed with every comfort one might expect from a vacation costing upwards of $13,000 a week per couple.

Though small, the Endeavour II is efficient in design, offering ample storage for more than a week’s worth of gear needed to trek across volcanic terrain and swim through reef-encrusted caves. Cabins are stocked with local toiletries, adorned with bright photography and cozied up with rich bedding (its creases look like they are smoothed over by the staff the minute guests exit their rooms).

In the dining room, a thrice-daily feast of local, sustainable, Ecuadorian cuisine is served against a backdrop of crisp linens, colorful fruits and fresh flowers. A dozen sleek lounge chairs line the rooftop observation deck, and two floors below plush seating fills the wood-paneled barroom where tropical cocktails flow freely all day.

But the real gem of the Endeavour II is a library whose shelves burst with the sort of unbelievable stories that conjure the old adage “truth is stranger than fiction.” Between vibrantly illustrated nature books and Darwin’s own writings (obviously) sit several iterations of the narrative that inspired the historical documentary The Galapagos Affair: Satan Came to Eden. That drama of lust, murder and royalty in 1930s Galápagos has thankfully not been repeated on any Lindblad-National Geographic trip.

After breakfast, guests follow a crew of veteran naturalists down the stern of Endeavour II to disembark the ship, climbing into the same rubber zodiac rafts used by the U.S. military to raid enemy shores. Holding 14 people each, the zodiacs take turns zipping their passengers across choppy waters before making landfall on one of the 13 major islands. For the next several hours, the groups hike up red-dust cliffs and wind through lush flora, all the while quietly observing the more than 2,000 species of mammals, birds and reptiles that inhabit the Galápagos.

Many of these animals are found nowhere else in the world—and all of them are what the naturalists call “evolutionarily naive.” Marine iguanas, blue-footed boobies, Galápagos sea lions, Galápagos giant tortoises and the only penguin species found north of the equator greet their visitors without hesitation. Having never learned to fear human beings, they approach as wide-eyed and curious as toddlers inspecting their surroundings.

To be a guest of the Galápagos is to find oneself surrounded by a herd of baby sea lions who flop out of the ocean to nuzzle beside you on the beach. Even more playful underwater, sea lions dart from the depths of the ocean to meet unsuspecting snorkelers with a nose-to-nose stare. All of this makes for excellent photography, assuming you’re quick to capture the moment.

Lindblad makes more than 40 trips to the Galápagos Island each year—several of which include Jay Dickman, a Pulitzer Prize–winning National Geographic photographer. On these photo-specific expeditions, Dickman accompanies guests on twice-daily hikes, offering guidance on shutter speed, exposure and angles. Of course, even the iPhone-wielding novice is made to feel welcome; Dickman generously dishes tricks to expertly shoot the landscape and wildlife on mobile.

Days end with lectures on Darwin and the history of the islands, photo workshops with Dickman and video screenings of work like Planet Earth II’s “Iguana vs. Snakes”—which was shot over the course of three months in the Galápagos. While guests sleep, the Endeavour II crosses from one island to the next, delivering a totally new adventure in the morning.

Each Galápagos Island is its own ecosystem; none of the species move between islands, and even their sands are different. In fact, guests are required to wash every grain from their clothing, shoes and gear before reboarding the ship to prevent cross-contamination of the soils. In this impressive, highly regulated effort to preserve one of the very last untouched regions of the Earth, not an element is allowed onto or out of the Galápagos. When they land at Galápagos Ecological Airport, the first zero-footprint airport in the world, guests’ bags are checked for plastic bottles, bags and straws—all of which are strictly prohibited.

Lindblad Expeditions was founded in 1958 by Lars-Eric Lindblad, an explorer who would eventually become known as “the father of eco-tourism” for his pioneering adventures that left little to no impact upon their destinations. Lindblad was the first to bring civilians to the Galápagos Islands, as well as locales like Antarctica, Arctic Svalbard, Easter Island, the Amazon, Papua New Guinea, the Seychelles, China and Bhutan—all of which guests can travel to through Lindblad Expeditions-National Geographic today.

The alliance travels year round to 22 destinations spanning all seven continents, with new expeditions added annually. In 2020, Lindblad-National Geographic will voyage for the first time from Norway to Alaska through the Northeast Passage, offering a 26-day adventure that costs between $34,750 and $68,780 per passenger. 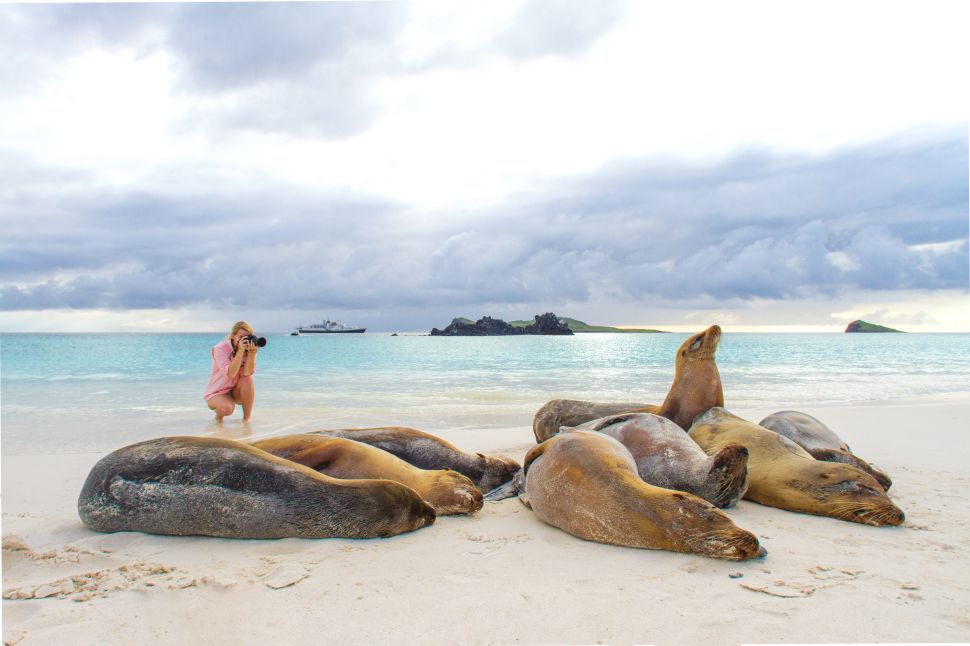