Glass, M. Night Shyamalan’s long-awaited sequel to 2000’s proto–comic book film Unbreakable and 2016’s more sinister Split, asks the same question as the trilogy’s first film: What if superheroes were real? It raises this question not in the bombastic and celebrated way the Marvel Cinematic Universe does, but in the fearful and apprehensive manner of someone confronted with forces beyond everyday comprehension. The trouble is, it never delivers a strong enough answer.

Tying together the narratives of two of his standout films, Shyamalan sets Glass three weeks after the events of Split, which, as we discovered in a surprising twist in its post-credits scene, inhabits the same universe as Unbreakable. Bruce Willis returns as the hero David Dunn, a man who possesses superhuman strength and near invincibility, as does Samuel L. Jackson’s villainous mastermind Elijah Price, a.k.a. Mr. Glass. Joining them from Split are James McAvoy, reprising his role as Kevin Wendell Crumb (and the multiple identities who reside within him), and Anya Taylor-Joy as Casey Cooke, the only captive to survive an encounter with the dark and powerful identity known as The Beast. When Glass begins, David is pursuing The Beast before Elijah finds himself in a position to orchestrate their conflict to suit his own agenda.

The first half of Glass is a rush—a rousing payoff for fans who’ve been obsessing over this saga for nearly two decades. It’s a treat to revisit David all these years later, touching to see him happily run a home security store with his son Joseph (an all-grown-up Spencer Treat Clark) during the day and then feed rabid internet speculation over his alter ego’s existence with his prowling nocturnal vigilantism. As he sets out to end the ongoing murder spree that plagued Split, David’s first encounter with The Beast is nothing short of thrilling. The pulsating showdown, with its simplified Terminator-like action, is refreshing in this era of shaky-cam Kung Fu–inspired combat. From there, Glass unspools a grounded psychological tale that deftly marries Unbreakable‘s approximation of real life with Split‘s more supernatural horror. The momentum of years of anticipation is palpable and rewarding.

Halfway through the film, you’re convinced Shyamalan has pulled off the impossible and cemented his official Hollywood comeback. Followers of his work were misguided to ever anoint him the next Spielberg, which many did after The Sixth Sense, but he’s also more talented than the punch line he became in the mid-aughts. At first, Glass seems to suggest that Shyamalan has finally settled into his role as a populist thrill-maker with a cheeky sense of humor (see: The Visit).

But sadly, Glass drags in its messy third act, which is bogged down by multiple tenuous connections and needless surprises that just feel tacked on for the hell of it. The overarching and opposing plans of certain main characters, the ultimate fates of others and the bare-bones plot are all used as cannon fodder in an attempt to shock and awe, when all they really do is bore and disappoint. It’s great that Glass strives for deeper meaning. However, by throwing so much at the audience so quickly, it unravels its own goal.

Even with an enjoyable first half, Glass never approaches a moment as powerful as this one from Unbreakable, in which David finally accepts who and what he is.

“Go to where people are,” Elijah tells him. “You won’t have to look very long. It’s all right to be afraid, David. Because this part won’t be like a comic book. Real life doesn’t fit into little boxes that were drawn for it.”

A bit overwrought, sure, but this scene is stylishly composed around an emotional core. Glass is well shot, creative and entertaining in spots, but we never get a comparable lasting image or feeling. After its climax, certain characters make a judgment call (which is naive at best and dangerous at worst) that will lead to massive ramifications should the franchise continue beyond this point. But based on the evidence presented to us in the series, it’s nearly impossible to understand the internal logic of this defining choice. That it arrives after a knotted flourish of failed attempts to explain and expand on the plot only makes it that much more frustrating.

Glass is meant to be a both an origin story and a culmination of sorts for Elijah, but what he represents as a creator of gods gets lost beneath its stack of comic-book allusions, which disrupt the story like a noisy smartphone going off in the middle of a quiet, crowded theater.

Of all the movies out there, the log line to 1978’s Superman continues to resonate decades on: “You’ll believe a man can fly.” It’s an optimistic sentiment that Shyamalan toned down but still embraced when he patiently convinced us that a man could not be broken. But walking away from Glass, it’s unclear what exactly we’re supposed to believe in. Is it that the bad guy was right and everyone is super? (Syndrome from The Incredibles might have something to say about that.)

What made Unbreakable groundbreaking was that it was a simple tale of a simple man with an amazing gift and how he comes to terms with it. It synthesized the idea of normal people grappling with abnormal otherworldliness, and it was packed with feeling without being tortured. It didn’t need multiple “gotcha!” reveals and flowery theatrics—tools that are used like jackhammers in Glass‘s homestretch, shattering something that could have been really special. 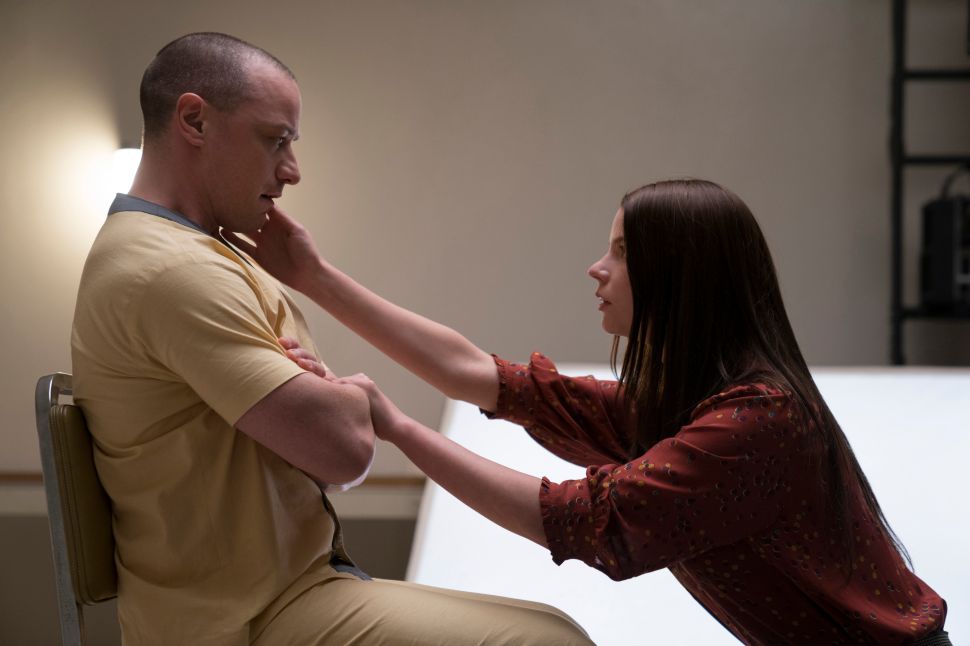