Yesterday, the ABC-affiliated Twitter account for The Bachelor tweeted out a teaser for the first episode of the show’s new season, and, given the clip’s content, the latest edition of the series looks to be a patently ridiculous addition to the Bachelor Cinematic Universe.

Traditionally, at the beginning of each cyclical dating merry-go-round, whoever has the honor of being the Bachelor or the Bachelorette stands in front of the beloved Bachelor Mansion to greet the incoming cast of romantic hopefuls. In the new clip, 2019 Bachelor Colton Underwood greets a strikingly beautiful woman in a red dress named Bri.

Is this lie going to take her down (under)? #TheBachelor pic.twitter.com/OrHrathRYJ

“So nice to meet you,” Bri coos after wrapping Colton in a perfunctory embrace. Her nails are painted a bright, unthreatening shade of baby pink. The enthusiastic look in Colton’s eyes could only be described as manic as he exclaims, “You’ve got a nice accent! Where are you from?”

Instead of answering his question, Bri points to her mouth and responds, “Um, the accent, it’s Australian. I was hoping that you’re kind of a sucker for accents. I didn’t know what you’d think about it.”

“I am,” Colton says, clearly charmed. “I’ll see you inside, all right?”

Smash cut to a talking-head interview with Bri (reality-television editors are the best!): “I’m not really Australian, but you have to do what you can to stand out.” WHAAAAAAAAT?

(For the record, Observer editor Juliet Helmke, who was raised in Australia, found Bri’s accent unconvincing from the jump. “It’s stilted, when the entire sound of an Australian accent relies on you being somewhat lazy with enunciation,” she said. “Also, it veers slightly into Eastern European territory.”)

So, the big question here: Who on earth is this woman? Who in their right mind lies about having an accent straight to the face of someone they hope to be romantically involved with? Professional model Brianna Barnes, 24, of Los Angeles, California, that’s who.

Turns out a few different women named Brianna Barnes are trying to make it on screen. The Bachelor Bri, however, is a bit more of an enigma.

This Brianna, who looks like a high-fashion editorial version of Jennifer Lawrence (no disrespect to J-Law), is a working model represented by the Newmark Agency. Her measurements are listed on the Newmark website, but they will not be repeated at length here. The gist: She’s 5-foot-8, like Kate Moss.

Her Instagram feed is one of those perfectly curated accounts that appear to be designed to prompt you to glance down at your own puffy stomach and sigh resignedly: Nearly every image shows Bri looking stunning in a shoot, often partially nude and drenched in sunlight.

The quote posted at the top of her Instagram account reads: “Beauty is not in the face, beauty is in the light of the heart 🌟✨🍯🙏🏼.” This is, of course, the type of thing only seriously beautiful people say regularly.

But what of Bri’s inner life? Unfortunately, we’ll only be afforded greater access to her mind once the season takes off in earnest (it premieres January 7 at 8 p.m. EST), but the trail left by her social media does provide some clues. Her feed is filled with references to living, laughing and loving and features affectionate pictures of her younger brother. We also know for certain that she likes Miley Cyrus and had a childhood affinity for baseball bats.

Ultimately, though, Bri’s fake accent poses more questions than Instagram could ever answer. There’s a lot more to this girl than meets the eye, people.

The competitive nature of the Bachelor process, in which scores of men and women compete for the honor of being awarded a relative stranger’s hand in marriage, has always driven contestants to attempt bizarre stunts in order to stand out. After all, first impressions are enormously important when it comes to dating.

You might recall Zak arriving shirtless on Bachelorette Desiree’s season, or Tia presenting Arie with a miniature red plastic wiener upon meeting him for the first time. And one dude even stepped out of his limo wearing a chicken suit last year.

But Bri? She takes the cake. Her technique makes for the most effective Bachelor-associated attention-getting strategy of all time. It’s shockingly brazen, hopelessly desperate and totally brilliant. 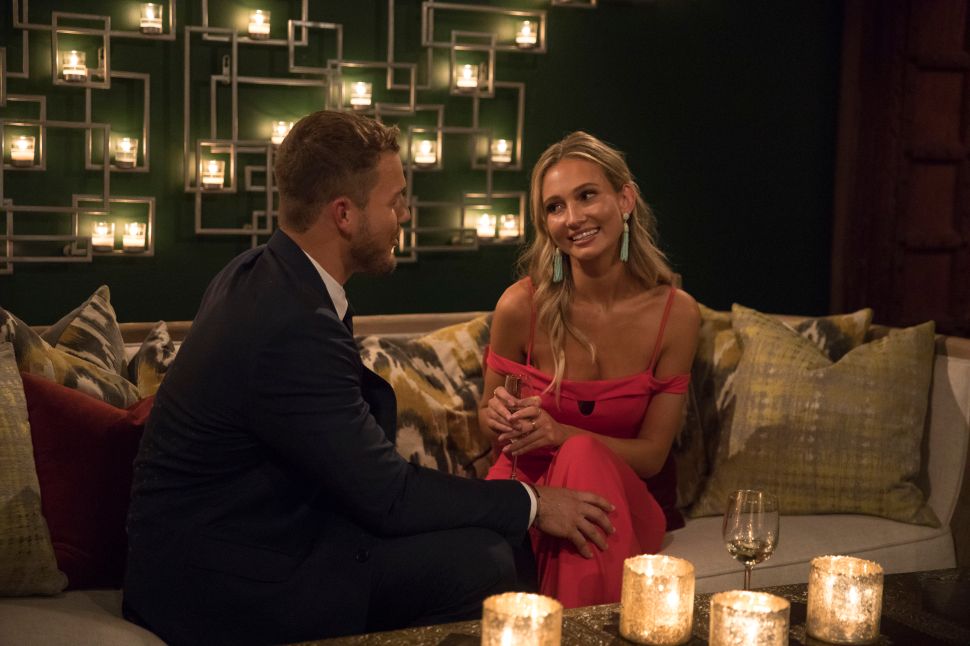