Over the past two years, Saudi Arabia’s 33-year-old Crown Prince Mohammed bin Salman, colloquially known as “MBS,” has dominated news headlines in the West so often it’s easy to forget that he’s only been next-in-line to the throne for just 18 months.

Nicknamed “Mr. Everything,” MBS is now the oil kingdom’s de-facto ruler. He was the central figure behind many earth-shattering events in 2018, from Saudi’s economic reform to the controversial intrusion of Yemen to the abhorrent killing of Washington Post journalist Jamal Khashoggi in October.

Being appointed crown prince at such a young age was unusual in Saudi Arabia. According to the royal family’s succession rule, when the king dies or abdicates, the throne goes to the king’s oldest living brother before any of the king’s other brothers or members of the next generation are considered. MBS’s father, King Salman, had dozens of living brothers when he took power in 2015. Let alone the many eligible princes from MBS’s own generation. So, what happened?

To understand MBS’ meteoric rise, it’s important to learn a little bit about the history of Saudi’s immensely complex royal family tree, the rules he had to abide by—or break—along the way and, most important, the people who paved the way for him long before he emerged on to the political stage.

Here is a (simplified) timeline of events that explain everything you need to know about the Saudi royal family and how MBS seized power. 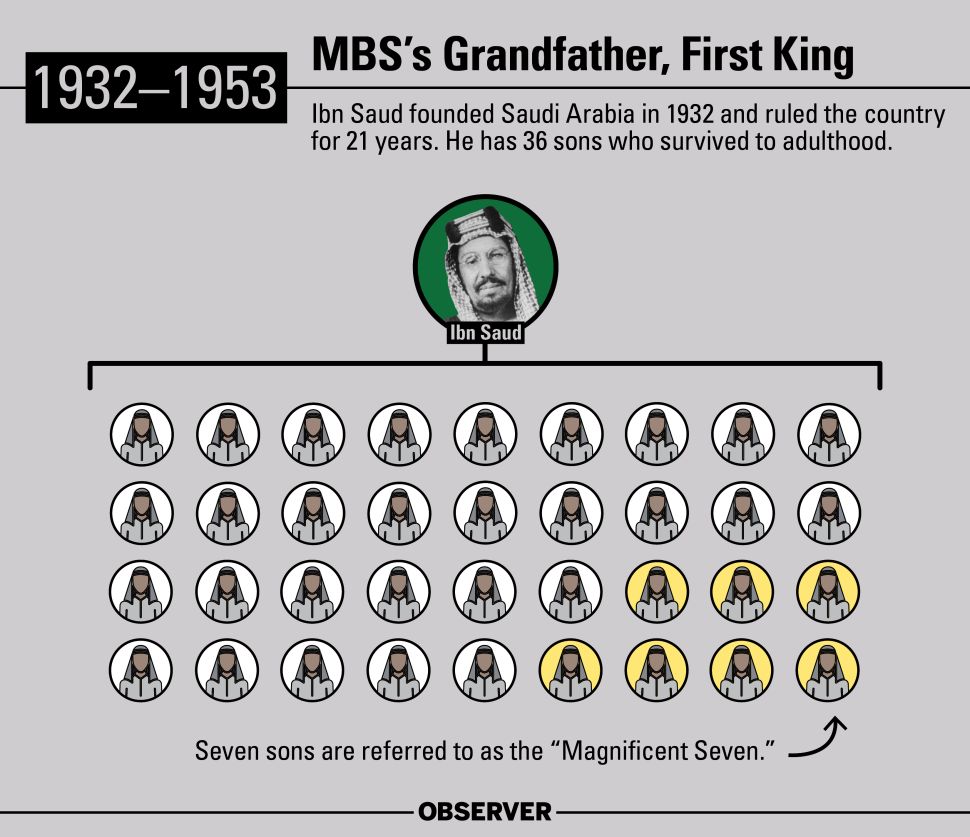 The Kingdom of Saudi Arabia as we know it today was founded by Ibn Saud, also known as King Abdulaziz, in 1932. (Yes, you guessed right; the country was named after him.) Ibn Saud founded the country’s absolute monarchy and established a strict succession rule for his offspring that favored brothers over sons (although he passed the throne on to one of his sons).

Over his 21-year reign, he reportedly had 45 sons with 10 wives. Thirty-six sons survived to adulthood, including all of the subsequent kings of Saudi Arabia.

Just like in any normal big family, some of Ibn Saud’s children were more special than others. Among his army of sons, seven stood out early on because they shared the same mother, Hussa Sudairi, who was the love of Ibn Saud’s life. (He married her twice and had more sons with her than any of his other wives.)

Inside the Saudi royal family, the seven sons of Sudairi became known as the “Sudairi seven” or the “magnificent seven.” MBS’s father, King Salman, is one of them. 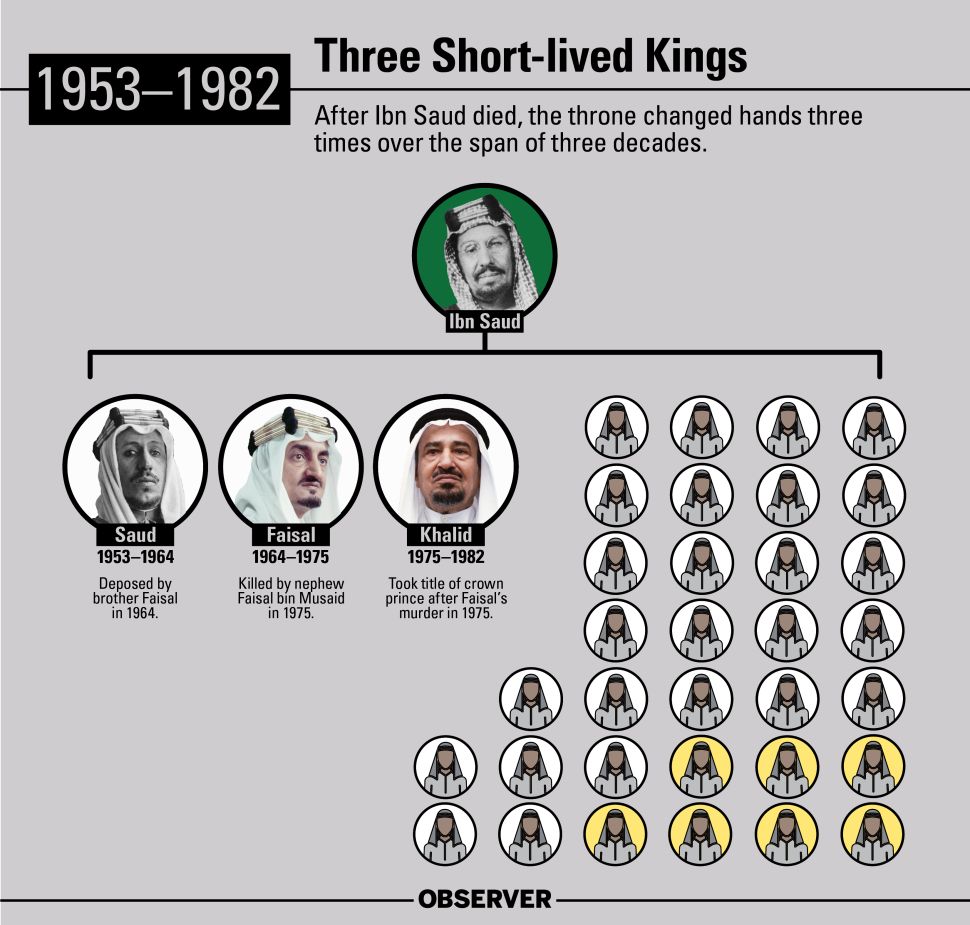 After Ibn Saud died in 1953, his oldest living son, Saud bin Abdulaziz Al Saud (King Saud), inherited the throne smoothly according to the succession rule. But King Saud managed to stay in power for just 11 years, before his younger brother, Crown Prince Faisal, forced him into abdication in 1964 through a military coup.

Faisal then ruled the country for another decade before being murdered by a half-brother’s son, Faisal bin Musaid, in 1975.

The assassination was believed to be an act to avenge the untimely death of Faisal bin Musaid’s brother, Prince Khalid bin Musaid, who was a vocal opponent of some of King Faisal’s policies during the 1960s.

King Faisal was replaced by his lawful successor, then 62-year-old Khalid. Khalid stayed in power for just seven years before dying of a heart attack in 1982. 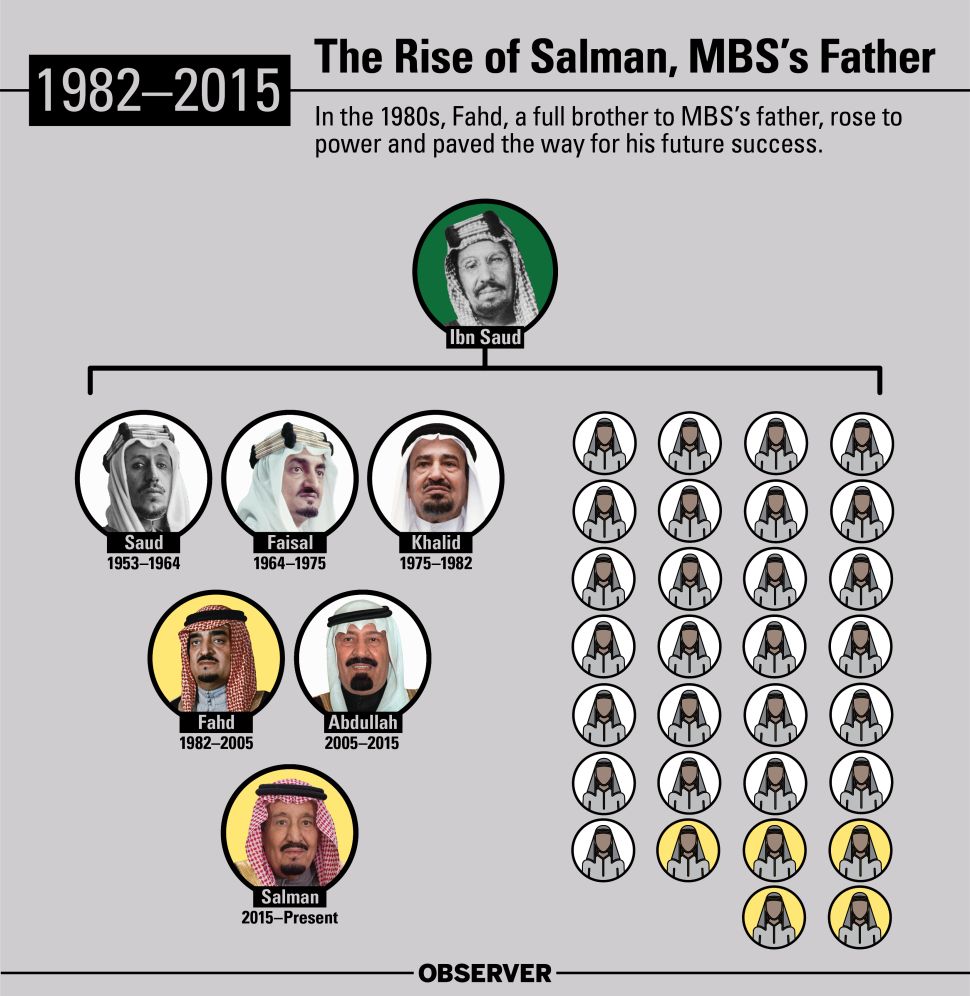 In the 1980s, the “magnificent seven” brothers officially stepped on to the political stage.

After King Khalid passed away in 1982, the throne was passed on to his half-brother, Fahd, the lawful crown prince and the oldest member of the “magnificent seven.”

Fahd stayed in power for 23 years. During his reign, the race for the crown prince title divided his remaining brothers into two camps: his six full brothers and all the other living sons of Ibn Saud.

Naturally, King Fahd wanted one of his full brothers to inherit the throne to consolidate power for his mother’s blood line. But the problem was, his lawful next-in-line, Prince Abdullah, was not a “Sudairi” brother.

King Fahd eventually agreed to bequeath the throne to Abdullah, but only on the condition that Abdullah appoint Fahd’s full brother, Salman (MBS’s father), as crown prince. He was able to legally do so thanks to a major succession rule change he institutionalized in 1992, which allowed him to appoint or dismiss his heir apparent based on suitability rather than seniority. The rule change also made the grandsons of Ibn Saud eligible for the throne for the first time.

Abdullah became the king in 2005 after Fahd died of natural causes at the age of 84. Abdullah went on to rule the country for 10 years. After he died in 2015, Salman took over the throne, just as his elder brother Fahd had hoped. 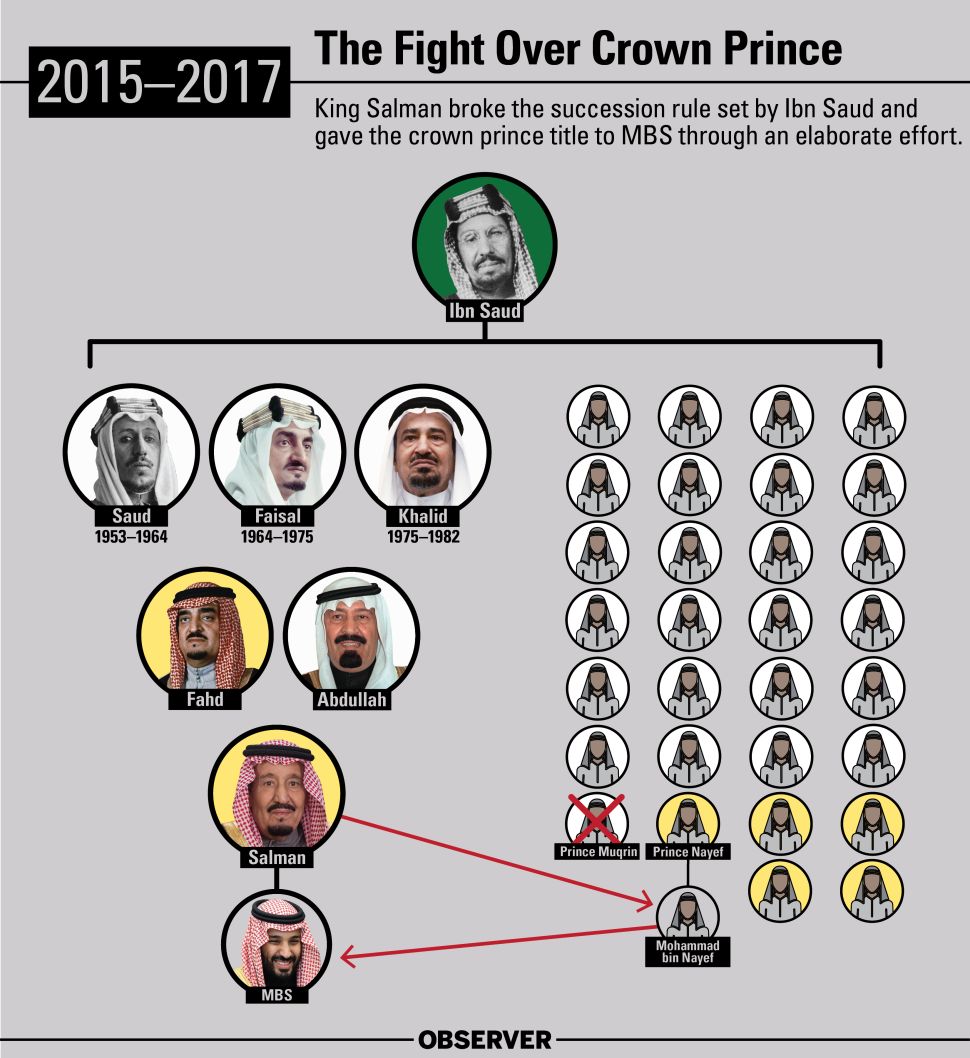 Like his brother Fahd, King Salman’s goal was to keep his family’s blood line on the throne for as long as possible. When he took power in 2015, only three of his “Sudairi” brothers were still alive. But they were either too old (two passed away within the first two years of Salman’s reign) or had been sidelined in earlier power struggles.

So, for the first time, the fight for the crown prince fell upon the grandsons of Ibn Saud.

Just three months into his reign, King Salman dismissed his successor apparent, Crown Prince Muqrin, who was already 70 at the time, and gave the crown prince title to his 56-year-old nephew, Mohammad bin Nayef. The move made perfect sense, because Mohammad bin Nayef’s father, Prince Nayef, was a “magnificent seven” prince, and he was young enough to secure the power for another couple of decades.

However, it turned out that Nayef was not good enough. What King Salman really wanted was for his own son, MBS, to carry on the throne.

In June 2017, Nayef gave up his claim to the throne to his cousin, MBS, who had just turned 31. At the time, The New York Times reported that MBS and his father had plotted the ouster for months and that Nayef had been held against his will at a palace before the public transition. In response, Saudi officials told Reuters that the Times story was a “complete fantasy worthy of Hollywood.” 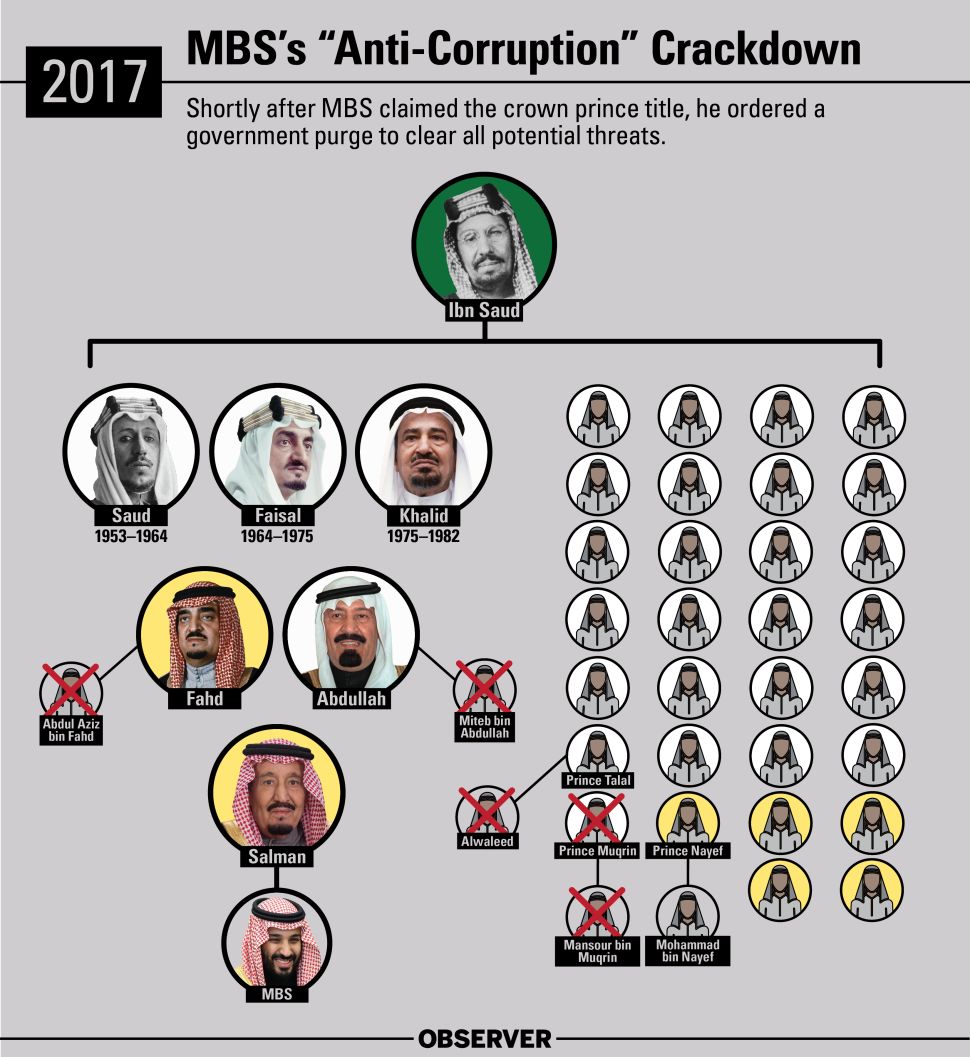 Now MBS was finally the righteous successor to the Saudi throne, but he still had a few dangerous enemies, both from his own generation and his father’s living brothers.

In November 2017, five months after being appointed crown prince, MBS ordered a sweeping anti-corruption crackdown, which led to the detention and death of several prominent royal members, including Prince Alwaleed, nicknamed “the Warren Buffett of Arabia,” who holds over $20 billion worth of assets across the globe (including many U.S. companies), despite having no government duties in Saudi Arabia.

During the government purge, rumor had it that Prince Abdul Aziz bin Fahd, son of the late King Fahd, was killed by a death squad while resisting arrest.

Also during the purge, MBS ordered the arrest of another son of a former king. On November 4, 2017, Prince Mutaib bin Abdullah, son of the late King Abdullah, was arrested and stripped of all government duties.

A day later, Prince Mansour bin Muqrin, son of former Crown Prince Muqrin (King Salman’s lawful successor), was killed in a helicopter crash near the border between Saudi Arabia and Yemen. News reports from the Middle East suggested that the crash was not an accident, but a plotted assassination ordered by MBS himself.

By the end of the November-December crackdown, MBS had cleared every potential threat inside the royal family. His enemies from now on, however, will likely be coming from overseas and  will be a lot harder to fight off than his Keffiyeh-wearing uncles and cousins. Suspicion over his involvement in the Khashoggi assassination has already caused a backlash from the West against his ambitious economic reform: the IPO of Saudi Arabia’s state-owned oil company, Saudi Aramco, has been put on hold; American tech giants are distancing themselves from Saudi money; and MBS is almost running out of tricks to lure foreign investments into the kingdom and repair his reputation as a benign reformer. 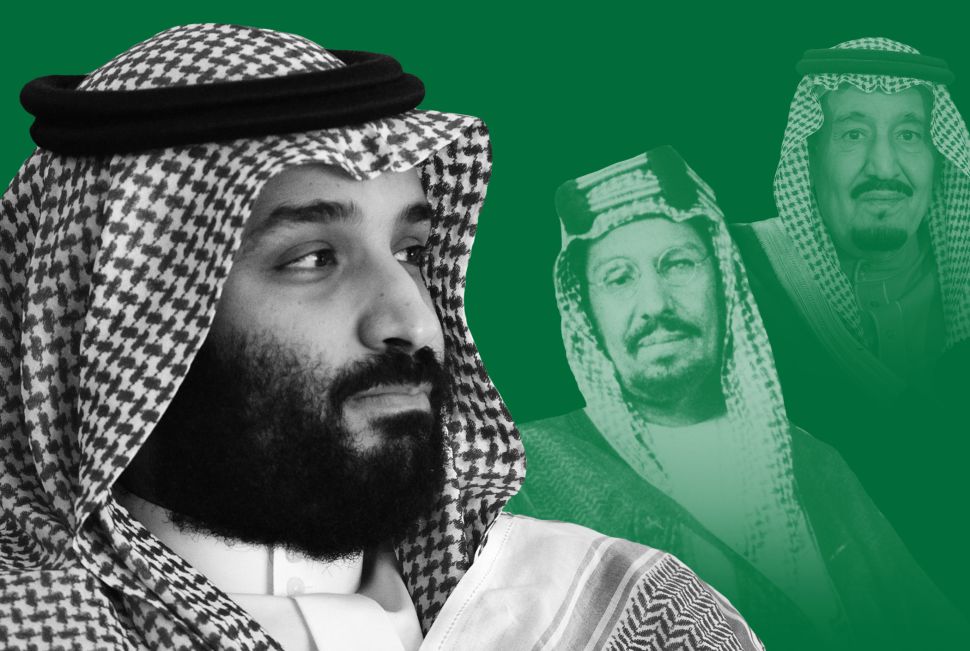