There’s a well known Twitter joke by the popular account @InternetHippo. “Just got back from the centrist rally,” it goes. “Amazing turnout. Thousands of people holding hands and chanting ‘Better things aren’t possible.'”

Last night in New York, Howard Schultz, former Starbucks CEO, held a centrist rally of his own. The location, the Barnes and Noble in Union Square, was an appropriate one, because it’s where people downtown tend to go when they need to take a big shit.

Like much of the rest of Schultz’ couple of days since he hinted at his intentions to run for president, including an interview on 60 Minutes, the event, moderated by CNBC’s Andrew Ross Sorkin, author of Too Big to Fail, and co-creator of Showtime’s Billions, a show about how terrible and boring billionaires are, got off to an ignominious start.

. @HowardSchultz faced protests during a book event Monday night. Take a look at this moment: pic.twitter.com/4bjx6Smxan

“Don’t help elect Trump, you egotistical billionaire asshole,” a heckler shouted from the crowd. “Go back to getting ratioed on Twitter. Go back to Davos with the other billionaire elite, who think they know how to run the world.”

Schultz has attempted to carve out for himself the wafer-thin slice of the electorate left that thinks Donald Trump is boorish and rude but also doesn’t want to particularly improve Americans’ lives all that much, saying that extremes on both sides have gone too far and that it’s time for a return to sensible policies.

“What the Democrats are proposing is something that is as false as the wall and that is free health care for all, which the country cannot afford,” he said on Sunday.

Schultz, a self-described lifelong Democrat was asked why he wouldn’t run for the party’s nomination, particularly when there’s the possibility he might play a spoiler roll in reelecting Trump.

“I feel if I ran as a Democrat, I would have to be disingenuous and say things that I don’t believe because the party has shifted so far to the left,” he told The New York Times. “When I hear people espousing free government-paid college, free government-paid health care and a free government job for everyone — on top of a $21 trillion debt — the question is, how are we paying for all this and not bankrupting the country?”

Schutlz’ net worth, by the way, is estimated to be over $3 billion.

Perhaps unsurprisingly, Schultz’ campaign roll out was not particularly well received on Twitter.

gotta hand it to howard schultz, rarely have I seen someone so rapidly ascendant in the world of “people everyone absolutely hates”. 24 hours ago nobody knew who this dickhead was and now he can’t walk down the street without people trying to spit into his open mouth. impressive

I can't recall an admired CEO ruining his reputation faster than Schultz has without doing something illegal https://t.co/aLo11mft1C

Twitter is not necessarily indicative of real life of course, so it’s natural to ask: Who, exactly, does Schultz think his base is? Who could possibly be in favor, at a time like this, for a vaguely socially liberal austerity platform? You might think that there’s no one out there left like that but you would, of course, be forgetting a particularly prominent class of people: the elite media class. Bootlickers assemble!

Among the first to call for “fiscal responsibility” of the kind Schultz is espousing was NBC media reporter Dylan Byers, a man whose taste for the sweet tang of a leather sole is second to none.

“Fiscal responsibility is a crucial issue and deserves to be front and center in the 2020 presidential race. Because, like Bernie Sanders in 2016, Democratic hopefuls are already starting to make big promises without providing specific details about how they intend to pay for them—or, for that matter, get them through Congress,” Byers wrote on Monday.

…and they said Howard Schultz didn’t have a natural constituency pic.twitter.com/NTkF1vw6SE

“Schultz has an incredible rags-to-riches story, having grown up poor in a housing project in Brooklyn. Today, he is a billionaire and one of America’s most respected business leaders,” Horowitz, who was on hand at the Barnes and Noble event, wrote this week in a fawning bit of hagiography for the big and strong and smart coffee man.

And then there’s this pair of losers.

Ah, @SalenaZito agrees with me that @HowardSchultz has a real chance, a real path.

On his radio program on Monday, Hugh Hewitt, the lipless head with takes such as “Trump overthrowing Maduro will unite America” to name one recent fit of genius, spoke to serial fabulist Salena Zito about Schultz’ appeal.

Finally, at long last, a rich guy who doesn’t seem like he’s walking around with a hatchet buried in his skull. Why aren’t we all more thankful?

It’s only a matter of time one has to imagine before David Frum, Bill Kristol, Bret Stephens and the rest of the #resistance Republicans are on board… oh wait… lol, I just looked it up to double check and of course this happened.

A defense of Howard Schultz https://t.co/AcmyiTRqVI

But there’s one reliable place a rich guy like Schultz will never get attacked from and that’s at boot level. There will always be too many lanyard-brained pundits protecting him from their sniveling perch. At the very least, you have to imagine Schultz has some really fancy shoes. They probably taste a lot better than his coffee. 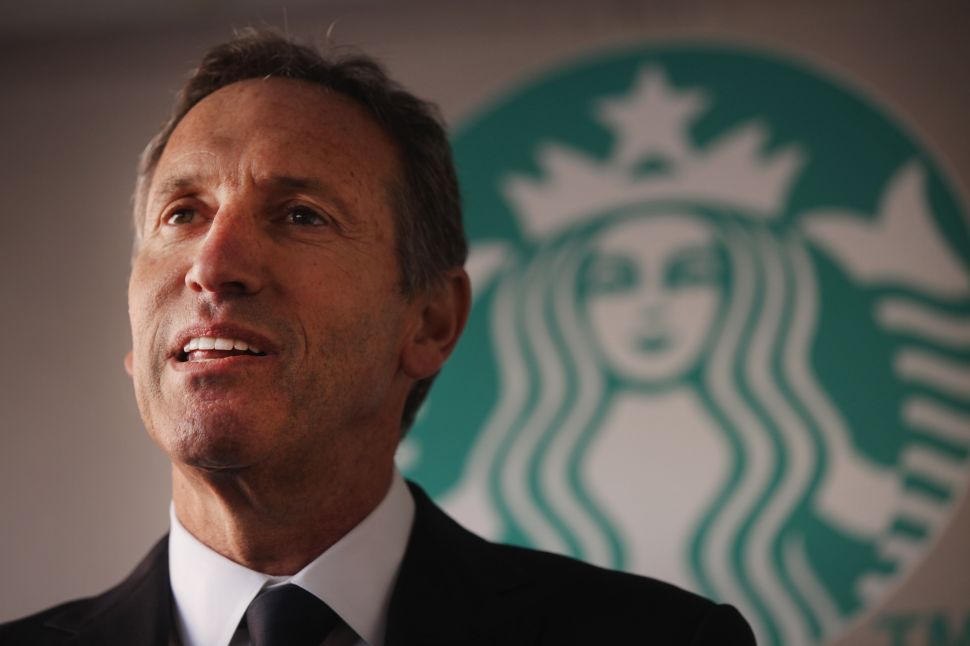