Ren Zhengfei, the semi-retired founder of Chinese telecom giant Huawei, decided to speak up for his company amid a bitter U.S.-China trade war. On Tuesday, the 74-year-old entrepreneur held a rare press conference for foreign reporters to address Washington’s burning concerns over his company’s potential threat to U.S. national security and the unexpected arrest of his daughter, Huawei CFO Meng Wanzhou, by U.S and Canada authorities last month.

Ren is a high-ranking member of China’s Communist Party and a former soldier for the country’s People’s Liberation Army. Despite his close ties with Beijing, at Tuesday’s briefing, he assured foreign media that Huawei would never share user data, including that from international markets, with the Chinese government.

“I love my country, and I support the Communist Party. But I will not do anything to harm the world,” he said. “I don’t see a close connection between my personal political beliefs and the businesses of Huawei.”

Well, that might be partly true—whether a company eventually hands over user data to the Chinese government is not so much connected to the founder’s political stance, but has more to do with where it does business. Even Apple, a wholly American company, has surrendered some of its data to Beijing in exchange for a physical presence in its territory.

Huawei is China’s largest telecom and consumer electronics company. Until the recent downfall of Meng and the government-ordered blockade of its service in the U.S. and several European countries, Huawei had a wild ambition to conquer the U.S. smartphone market and to dominate the race among global carriers of the 5G mobile network, the next-generation standard for wireless communications.

Observers of international politics in general view Washington’s series of punitive measures against Huawei as a tactic to get an upper hand in the ongoing trade war with China. But Ren seemingly wanted to convince President Trump that targeting his company was completely unnecessary.

“Huawei is only a sesame seed in the trade conflict between China and the U.S.,” he said. “Trump is a great president. He dares to massively cut tax, which will benefit the business. But you have to treat [foreign] companies and countries well so that they will be willing to invest in the U.S. and the government can collect enough tax.”

He even expressed a willingness to step back from the U.S. market to keep Huawei afloat.

“Huawei is not a public company, so we don’t need a beautiful earnings report [to impress shareholders],” he said. “If some countries don’t want Huawei to be in some markets, we can scale down a bit. As long as we can survive and feed our employees, there’s a future for us.”

Since last year, the U.S. government has asked several allies, including Australia, Canada and South Korea, to ban Huawei hardware and services in their countries. Last November, the effort expanded to Germany, Italy and Japan, The Wall Street Journal reported.

Then, in December, Ren’s daughter and Huawei’s chief financial officer, Meng Wanzhou, was arrested in Canada at the request of U.S. authorities. She was accused of helping Huawei get around U.S. sanctions on Iran through fraudulent shell companies. She is currently restricted to her home in Canada on bail facing extradition to the U.S. for further investigations.

President Donald Trump has yet to confirm a date for her extradition.

“Ren Zhengfei doesn’t give many interviews, but his decision to speak publicly seems like a smart move,” Brock Silvers, a managing director for the Shanghai-based private equity firm Kaiyuan Capital, told the South China Morning Post on Tuesday. “The threat to Huawei’s European business is real and it is understandably responding to it. Ren’s public comments today show how seriously he views the situation.”

Tuesday’s press briefing was Ren’s first appearance before foreign media since 2015 and the third press conference he’d ever held over his 30 years at Huawei. 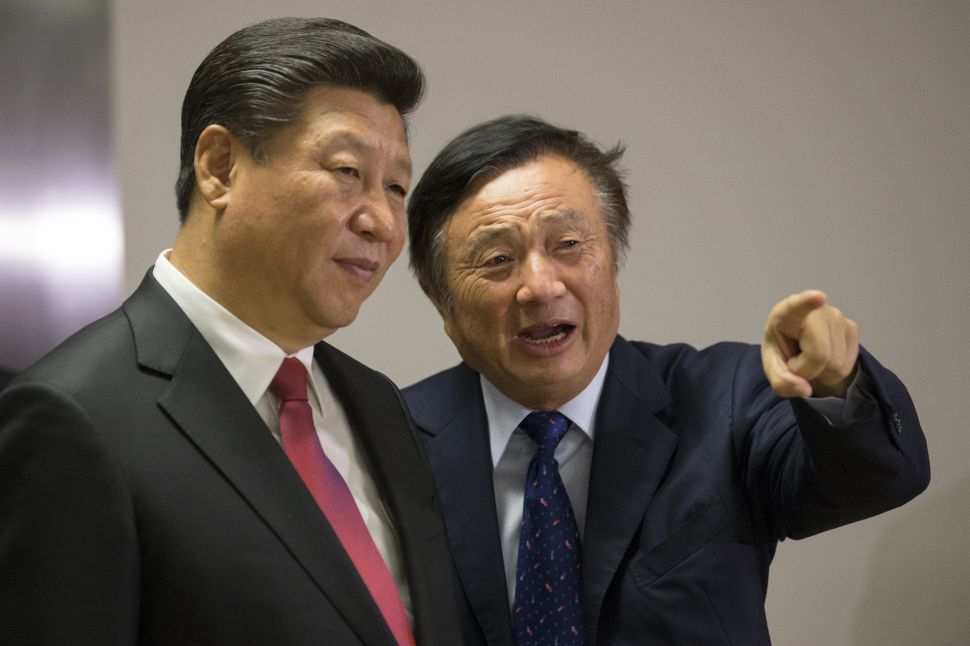