Princess Charlotte would be very jealous if she knew her mother didn’t bring her to an engagement at the Royal Opera House today. Kate Middleton took Charlotte to the Royal Ballet’s special performance of The Nutcracker during the holiday seasons last year, but sadly the little Cambridge wasn’t invited to tag along with Mum today.

The Royal Opera House creates and conserves thousands of costumes for opera and ballet performances each season, and the Duchess of Cambridge’s visit to its costume department gave her a chance to learn about the textiles used to craft the costumes as well as the design creation involved.

She chatted with the Royal Opera House’s head of costume about the ballet ensembles, which are designed so that the dancers are able to move around without constraints, and also about dyeing techniques like hand painting and staining. Middleton also spoke with Royal Ballet principal dancers, who discussed some of the difficulties of dancing in the costumes.

Of course, the Duchess of Cambridge chose the perfect outfit for the occasion, and it just happened to be hanging in her closet already. She donned a purple Oscar de la Renta peplum jacket and a matching flared, pleated skirt; she first wore the $3,480 look in February 2017 for an appearance with Prince William at the United Kingdom Guild of Health Writers Conference. No, the silhouette isn’t exactly Swan Lake, but a true tutu would have been a bit much.

Pointe shoes were a no-go, but Middleton’s new $765 Rupert Sanderson four-inch black patent heels are a master class in how to deal with uncomfortable footwear. Her more practical accessory was a Queen Elizabeth–approved $725 black crocodile-embossed Aspinal of London Midi bag.

This is just the beginning of Middleton’s fashion journey—and we don’t just mean her own eagerly chronicled sartorial choices. Middleton is the royal patron of the Victoria & Albert Museum, which holds a national collection of textiles, and she will be visiting a number of locations over the next few months to further develop her knowledge of fabrics, design and craftsmanship, and also meeting with industry experts.

But the Duchess of Cambridge isn’t the only royal catching a performance today. Prince Harry and Meghan Markle are heading to the premiere of Cirque de Soleil’s Totem show tonight at Royal Albert Hall. 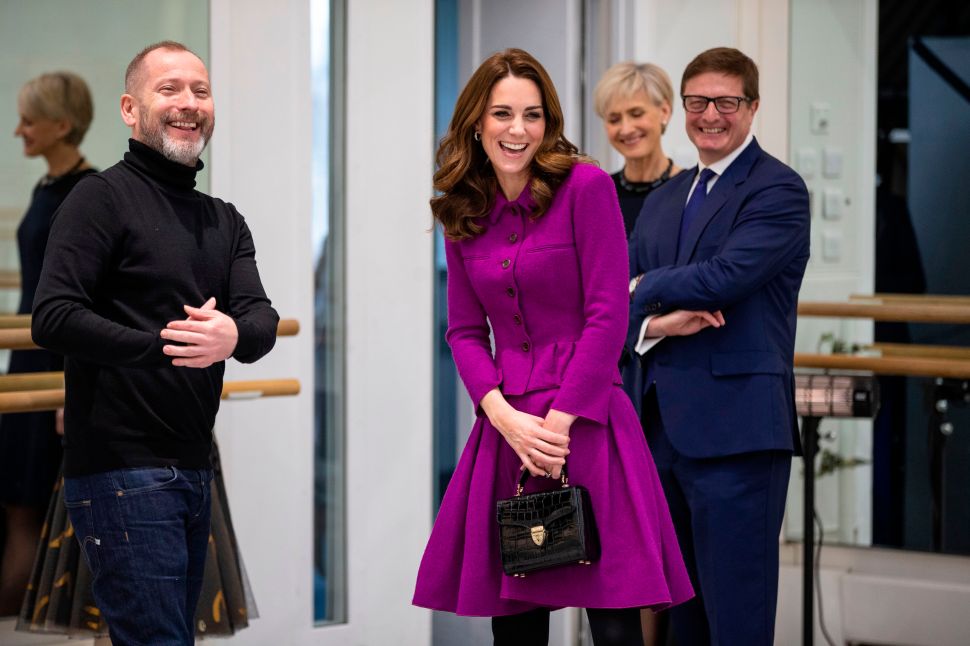