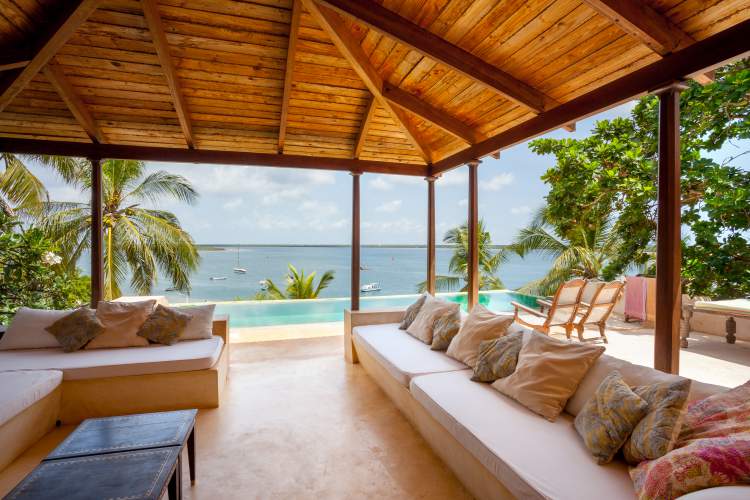 First made popular by Mick Jagger in the 1970s, Lamu, the less famous neighbor to Zanzibar, has been opening its arms to a stylish, eclectic crowd of regulars for decades. The oldest Swahili coastal settlement, it’s a place where European royalty and aristocrats frequently flock for the holidays. Princess Beatrice chose the remote location to ring in the new year with her new beau, Edoardo Mapelli Mozzi (whose family owns a home there), while Madonna, Sting and Kate Moss have all enjoyed its under-the-radar perks.

Designers and artists such as Anish Kapoor and Marina Abramovic have ventured to Lamu seeking inspiration, escape or perhaps just a more relaxed pace—a life best enjoyed pole pole, the Swahili phrase for take it slowly. With its rich history, pristine beaches and eclectic mix of characters, Lamu reigns as Africa’s ultimate refuge and best-kept secret. Here’s how to properly explore it. 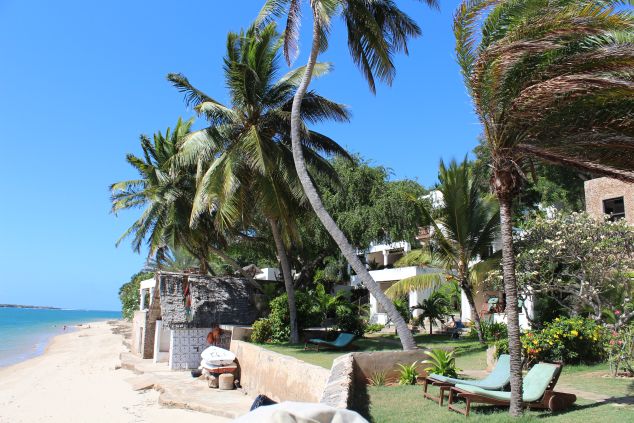 The beachfront of Lamu. Carolina Ramirez

If you’re a seafarer, consider this paradise.

The island of Lamu has two neighboring villages. There’s the UNESCO world heritage site of Lamu Town, which is buzzing with markets, and the more serene and laid-back Shela, where you will find the high-end but never highbrow hotels, shops and restaurants. Traditional dhows and donkeys remain the main form of transportation on the island, but a boat taxi (colloquially known as a “Lamu Uber”) can get you anywhere you want to go. Any of the hotels or restaurants can secure you one, or you can simply walk over to the jetty. Keep your eyes peeled for boat names like I’ll Be Back, I’ll Be back II and our personal favorite, Beyoncé. 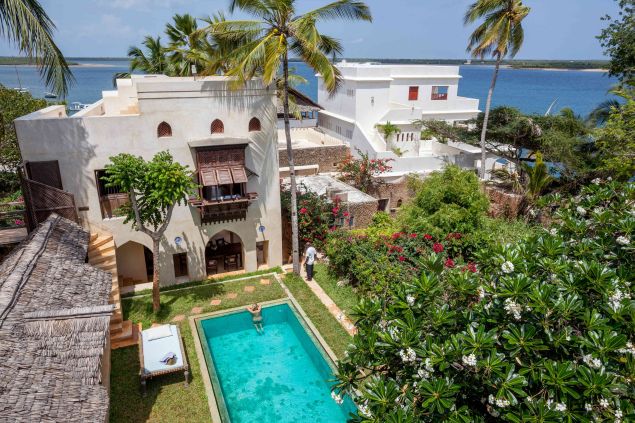 You can take your pick of Swahili-style suites.

Originally a family holiday home, The Moon Houses have been operating as a boutique collection of guest cottages since 2009. The buildings, which have been constructed in the Swahili style and are furnished with antiques, sit on the land owned by famous flying doctor Anne Spoerry, also known as Mama Daktari, who visited remote villages in Lamu for vaccination campaigns. You can even stay in the suite where Spoerry resided through the late ’60s, enjoying the furniture she personally selected. 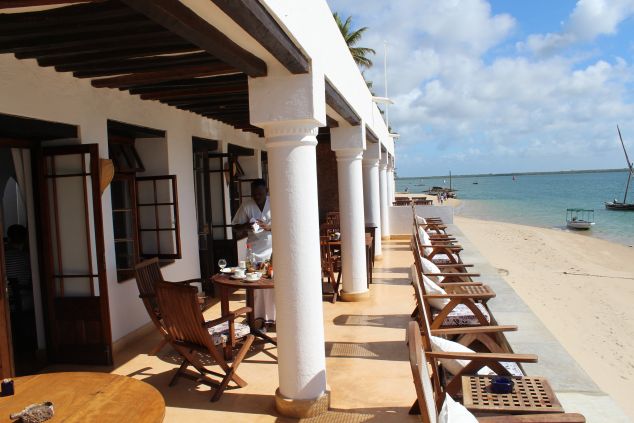 The veranda at Peponi. Peponi

Peponi Hotel has been Shela’s main hotel and watering hole since around the same time. It was established in 1967 and soon made famous by stories of Mick Jagger and Jerry Hall lounging on its veranda and Yehudi Menuhin serenading dinner guests with his violin. With a name that means “paradise” in Swahili, the hotel has become known for its signature cocktail, the Old Pal—a vodka and grapefruit concoction that you can enjoy with a candlelit dinner overlooking the bay.

The food in Lamu is a bright mix of Arabic, Swahili, Indian and African cuisines with fresh seafood as the main attraction. Take a five-minute Lamu Uber across the bay to the very Instagrammable Majlis Hotel for lunch and then spend the rest of the afternoon by its pool with an ice-cold Tusker, the local beer, in hand. 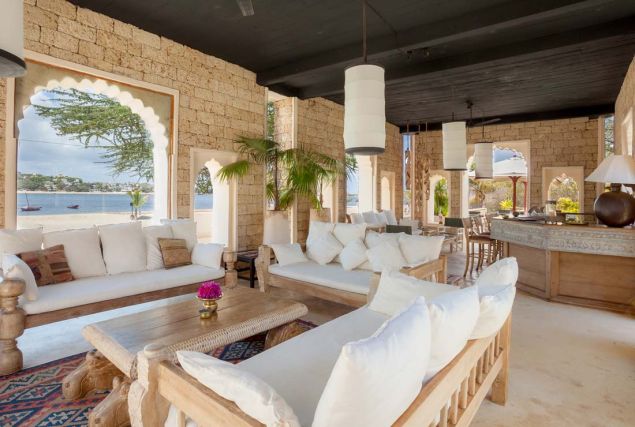 The bar and lounge at The Majlis. The Majilis

You’ll be able to balance exploration with indulgence.

We suggest taking a day to discover Lamu’s Old Town, where time feels like it may have stopped with Indian, Persian, Omani and Portuguese influences visible throughout the coral stone houses and impressive teak and mahogany doors. Because Lamu is predominantly Muslim, avoid a cultural faux pas and be sure to dress appropriately.

Stop by the shop Gallery Baraka, where you can easily get lost among the collection of unique pieces from across Africa, Cameroon, Mali, the Ivory Coast and South Sudan, including tribal masks, jewelry and hand-carved furniture. Take refuge from the hustle and bustle of the Old Town in Whispers, the connecting coffee shop in the back, where you can enjoy a chilled latte and snacks. 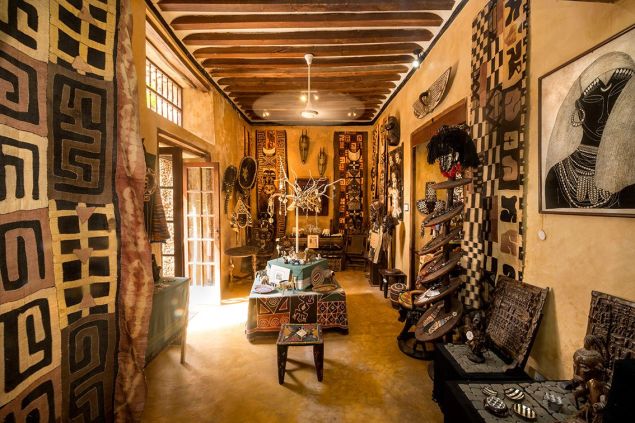 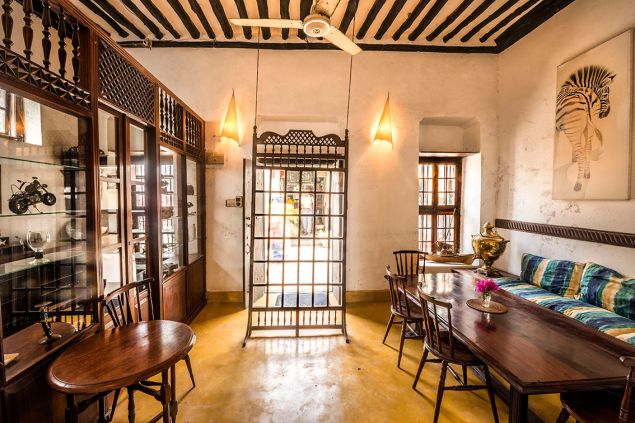 Back in Shela, the best shop on the island is a clothing store called Aman, whose owner, Sandy Bornman, travels the world to find unique cotton patterns and fine light silks, which are crafted into handmade looks by its talented in-house tailor, Joseph.

Their newly opened Aman Home next door carries an equally impressive collection of home accessories like carpets, linens and other homewares from across Africa. 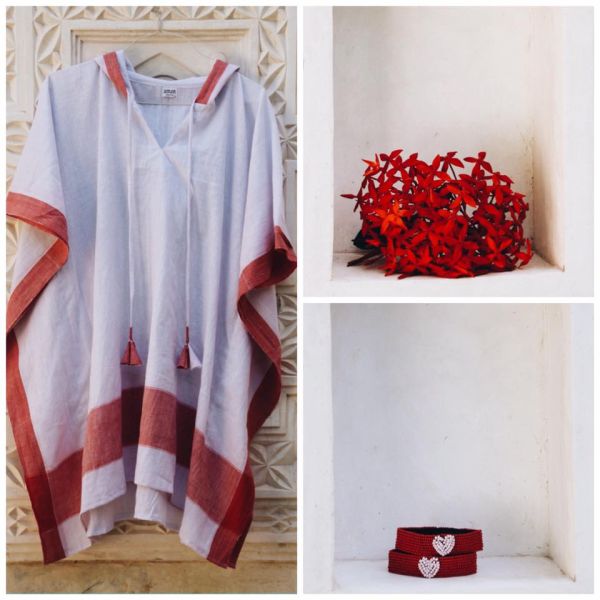 A sample of the wares available in Aman. Aman

Located up the street from Peponi Hotel is Aalyshah Design, where you can snatch up a kikoi—a versatile cotton fabric that can be used as a cover-up, scarf, beach towel or even a baby sling.

And get even farther off the grid.

A sunset cruise on one of the island’s famous Mozambican dhows is the perfect way to feel like you’ve truly escaped from it all. Sail through the secluded mangrove forests and witness the sun dipping over the Indian Ocean.

Those looking for even more privacy should take a few days to stay at the beautifully rustic eco-lodge Mike’s Camp, located on the isolated beach of Kiwayu, a favorite of British artist Tracey Emin. It’s reachable either by plane or by a bumpy speedboat ride about 40 miles through the mangrove channels along the Kenyan mainland. Its seven comfortable and spacious bandas, or thatched bungalows, overlook a pristine beach that’s part of a marine reserve, with a game reserve next door offering plenty of opportunities for wildlife sightings.