“It’s the first real day of the fest,” said John Cooper, Director of the Sundance Film Festival, while introducing the film. “And we’re getting real. Real early.” He also stressed that the film contains graphic descriptions of sexual acts, and that health care professionals from Utah were on hand in case people needed help during the show. Offstage, an HBO exec asked the film’s publicist which press outlets made it to the screening. “All of them,” he said.

Leaving Neverland was a surprise late addition to the lineup, announced only two weeks before the festival kicked off. And during that time, a slew of MJ fans threatened sponsors to pull out of the event. They even sent thousands of emails to the film’s director, Dan Reed, harassing him for having the audacity to challenge their infallible ’80s idol.

Expecting widespread protests, local police were out in full force with a dozen or so uniformed men and women standing outside the venue as well as inside the lobby and in the aisles of the theaters seats. Dogs sniffed ticket-holders as security guards checked bags. The screening started 30 minutes late, although concerns about protesters turned out to be an overstatement. Before the show started, only two had showed up. By intermission, that number had grown to 20, as they carried signs that read “Seek Truth” and “Michael = Innocent.” But their numbers dwindled long before the film had ended. Jackson’s family have since released a statement condemning the movie.

What’s most staggering is that Michael Jackson really isn’t even the focus of Leaving Neverland. Eschewing the standard tabloid trappings of such a radioactive subject, Reed instead pivots away from the King of Pop and gives the two alleged victims, budding actor James Safechuck and precocious dancer Wade Robson, wide berth to explain their own experiences—both very unique to them, and also both uncannily similar in terms of the patterns of a sexual predator and their lasting, corrosive psychological and emotional effects. Safechuck was 10 when he says they first had sex. Robson was seven.

Those experiences implicate their immediate families, especially the unwittingly complicit mothers who eagerly accompanied their sons on world tours with Jackson and who are clearly haunted by their eager blindness to the blatant sexual abuse happening right under their noses. Leaving Neverland largely focuses on interviews with Safechuck and Robson, with extra insights from their mothers and siblings. No outside voices are allowed. And what emerges is a granular, intensely vivid recollection of a two-decade saga of adulation, affection, friendship, love and a profound betrayal that bore trauma which has lasted long after Jackson’s death.

Yes, the sexual details are myriad, graphic and shocking. Hugging led to rubbing; kissing led to French kissing, which led to oral sex and masturbation. The acts happened often and all over Neverland: in Jackson’s bedroom closet, in Jackson’s personal movie theater, in an attic that was strewn with toys. “There were toys everywhere,” said Safechuck. “And we would have sex there.” It happened in a jacuzzi, upstairs in the estate’s private train station and in one of the teepees set up outside. Safechuck frames the daily sex regimen in terms of young love. “It sounds sick, but it’s kind of like when you’re first dating somebody. You do it a lot.”

Most mind-reeling is Safechuck’s admission that Jackson had a mock wedding ceremony between the two of them. At one point during his interview, Safechuck brings out a box of jewelry that includes the wedding ring—a row of diamonds down a band of gold—as well as other pieces that Jackson “sold” to him for sexual favors. “We were like a married couple,” he said, his hands shaking as he held the rings. “We were falling in love.”

The epic screening was a bona fide gut-punch. And once the credits finished rolling, Reed brought Safechuk and Robson onstage to rapturous and cathartic applause. Even more touching was the fact that, for legal reasons, the two men hadn’t been allowed to meet each other until the film debuted. “Being able to be with James is incredible,” said Robson. All we wanted was to talk and communicate. The film was nothing we ever sought out.”

Safechuck agreed. “It was a long time coming, just connecting with him.” And he also stressed that neither of them were paid to participate in the film. “There was no money offered,” said Safechuck. “We never expected anything. We just wanted to shine a light on it.”

Indeed they have. The first question from the audience was more of a declaration. “I had a man stick his hand down my pants, and no one believed me,” said an older victim of sexual abuse, thanking Robson and Safechuck for being brave enough to come forth. “I think you’ll do more for children than Michael fucking Jackson.

Another person asked Robson and Safechuck what they would say to the die-hard fans that will never believe them. “I don’t think I need to say anything to them,” said Robson. “Except that I understand. Because I was one of them. We can only accept and understand something when we’re ready. And maybe they never will.”

Leaving Neverland will air on HBO in March. 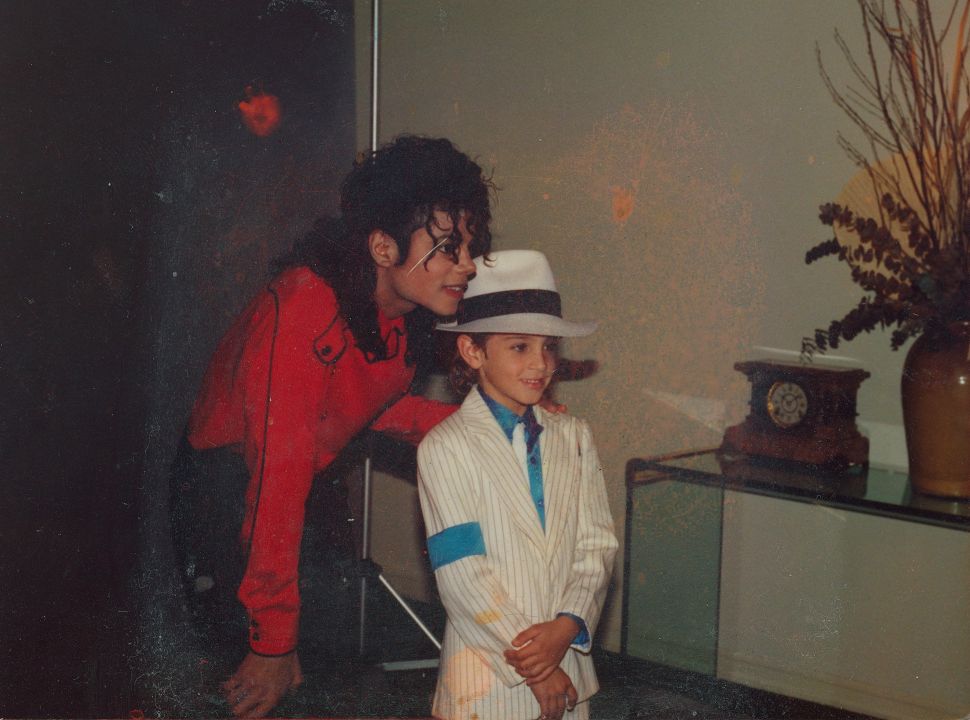