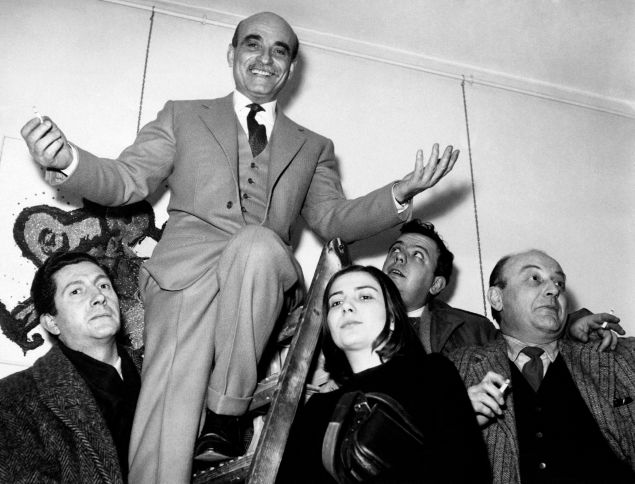 Argentine-Italian artist Lucio Fontana (1899–1968) is best-known for his simple compositions of slashed, monochromatic canvases and heady manifestos. At first glance, the Met Breuer’s huge retrospective of the artist, (open January 23) might sound like dry fare that’s not the guaranteed blockbuster the institution needs to bolster attendance. (While the gorgeous modernist outpost has seen numbers about on par with The Whitney’s when they ran the space, attendance hasn’t yet risen to match the crowds drawn to exhibitions at The Met’s main location on Fifth Avenue). But there’s reason to believe it could be. The exhibition, called “On the Threshold,” marks the first major stateside retrospective of the artist in over four decades, and the breadth of work on display from Fontana’s surprisingly diverse career promises to appeal to a crowd beyond those with art history MFAs. 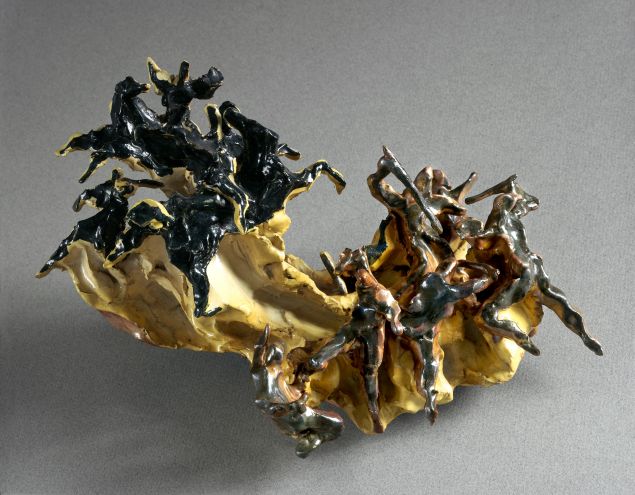 Somewhat ironically, Fontana didn’t begin making the slashed paintings (or “Tagli”) that most people remember him for until slightly before his first major retrospective in 1959. Born at the tail end of the 19th Century to a sculptor father who made funerary monuments for Argentina’s Italian immigrant community, Fontana grew up immersed in aesthetics that were anything but minimalist.

The first decades of his career were spent making delightfully weird objects that blurred the lines between the “kitsch” of his upbringing and Europe’s new modernist movements, well before the collapse of those distinctions became talking points of the art world. Think brightly-painted figurative plaster sculptures and lumpy ceramics in vibrant glazes and you start to get the idea. 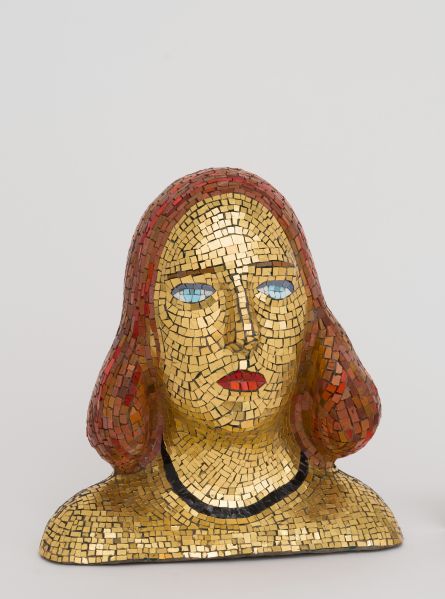 There’s a tense-yet-playful sense of exploration in Fontana’s 3-D work that feels unexpectedly contemporary—so many of his ceramics in particular wouldn’t look out-of-place in a trendy Lower East Side gallery today. The potential of “On the Threshold” to feel timely lies in the uncanny feeling that Fontana’s era bears some resemblance to our own, as the artist’s output was always influenced by uncertain political contexts.

Bouncing back-and-forth from Europe and South America, he lived through two World Wars and the rise of demagogues in both Italy and Argentina. His work flirted mischievously between the tastes of Italy’s fascist mainstream and his avant-garde peers. One can see a populist naivety in Portrait of Teresita (Ritratto di Teresita), a mosaic-clad bust from 1940. And then there’s a violent dynamism to Battle (Battaglia), a ceramic from 1947 that feels like a direct heir to the macho Italian Futurist movement.

But between experimenting with different modes of representation Fontana embraced abstraction, perhaps escaping into the uncomplicated enjoyment of materials and form. For anyone feeling a little lost and helpless in today’s political climate, it’s comforting to see that one of the 20th century’s great creatives spent a lot of time soul-searching too. 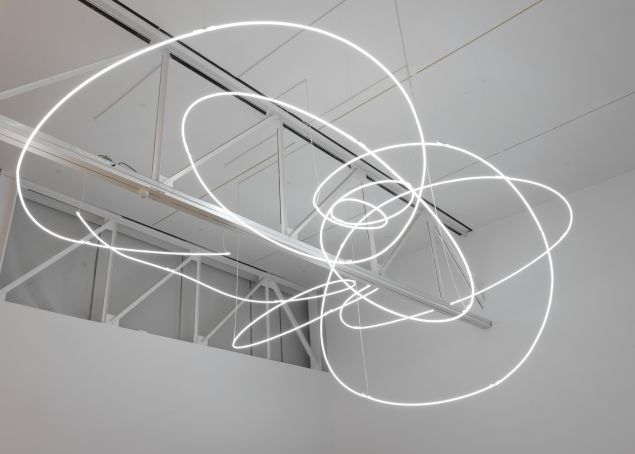 All things arise from necessity and are of value in their own time. – The White Manifesto, 1946

By 1946, Fontana had fled the war in Europe and found himself working as an official sculptor back in Argentina. It was here that he and a group of students published their (unfortunately named) “White Manifesto.” In it, they advocated for a new form of art—one divorced from reason, which they felt had plunged the world into chaos—and an embrace of the subconscious. When Fontana returned to Italy the following year he found his studio in ruins, destroyed by the allied bombing of Milan. This experience pushed Fontana to a near-total break with the past and the founding of a new art movement, Spazialismo (Spatialism). With Spazialismo, Fontana foreshadowed concepts such as installation art and environmental art—using lighting, color and architectural interventions to create spaces for the viewer to experience in real time. 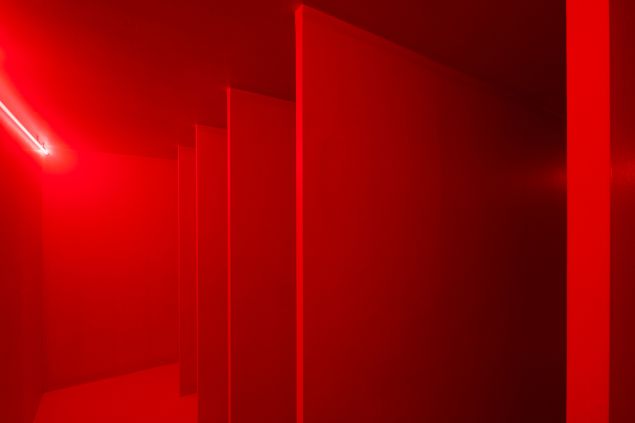 “On the Threshold” is impressively re-staging several of these ambitious works. One, Spatial Environment in Red Light (first installed in Amsterdam, 1967), can be found on the fifth floor of the Met Breuer. Another, Spatial Environment at Documenta 4 (Kassel, 1968), is on view at El Museo del Barrio. The latter is notable as the last environment Fontana designed before his death in 1969. This is a rare opportunity to explore immersive installations from the godfather of the genre—authored well before the advent of the Instagrammable art experience. 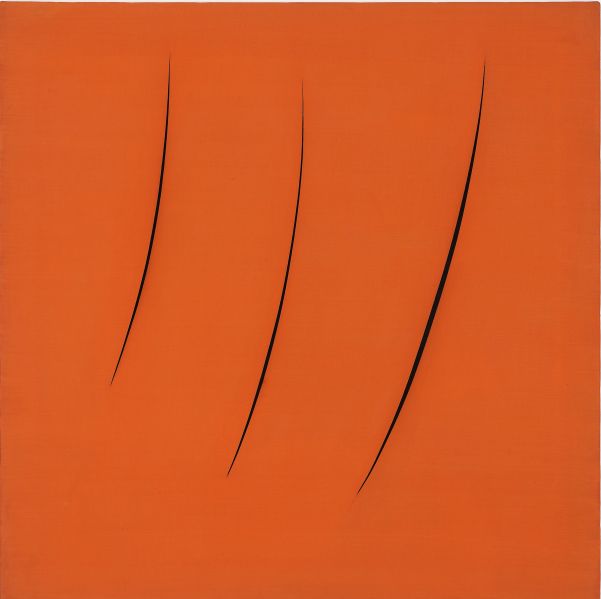 Those Slashed Paintings Have Their Place, Too

For all of Fontana’s experiments bringing four dimensions to various media, those he performed on canvas are what made him a household name in art circles (it always comes back to painting, doesn’t it?). Globally, the 1950s were a time when artists strove to redefine painting as an “index” of an action—that is, the object being considered as the record of a performative act, rather than the act of “painting” existing in service of producing an object. In Japan, the artists of the Gutai movement threw themselves in mud. In the United States, the abstract expressionists downed whisky before throwing paint on their backdrops. A certain French artist famously covered naked women in paint to use them as “living brushes.” What could be more Italian than stabbing a canvas?

But really, these works have to be seen in person to be appreciated. Fontana never thought of his paintings as images that could be reproduced by photography—like all of his works, they were experiments with space, shape, and time. For Fontana, the canvas picture plane was just another material object to be questioned and warped into new forms—something we haven’t stopped doing since. 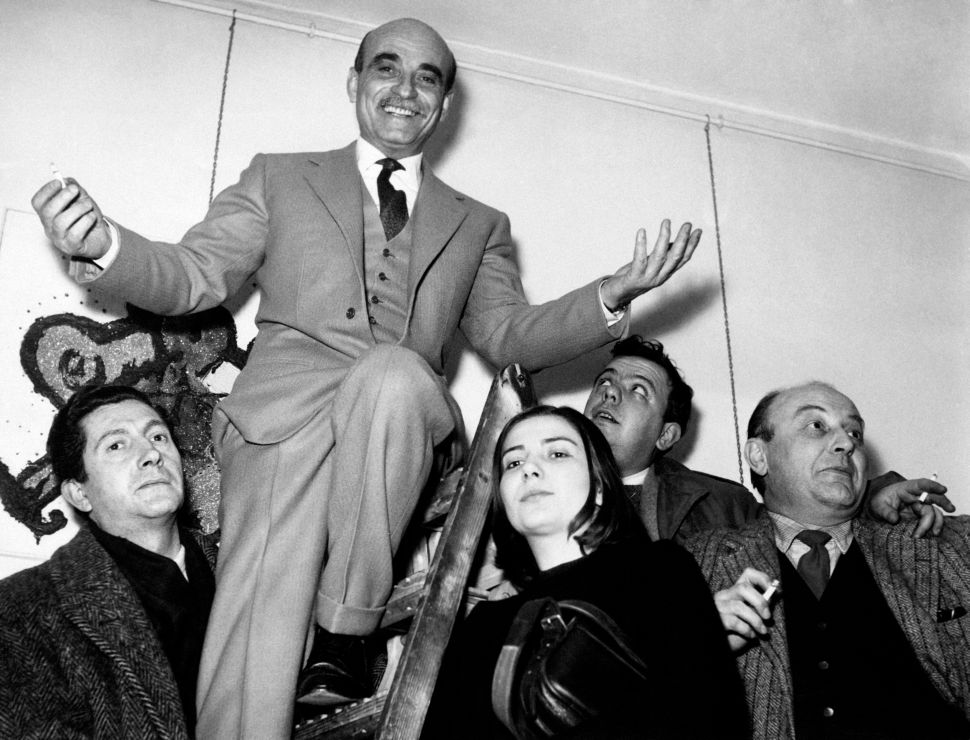