Meghan Markle wasted no time getting right to work for her new royal patronages. The Duchess of Sussex was only just named the patron of four separate organizations (National Theatre, Association of Commonwealth Universities, Mayhew and Smart Works) by Queen Elizabeth this morning, but the erstwhile Suits actress already attended her first engagement in her role for Smart Works.

The official confirmation for Markle’s new patronages comes eight months after she married Prince Harry, and they are all very fitting for the former actress and blogger due to their focus on the arts, education access, support for women and animal welfare, as Kensington Palace pointed out in a series of tweets with the announcement. The Duchess of Sussex made a surprise first appearance as royal patron of Smart Works early today. The organization helps long-term unemployed women reenter the workforce and improve their lives by assisting them in regaining their skills and confidence.

Markle’s first official visit included joining a discussion with program volunteers and women they have supported through the process of successfully obtaining jobs. A big part of the charity’s mission is helping to style and coach the women for the interviews, which Markle dove right into. The Duchess was photographed personally selecting and styling the perfect sartorial ensembles for the program’s attendees, and sat in on the coaching sessions.

The Duchess of Sussex’s own apparel for the event was noteworthy too, of course. She donned a $218 dress by maternity brand Hatch (which is already sold out), with a $2,990 cotton-twill Oscar de la Renta coat and cow print Gianvito Rossi PVC heels that are sadly no longer available.

While Markle was expected to receive her first royal patronages soon, one of her new organizations was accidentally revealed a day early. On January 9, the National Theatre’s website accidentally shared a photo that declared, “The Duchess of Sussex announced as our new Royal Patron.”

The Duchess of Sussex’s visit today is just the beginning of her work with her new charities, as it looks like Markle really is packing her schedule up to her due date, including stops at all her new patronages—she’s going to visit the other three organizations in the coming weeks, including an appearance at animal welfare rescue charity the Mayhew on January 16. Perhaps it’s time the Duke and Duchess of Sussex bring a new pet into their home. 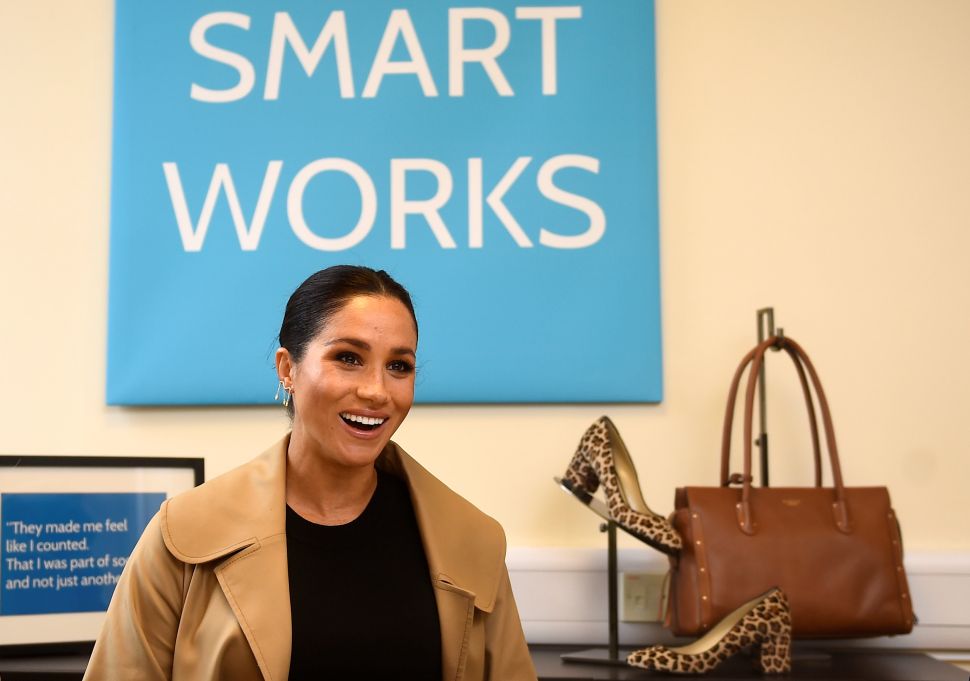