“Maybe you don’t want to take off that blindfold!”

Opera, at least as it performed in large-scale theaters like the Metropolitan, is firmly centered around the masterpieces of the 19th century—Verdi and Wagner, the bel canto works, plus (as they are generally understood) backward-looking pieces like La Bohème.

And so we, the audience, can sometimes slip into the complacent attitude that the art form itself is purely a function of certain “romantic” ideas current during that century: patriotism, self-sacrificing love, honor and a sort of “natural” progression of darkness into light.

Thus it is both a curious and an encouraging idea that the Met is currently reviving one of their darkest presentations (in both figurative and literal senses): a double bill of Tchaikovsky’s Iolanta and Bartók’s Bluebeard’s Castle, a Mariusz Trelinski production I called “the most spine-chilling thriller currently playing” when it opened four seasons ago.

The show is every bit as disturbing now as it was then; in fact, with a not quite so starry cast this time around, the focus has shifted most effectively to the music and Trelinski’s nightmarish nonlinear visuals.

The luscious Tchaikovsky score relates the fairy tale of Princess Iolanta, who has been blind since birth, her disability deliberately concealed from her by her controlling father. A doctor offers a possible treatment, which can work only if she understands and desires sight. She agrees for the sake of the man who has “opened her eyes” to the outside world.

And everyone rejoices, right? Well, no. After all the flashing spotlights and silver glitter of the finale, one character remains on stage, silent and at best conflicted about Iolanta’s transformation. Is this a happy ending?

In the second (unrelated) opera, Trelinski continues to ponder the perils of this desire to see everything. The mysterious Bluebeard offers his bride, Judith, keys to his castle’s many doors, which conceal increasingly distressing secrets. What’s behind the final door is both apocalyptic and, horrifyingly, predictable. Call it Hungarian Horror Story: we can all see the ghastly denouement approaching, and yet we can’t do a thing about it.

Uniting the disparate pieces, the director sets both in a clearing in a gloomy, blasted-out forest: we can see only the gnarled roots of enormous trees but neither greenery nor sunlight. Iolanta is imprisoned in a sort of museum installation space where passers-by can gawk at her, and Bluebeard’s manse is a suite of unrelated chambers with no logical geography. As the blindfolded Judith eventually realizes, there is only one way out.

As the entrapped Iolanta, Sonya Yoncheva gave about the loveliest performance I have heard from her at the Met, the relatively low music lying in the warmest and most colorful part of her lyric soprano. Particularly moving was her body language, never self-pitying but always expectant and hopeful. (The sweetness of that attitude created the most poignant contrast with the dashed hopes of everyone later in the show.)

Bass Vitalij Kowaljow smoldered and snarled as the manipulative King René and tenor Alexey Dolgov offered bright, boyish tone as the “prince charming” Vaudémont. (He also saved the show by jumping in on just a few hours’ notice to replace an ill colleague, a lesson in preparedness the producers of last night’s Rent Live might study.)

I don’t know if the casting for Bluebeard was intentionally age-specific, but it was fascinating to see the two 50-something artists Angela Denoke and Gerald Finley warily jousting at questions that, after all, it can take a lifetime to address. She deploys her worn soprano with gallant finesse; he, singing in a register just a tad low for optimum projection, hints at Bluebeard’s ferocity rather than stating it outright.

Conductor Henrik Nánási seemed a little more comfortable in the lyrical Tchaikovsky score than the tense Bartók, though he did conjure up some ear-blasting climaxes in the latter score.

This critic had to sprint for the subway as soon as the curtain fell, but it was wrenching to flee the darkness, especially as the audience seemed so caught up in Trelinski’s spell they could hardly breathe, let alone applaud. 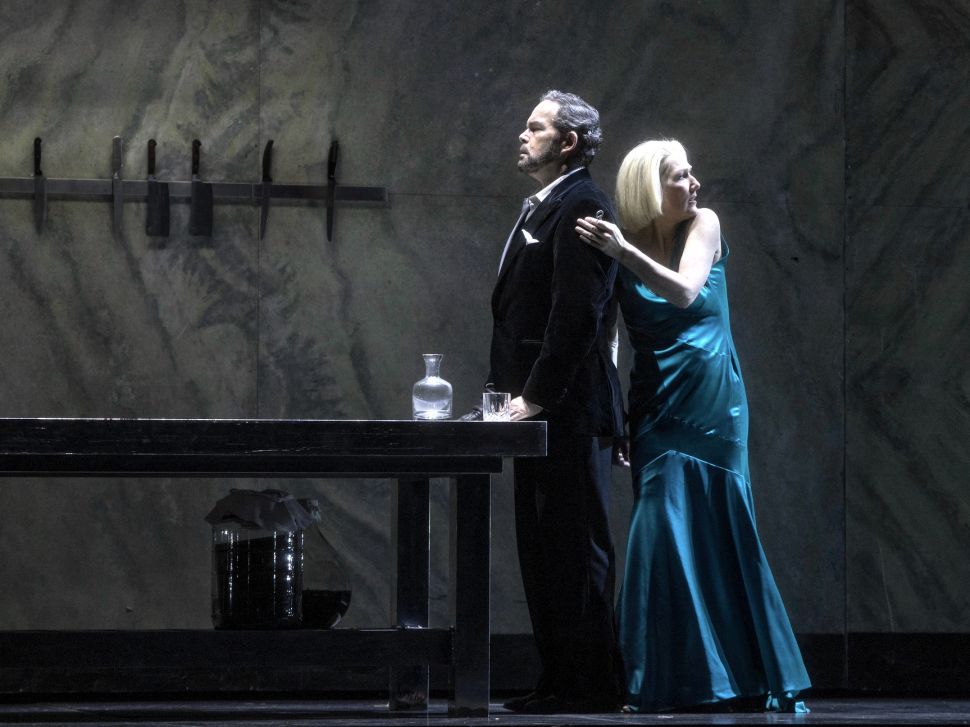