Call me a cockeyed optimist, but the glaring imperfection of the Metropolitan Opera’s revival of Pelléas et Mélisande is one of its chief virtues.

The ambiguous, shimmering work returned to the Met last week for a stint of barely two weeks, buried in the middle of January, traditionally a month nobody much goes to the theater in New York. The production and the cast are (with few exceptions) unremarkable, and even the conducting of the company’s new music director, Yannick Nézet-Séguin, feels a bit sketched-in.

So, on the opening night, the focus inevitably shifted to Debussy’s arcane score, which even after decades of listening seems to grow more gorgeous with each hearing. This music lies solidly in the center of the Met orchestra’s vast field of expertise. Under Nézet-Séguin’s leadership, their sound is evolving into a crisper, more transparent timbre. The sensation is like finally seeing light gleaming through a cleaned and restored stained-glass panel.

The conductor mostly adopted conservatively moderate tempos, after an attempt at a ponderous approach to the prelude to the work, which lacked tension. I liked the romantic sweetness the maestro found in the score, though he seemed a little aimless in the bleak last act as Mélisande very gradually and very quietly dies.

Part of the problem was the inexperienced singers in the title roles of the unfortunate lovers: tenor Paul Appleby as Pelléas was fighting a losing battle with a recalcitrant voice and mezzo Isabel Leonard seemed to be making up the words as she went along. (And, before you ask, I don’t mean she sounded artfully spontaneous. I mean she sounded like she needed another week of coaching.)

She does have a lovely, warm voice and is a breathtakingly beautiful young woman: we saw all that in Marnie earlier in the season. What she lacks, though, is any real sense of mystery onstage. Everyone in the show keeps asking, “Who is this maddeningly elusive will-o’-the-wisp pixie Mélisande?” and frankly the only answer I could think of was “Who cares?”

But again, this undercasting had the effect of spotlighting the superb performance of bass-baritone Kyle Ketelsen as Golaud. Even in a dramatic vacuum, his poised lyric voice and understated acting created a complete and very sympathetic character. What’s more, his performance was elegantly musical, gliding effortlessly between half-spoken recitative and full legato like the most expert interpreter of French chansons.

Of all operas, Pelléas et Mélisande is among the most in need of careful curation; sadly the Met threw it on the stage among the dusty debris John Conklin “designed’ for this piece (and every other opera in the repertoire) back in the 1990s. Of Jonathan Miller’s faux-Edwardian production, which already looked dated and mannered during the first Clinton administration, no glimmer of theatrical energy survives.

Still, all praise to Debussy. Maybe next time the Met will be willing to meet his genius halfway. 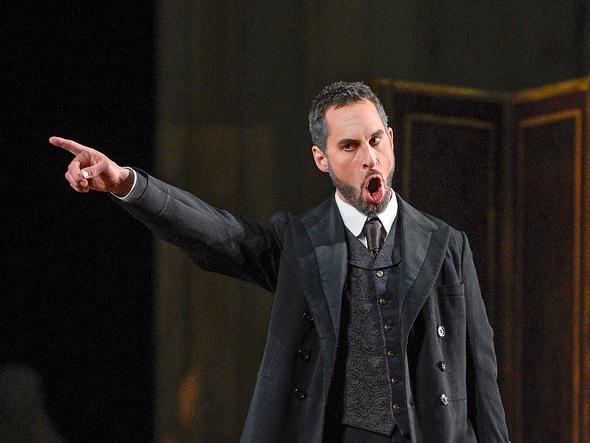