In April 2017, when the ill-fated Fyre Festival descended into a Hunger Games fiasco featuring the rich and status-conscious, it soon became a shared moment of collective enjoyment for a nation hungry to see the pimple-free influencers of Instagram get their comeuppance.

Like a nation of Nelsons from The Simpsons, we un-pretties joyfully pointed at, ha-ha’d and—for once—felt superior to the #FOMO refugees stranded at a Bahamian airport or sleeping in FEMA tents on rain-soaked mattresses. News sites had a field day aggregating the desperate tweets and funny memes for listicles and breathlessly using social media to recruit on-the-ground sources for post-disaster stories. That’s what you get for spending $12,000 to see Blink-182.

First, for the people who worked tirelessly to put on the doomed festival or were employed by any of the business enterprises run by the festival’s grifting co-founder, Billy McFarland, the experience was a trauma that will have a lifelong—and profoundly unfunny—psychological and financial impact. Secondly, while it’s comforting to think of the Fyre fiasco as an updated Icarus myth for self-obsessed Instagram hucksters, the story is more accurately a cautionary tale about the failure of journalism. By showing that there were almost no reporter heroes who were ahead of the story (only The Wall Street Journal was there to warn us, but by then it was too little, too late), Smith ends up exposing the journalistic economy as so utterly dependent on hype and marketing that it has lost sight of its reason to exist: to tell the truth and provide service to its consumers.

For Smith and the other filmmakers behind Fyre—as well as Hulu’s Fyre Fraud, which, in keeping with the cutthroat nature of internet commerce this story encapsulates, was launched covertly days ahead of this film’s release—their task is formidable. For starters, the cat is out of the bag; anyone who has been on the Internet in the last year or so knows the basics of how the story begins and ends. But Smith succeeds in providing emotional heft and context to the oft-told tale by illustrating the depth of the planners’ betrayal, delusion and commitment to the cause, even well after it became apparent that it was a lost one.

Many of the details presented I had either forgotten or never knew, like that the whole festival debacle began as a promotion for Fyre, an app purporting to be the Uber of talent booking and spearheaded by Ja Rule and the dough-faced entrepreneur McFarland. (The pair is shown launching the product at a 2016 Musicnotes panel hosted by onetime Atlantic contributor and former Spin editor-in-chief Michael Hirschorn, one of many journalists or former journalists who were either along for the ride or asleep at the wheel.)

Much of the focus of the story is the nature of hype in the age of Instagram. McFarland paid a host of models—among them Emily Ratajkowski, Bella Hadid and Hailey Baldwin—to shoot a now infamous promotional video. He then paid the social media company @FuckJerry to enlist 400 influencers to share the clip and promote an event—or really a concept—that would never, and could never, exist. (Some of the models, influencers and the production company behind the video would later become subjects of class action lawsuits).

But it is McFarland, with his toothy grin, ever-present bottle of half-finished beer, and his conscience-free ability to promise and sell things he knew he had no ability to attain, who is at the center of the story, even while the man himself remains a cypher. Unlike the Hulu version, McFarland never sat for an interview for this movie, and he is not missed. Contrasted with his business partners, who struggle with their culpability even while they are getting fleeced, McFarland never demonstrates any capacity for self-reflection. Indeed the most chilling footage features McFarland, free on bail and targeting former Fyre victims with new ticket scams for elite events.

But McFarland’s real, unindicted co-conspirator is the press who enabled his cons and paid little to no attention to his easily identifiable frauds. (Music bible Billboard, for example, was still reporting on acts being booked a month before the event, long after the cash had dried up.)

Watching the movie, one gets the sense that the press—like McFarland—just can’t help themselves.

Look at last week’s Golden Globes: entertainment journalists largely reported with astonishment on the photo bombing Fiji Girl as if it were a newsworthy event and not simple product placement. (In-depth analysis of the questionable practices of that particular company were available for those who took the time to look.) As this film shows so incisively, give the press a pretty girl and a shiny product, and we dive into those supposedly clear blue waters without thinking twice. 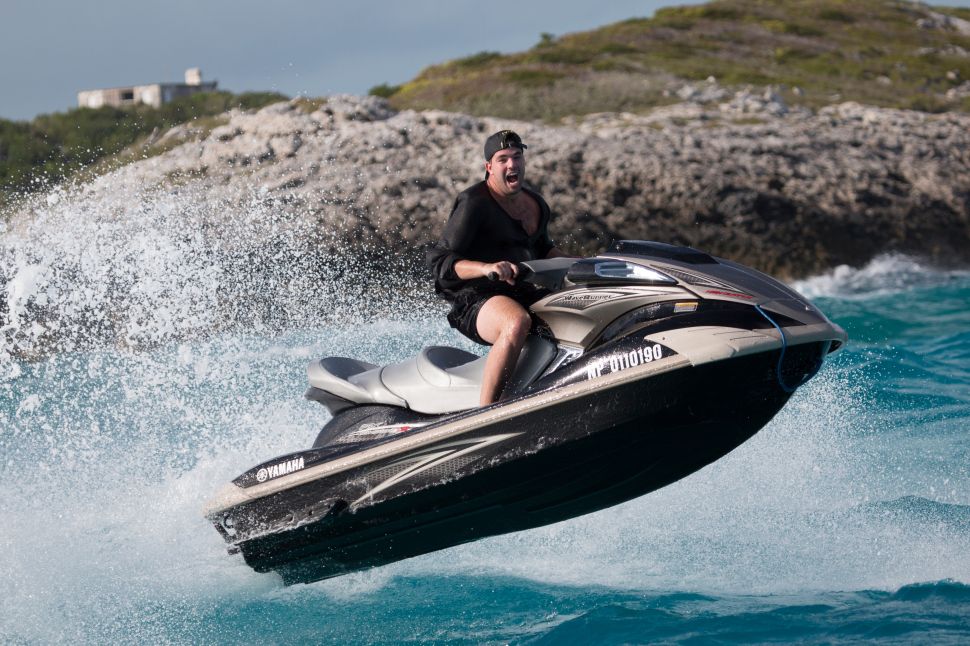