German filmmakers never stop searching for new ways to explore the guilt, remorse and confusion of their country’s violent, sordid and tragic history that haunts every successive generation. Florian Henckel von Donnersmarck, one of the best, won an Oscar for his debut feature, The Lives of Others, about postwar terror in East Berlin under the Communist secret police. Now his third film, Never Look Away, an epic that spans 30 years of German ideology through the eyes of a painter seeking truth through art, is again a front-runner for the Academy Award for Best Foreign Film. It’s more than three hours long, which doesn’t guarantee much hope for a box-office bonanza, but another prize could change that. Meanwhile, see it and prepare to be stunned and exhausted at the same time.

Inspired by the early life and celebrated later career of renowned contemporary artist Gerhard Richter (called Kurt Barnert in the film), the film opens in 1937 when Kurt is a sensitive, talented boy whose dream of becoming a painter is thwarted by Hitler’s condemnation of all modern ideas and avant-garde art under National Socialism as decadent and evil. Traumatized by the Nazi suppression of anyone who disagrees, he watches his father devalued and punished for his objections to Nazi tyranny, banished from his beloved home in Dresden and sent to a remote country village to live.

The guiding influence in little Kurt’s life is his beautiful, free-spirited, 23-year-old Aunt Elizabeth, who marches to a different drummer and teaches the boy to  keep an open mind and “never look away.” “Everything true,” she believes, “is beautiful”—a talisman he lives by in the years that follow. When uptight relatives see her exposing herself to the boy to teach him about the beauty of the human body, they pack her off to an asylum run by a gynecologist (played by the great German actor Sebastian Koch, who also starred in The Lives of Others). His specialty is euthanasia. His goal is to eliminate not only Jews but anyone suspected of mental illness in order to keep the German bloodline pure. Aunt Elizabeth is judged schizophrenic, declared unfit to bear children for the Fuhrer, and sterilized and gassed. Kurt never sees her again, which breaks his heart and leaves him emotionally scarred.

After the war, when Kurt becomes a young art student (now played by popular German heartthrob Tom Schilling), the Nazis have been replaced by a new breed of dictators under Communism in what has become the German Democratic Republic. They embrace the same prejudices as the Nazis, eschewing modern art as the epitome of decadence and using Pablo Picasso as an example. Still seeking the truth through art, the disillusioned Kurt finds solace in the arms of a pretty fashion student (Paula Beer), also named Elizabeth, who reminds him of his aunt. Her stern father calls her Ellie. He’s a snob and a social pariah who, unbeknownst to Kurt, is the same man who sentenced his aunt to the gas chamber.

By 1961, Kurt and Ellie marry against her family’s objections, and when her father discovers she is pregnant, he performs a cruel abortion that wrecks her future chances to have children. The couple defects to the West, continuing their quest for artistic freedom, but even after he is admitted to the academy of modern art in Dusseldorf, Kurt encounters every kind of earth-shaking madness, from one student who shreds wallpaper and calls it art to a man who slaps wet piles of felt and grease on bare walls and calls it the future. Kurt ends up scrubbing floors in a gynecology clinic and staring at empty canvases. “Painting is dead,” says a fellow art student who spends his days hammering nails to a board and calling it art, “just like folk dancing and lace making and silent movies.”

Never Look Away dangerously approaches melodrama at times, dragging through three decades of changes in art and politics, educating us all in more ways than an aching back can endure. I often thought, This movie is never going to end, but von Donnersmarck, who directed from his own screenplay, always manages to restore order. The ideas are cogent and valid, and the film that collates them is undeniably admirable.

Never Look Away has technical proficiency and attention to detail, and the cinematography by Caleb Deschanel is breathtaking. Clocking in beyond the three-hour mark, it is also preachy to the point of exasperation and desperately in need of editing. How he finds the truth that finally makes him famous is up to you to find out, but what it all adds up to is Kurt’s realization that he can only create the future by revisiting the past. I’ve reached the same conclusion about movies, but in half the time. 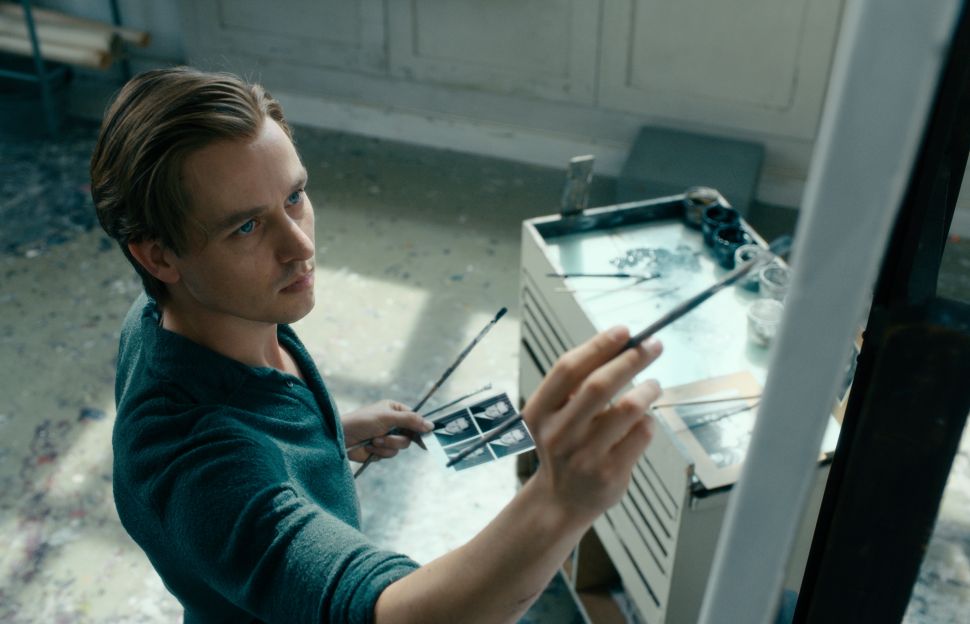