Former Gov. Chris Christie was never one to forget a slight, and in his new book, Let Me Finish, Christie blasts President Donald Trump’s son-in-law Jared Kushner for conducting “a political hit job” that supposedly cost Christie top positions in the Trump administration.

In the book, Christie said Kushner bore a grudge for the 2005 prosecution and imprisonment of his father, Charles Kushner, when Christie was U.S. Attorney for New Jersey. According to the Guardian, which obtained an advance copy of the Christie book, the former governor learned Kushner was working against him after Christie was fired from his job as the head of Trump’s transition team.

Steve Bannon, who at the time was Trump’s campaign chief, handled the dismissal. When Christie demanded to know what was behind the surprise ousting, Bannon told him Kushner had “been taking an axe to your head with the boss ever since I got here,” according to the Guardian’s report.

Christie, one of Trump’s first prominent supporters, said that when he was under consideration as a possible running mate for Trump, a campaign insider told him “the family” was very upset that Trump said Christie was his choice for Vice President, according to the report.

Christie’s book also details his relationship with Trump, including how the president selected Christie’s dinner when they first ate together in 2002. Trump also advised Christie to lose weight and recommended he wear his tie longer, as it would make him appear thinner, according to the Guardian.

Quote of the Day: “This was a campaign speech. Did you hear anything today that might change your mind about leaving the state?” — Republican Assemblyman Jon Bramnick on Gov. Phil Murphy’s State of the State speech.

Chris Christie Accuses Jared Kushner of Political ‘Hit Job’ in New Book
Chris Christie, who was ousted as chairman of Donald Trump’s White House transition team in 2016, has written a blistering attack on Jared Kushner, whom he accuses of having carried out a political “hit job” on him as an act of revenge for prosecuting his father, Charles Kushner, a decade ago.
The Guardian Read more

Christie to Speak, Sign Copies of New Book at Mendham Twp. Event
Chris Christie is sure to get the last word on Feb. 1 when he speaks and hosts a book-signing event in his hometown of Mendham Township.
The Daily Record Read more

In State of the State Address, Phil Murphy Pushes Legal Weed, $15 Minimum Wage
Gov. Phil Murphy had apparently planned to deliver a much different State of the State than the one he gave Tuesday. But he dispensed with what he called “business as usual” and instead devoted the first quarter of his roughly hour-long speech to a “broken system” of tax incentives that he said “it’s time to fix.”
The Record Read more

Legislative Leaders’ Minimum Wage Proposal Offers Compromises
Democratic legislative leaders presented Gov. Phil Murphy with a minimum wage proposal last month that reduces the time period for how long certain groups would get to $15 an hour, a plan that is less stringent than earlier proposals, according to a document obtained by Politico.
Politico Read more

NJ Property Taxes Have Doubled in 20 Years; See How Much They’ve Gone Up in Your Town
Property taxes in New Jersey, on average, have more than doubled in the past 20 years. But that alone is not the troubling part of the story.
Asbury Park Press Read more

Where Do Plastic Bag Fees Go? In Somers Point, One Store Is Donating to Charity
Santori’s Produce & Deli co-owner Gino Santori says the small grocer on Route 9 could bring in hundreds of extra dollars a month.
Press of Atlantic City Read more

Clergy Call On Murphy to Sign Bill Putting AG in Charge of Police Shooting Probes
Religious leaders say they are worried Gov. Phil Murphy will renege on a campaign promise he made to them to take controversial police shooting probes out of the hands of local prosecutors.
NJ.com Read more

Will New York’s Push for Legal Weed Pressure New Jersey to Act?
As Gov. Phil Murphy delivered his first State of the State speech Tuesday, listing marijuana legalization as a top priority for 2019, New York Gov. Andrew Cuomo laid out his vision for legalizing the drug in his own state.
The Record Read more

NJ Settles With Fiat Chrysler Over Alleged Emissions Cheating
A car manufacturer and engineering firm are paying $5.3 million to New Jersey to settle another case involving the installation of software to cheat on diesel emission tests.
NJSpotlight Read more

Barr Pushed Justice Department to Drop Menendez Case
Attorney General nominee William Barr told lawmakers on Tuesday that he had urged the Justice Department to abandon its prosecution of Sen. Bob Menendez, who was indicted on bribery charges for allegedly doing various favors for Salomon Melgen, a wealthy Florida physician who was a longtime friend and generous political donor.
Politico Read more

NJ Councilwoman Beat Husband With Broomstick and Cookbook, Cops Say
A Highland Park councilwoman is accused of beating her husband over the head with a broomstick and a cookbook.
NJ.com Read more

Activists Demand State Action for Buena Teen Wrestler Who Had Dreadlocks Cut to Compete
Activists on Tuesday again demanded that the New Jersey State Interscholastic Athletic Association permanently revoke the referee license of Alan Maloney, who sparked controversy last month when he gave wrestler Andrew Johnson 90 seconds to decide whether to have his dreadlocks cut or forfeit a match.
Inquirer Read more 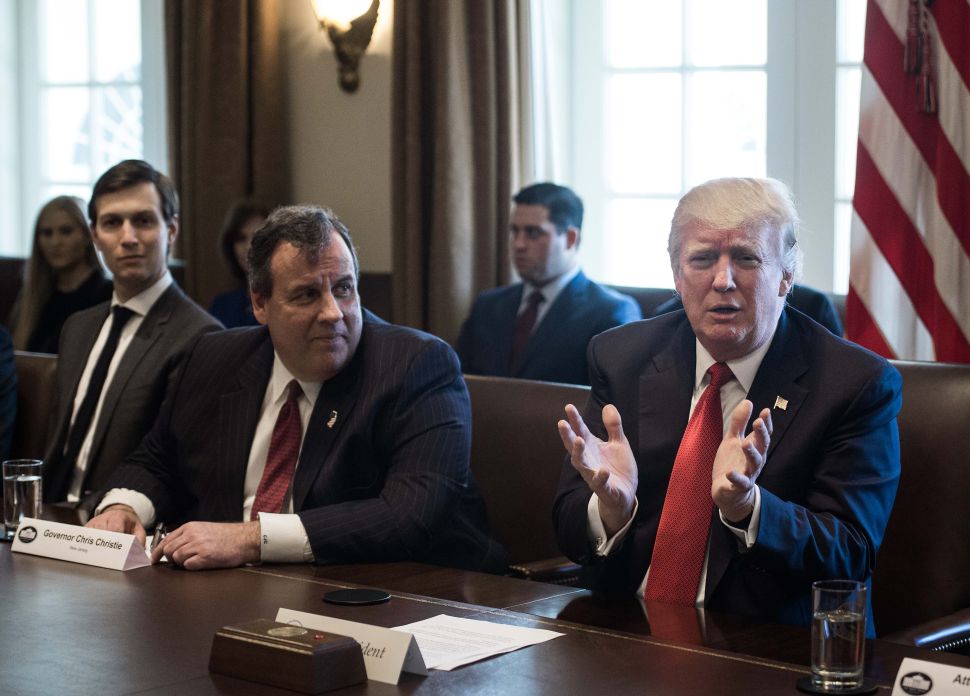