Based on the true story of Fauna Hodel, TNT’s new Patty Jenkins-directed miniseries, I Am the Night, follows Fauna (India Eisley) from her hometown of Sparks, Nev., in the 1960s, to Hollywood as she attempts to find her birth parents. Growing up believing she was biracial, she didn’t expect to find that she was in fact the child of a mother born to a well-to-do, white Californian family: the Hodels. That the connection soon leads to her finding herself involved in the Black Dahlia murder investigation was an even more shocking development. The famed murder happened in 1947, but it is central to this story set nearly twenty years later. Just as the capturing the exact look of 1960s L.A. was crucial to making this true story feel real for viewers watching at home.

Costume designer Rhona Meyers had her work set out for her in the clothing department, not only in making it feel authentic, but in overcoming an unexpected obstacle in the presence of at least five other 1960s-set projects in production at the same time. “There was a lot of stuff gone from the costume houses. A lot of things we had to repair; stuff that was left had a lot of sun damage and the linings were ripped out,” Meyers explained. She took Observer through some of the key looks she created to bring the atmosphere of the decade to life.

“In Sparks, Fauna is a school girl; she wears white or cream blouses. It is almost like a little fairy tale with the very ’50s crinoline skirts. When she is in Sparks, [her adoptive mother] Jimmy Lee (Golden Brooks) is keeping her in the dark. It is like a fantasy; a young girl being kept in the dark, she doesn’t really know the real world. Then all of a sudden in L.A. she learns a lot.

For Nevada, we decided even though it was 1965, we would do it in a 1950s feel so that when Fauna goes to Los Angeles it is a noticeable and shocking change for her. Things are so different. We took her prim and properness and put it in Americana 1950s. I found the coat [and wondered] how will they react to red? Because red sometimes on film is a no-no. But it just felt so right. I would put it down and pick it up, put it down and pick it up. No, I just have to have it.”

“When she goes to the Watts party [in L.A.], Black Power is starting. She loves it. That is when she changes. This [scene] is after she goes to the Watts party. People are more fashionable. So she starts adopting the black turtleneck. Paisley is very ’60s, we did the dropped waist to make her a little sassier. When she walks in there, she feels a little bit out-of-place in The Happening. She doesn’t know exactly where she fits or what is right or wrong. She is leaving that schoolgirl ’50s look behind.”

“I researched iconic ’50s and ’60s male figures; Steve McQueen, Clint Eastwood, Paul Newman and James Dean. An outsider kind of character, Jay is a mess. At 18 he was a top L.A. Times reporter, he had a lot of promise, but then he found this story of the Black Dahlia, George Hodel, and the illegal abortion clinic. [Hodel] ruined Jay. He entered the marines in the Korean War and killed a lot of people. Then he became a junkie. He was down and out. Now he’s a paparazzi reporter, going to the beach in a ’60s bathing suit and his Keds that he wore all the time.”

“He is stuck in the ’50s a little bit. His look is based on James Dean in East of Eden; the ’50s textured jacket. He has ’60s pants, he is mismatched.

Chris was amazing. I had to fly to Scotland for 24 hours to do a fitting for him. He was quite tired when he started because he had just ended that other movie [Outlaw King]. At first, we did the tweed jacket and he didn’t understand it. I explained that Patty was interested in having him be part of the past and not fashionable…Chris looks so good, a lot of the stuff started looking very modern on him. We had to do him in a specific way so you can tell this was period.”

How Art Influenced the Costuming

“Corinna was was the wife of George Hodel [the father of Fauna’s birth mother] she was a real woman—I believe her name was Dorothy Huston Hodel. She had quite a surrealistic vibe to her. In Corinna’s house, she has all kinds of art. We mixed her so when she is lounging, she is in kimonos and Chinese pajamas. We kept the Hodel side in 1940s because Patty decided it would be more rich and luxurious looking, but also that was the highlight of their life, that time period. They stayed in ’40s glamour.”

“She was also a performance artist, she took on a very ’60s Audrey Hepburn, beat poet look, mixed with a little bit of Jackie O. We did work in ’20s fashion with her too. She is a collector. She has the newest fashion, the museum pieces, even though she is not rich anymore, but she has collected it in the past. She has styled it to make her eccentric and odd.”

“It seemed right to have George in three-piece suits because he is so controlled, even though he is so crazy. It is neat. It is almost like he is two different people.” 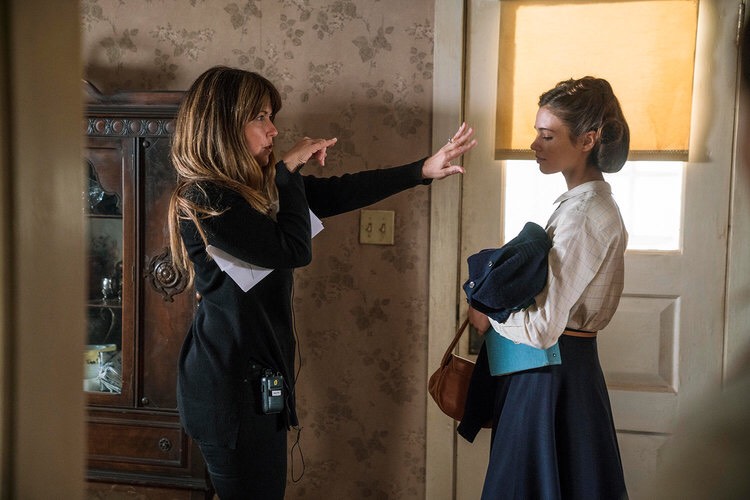