I am susceptible to suggestion. Especially the suggestion that, with very little effort, I can change the world for the better. So I stopped using plastic straws.

2018 was the year I learned that Americans use 500 million disposable plastic straws every day. That the world’s shorelines are littered with 8.3 billion plastic straws. Right now, by some estimates, 8 million tons of plastic float in the oceans. I was under the impression that all the plastics I dutifully dump into blue plastic bins are immediately recycled, but that is also wrong. Only nine percent of plastics are recycled. The remaining 91 percent will haunt the earth for thousands of years.

I was educated about the existential horror of plastic straws by social media. I watched a viral video of a plastic straw slowly being pulled out of the nose of a sea turtle. Then I realized that videos of animals suffering and dying from the excess of man-made plastics are everywhere. (The New York Times recently covered this one… have fun: “1,000 Pieces of Plastic Found Inside Dead Whale in Indonesia.”) I will confess that it took me a moment to connect the dots: the environmental havoc mankind is wreaking on the earth—whether it’s pollution or global warming—is going to work its way up the food chain to you and me. Internet people with PhDs in Internet Opinions were quick to explain that halting catastrophic environmental change was a two-step process and one of those steps was definitely eliminating plastic straws.

Only bourgeoisie pigs balk at liquids touching their lips!

So like any sensitive, virtue-signaling coastal elitist, I decided to do something about it. I retweeted some links to stories about environmental collapse. I declined a plastic straw at brunch in front of my friends, who were shocked. And I considered buying a $20 metal straw.

The fantasy would go like this: the bodega owner would hand me a bendy plastic straw and I’d slowly nod my head before reaching for my metal straw hip holster. Then, with a few flicks of the wrist, I’d open my metal straw like a butterfly knife. I’d then smugly pucker up and drink my kombucha, knowing that I was rescuing the sea turtles.

I didn’t immediately invest in a metal straw, though. Twenty dollars was still twenty dollars in 2018, and best spent on avocado toast. But I considered it because I wanted to make a difference without putting in too much effort. Yes, I was following the herd but the herd seemed to be everyone.

In July, Seattle, Washington, became the first major US city to put the kibosh on plastic straws and utensils. California became the first state to ban plastic straws from restaurants in September. If you want a straw in L.A. in 2019 you will have to look the server in the eye and say “I am a monster who hates mother earth may I please have a plastic straw so that I can, more conveniently, suck this cold-pressed juice into my evil garbage face?”

But it wasn’t just hippie governments on the West Coast who decided to tackle the plastic straw issue this year. Major companies like Starbucks, Hyatt and American Airlines joined in, banning plastic straws. The free market and the state were in agreement: the best way, at this moment, to be environmentally responsible is to eradicate plastic straws. If two cherub-faced lovestruck teens wanted to share a single milkshake at a soda fountain, now they’d have to use a paper straw, which doesn’t really stand up to excessive saliva, or save up for a metal straw that costs as much as six milkshakes.

I had gone from grabbing bouquets of plastic straws at 7-11 because I could to a radical anti-strawist in, literally, days. One moment I’m demanding a straw for my hotdog from a street vendor, the next I’m using mental telepathy to discourage a knit-cap wearing freelance graphic designer from reaching for that ice coffee straw. But these are the times we are living in: emotional decisions are made quickly and passionately because they feel good. There were some things I didn’t consider, like the needs of people with disabilities, who immediately protested plastic straw bans. These individuals aren’t always able to drink from cups for many reasons and plastic straws are helpful, to say the very least.

The metal straw trend grew so fast that few of us supposedly enlightened Captain Planets thought about the needs of other kinds of people who aren’t Captain Planets. I mean, I can afford a metal straw, I suppose. I do pay for multiple streaming services that I watch on a giant flat screen and I have been known to ride around the city in an Uber, like a prince. But not everyone can bear that expense. The ban straws movement had good intentions, but you know what they say about the road to hell. (Hell is insufferable do-gooders patting themselves on the back.)

For the most part, I believe average Americans care about the environment. They don’t want toxic sludge dumped in streams. They’re opposed to turning America into a gigantic junkyard. They know that human-triggered climate change is an indisputable scientific fact and those who argue against it are the same breed of obfuscating rent-a-researchers that the cigarette industry employed for decades. Saving the environment is a long-term problem that actual scientists claim is still possible to solve. It will be difficult. There are no easy solutions… like, say, replacing plastic straws with expensive reusable ones.

That’s not to say there aren’t environmentally thoughtful innovators out there who are trying to clean up the planet: Dutch inventor Boyan Slat created a 2000 foot long plastic pipe that can drag a 10-foot nylon screen through the ocean, a sort of trash lasso, that he and his investors think can help clean up the Great Pacific Garbage Patch, a human stain of floating plastics and detritus twice the size of Texas (there are at least four more around the world). These kinds of practical efforts should get more attention because I think they’d be popular. Even if they don’t actually work. Thanks for trying, Boyan!

The straw ban, however, is proving to be particularly unpopular. As it turns out, both conservatives and progressives enjoy the simple things in life. The conversation went from “Let’s save the environment” to “How the f**k am I supposed to drink this Big Gulp?” This is one way President Trump wins the culture war. He picks the small battles. It is inevitable that human civilization will one day either choose to change or be forced to change. That is a big debate. But instead of having a big debate, some of us are dying on a hill made of skinny little tubes.

The fossil fuel executives must have loved the Great Straw Revolt of 2018 because no one was talking about them. As it turns out, we should have been talking about them: Big Oil has been secretly trying to roll back car emissions standards that even car companies are fine with, which would pump more greenhouse gases into the atmosphere. So they can sell more gas. They’re like Hamburglars only instead of stealing delicious hamburgers, they’re destroying the climate for profit.

I knew my new cause was losing the moment I read a Facebook post from a proudly woke friend of mine who angrily complained that his local coffee shop in Upstate New York had substituted the regular plastic coffee straws with uncooked fettuccine. The barista told him he could eat the pasta if it got soft! “Coffee Ramen.” Well, this did not go over well with him at all.  His post was one of those really long ones that you glance at and think “that person is very angry.” And I found myself agreeing with him.

That’s when I realized I was guilty of jumping on a bandwagon like the smartypants liberal I am. I was a hypocrite. I preached about a life free from plastic straws, but I still asked for two plastic bags when grocery shopping. I didn’t stop chugging plastic bottles of . My food delivery orders were literal armfuls of plastic containers. I started deleting sanctimonious tweets about straws which is not unlike scraping off old political bumper stickers.

But the final, um, straw came when I was watching the 10th season premiere of ABC’s hit reality competition Shark Tank, which I call “Ayn Rand’s Project Runway.” One of the businesses looking for investment money from the sharks was a twenty-five dollar nine-inch-long triple-jointed stainless-steel collapsible straw. The two people pitching were cheerful and hopeful. They had already raised $1.8 million on Kickstarter for their socially-responsible product. But when the investors, capitalistic Care Bears every one, declined to invest in “FinalStraw” I realized that maybe the free market just can’t bear selling expensive robo-straws to tired, broke consumers who simply want to enjoy a can of teeth enamel-stripping sugar . Meanwhile, were local governments going to start kicking doors and busting black market straw dealers? Even the two greatest mortal forces, capitalism and the state, didn’t think this through.

In the new year, I will think twice before taking a plastic straw offered to me when I’m buying a soft drink with my twenty-piece chicken nuggets. I will also think twice when a trendy cause finds its way into my social media feeds. The important fights in life are long. They take discipline and patience and self-awareness to win. You may not live to see victory. But you should try anyway. 2018 is the Year of The Metal Straw because it was a year about small, superficial battles, not big, meaningful ones. Virtue signals, not actual virtue. Like this $175 sterling-silver straw engraved with your name. I hope 2019 is more serious about stopping climate change and environmental catastrophe. Otherwise, we may see a movement to ban sporks. 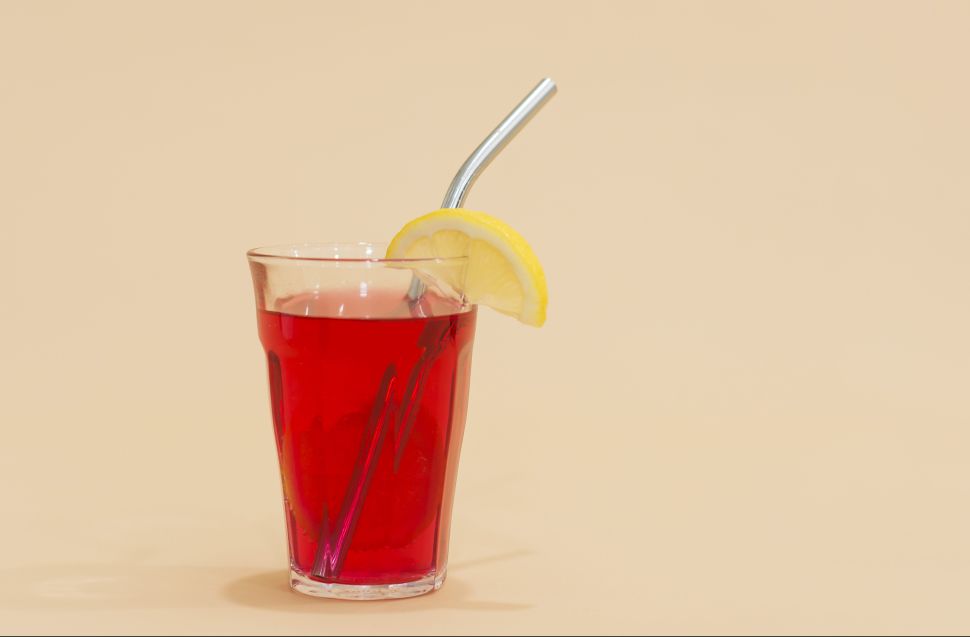