Pope Francis is the political and spiritual leader of the Catholic Church, an organization with more than 1.2 billion adherents and substantial real-estate holdings in nearly every country on earth. As such, he wields significant power and influence over both the bodies and minds of (conservatively) millions of people. When the pope acknowledged climate change as both a real and an imminent threat to be confronted with decisive action, as he did in 2015, it meant something.

It also means something when someone like Pope Francis openly acknowledges exorcism—that is, demonic possession of a human being’s consciousness (or their soul, if you really want to get metaphysical) and the ability of a priest to dispel the exorcism through ritual—as a real thing and a legitimate pursuit. And he does. This could be a problem.

Under Francis, exorcism and demonic possession have enjoyed a kind of renaissance in modern-day Catholicism. (There is a YouTube video of the pope supposedly performing the trick following a 2013 mass.) More and more Catholics report seeking exorcisms, and as the BBC reported last year, 250 priests from 50 countries traveled to Rome for exorcist training. Francis is encouraging this: in 2017, the pope told priests that “they must not hesitate” to refer their parishioners to exorcists if they experience “genuine spiritual disturbances.”

How much of this should you—or anyone, non-Catholic or otherwise—take seriously? That’s up to you, but it appears that satan and exorcism are now a part of our secular culture wars. In the recent past, examples of demonic possession in everyday life have included yoga, Harry Potter and gay marriage, according to one prominent exorcist. And according to an item published in the National Catholic Register last month, gender-neutral clothing and Celine Dion also qualify for the list of demonic “genuine disturbances.”

Earlier this year, Dion released a line of clothing for babies and young children that shed the old (and very much manufactured) blue-pink, male-female color-scheme dichotomy. Parents who want their children “to be free and find their own individuality through clothes” can don them now in the grays, blacks and reds of Celinununu.

Aesthetically, they seem fine—if a little monochromatic and boring by design, as well as a bit of a rip-off of what David Bowie was doing with the visuals for Blackstar, the record he released just before his death from cancer in 2016—but according to an interview that American exorcist John Esseff, a Pennsylvania-based priest, gave to the National Catholic Register, they are part of a greater satanic plot to blur gender lines.

“The devil is going after children by confusing gender,” Esseff told writer Patti Armstrong. “When a child is born, what is the first things we say about that child? It’s a boy, or it’s a girl. That is the most natural thing in the world to say. But to say that there is no difference is satanic.”

“People behind this are influencing children to disorder,” he added. “This is definitely satanic. There is a mind behind it—an organized mindset. The devil is a liar and there are huge lies being told… This is being done for money, and there is divisiveness that comes from this—marks of the devil.”

Interpreting shifts in gender identity as dark turns of the soul isn’t new; critiques of Robert Louis Stevenson’s Dr. Jekyll and Mr. Hyde interpret the short story as an examination of Victorian culture’s deep discomfit and abiding fascination with gender. If not quite an academic exercise, Esseff’s condemnation of Celine Dion and her line of expensive, anodyne clothes for kids as pure evil would be easy to pass off as the fringe ramblings of (if we were being charitable) an old eccentric priest—if it weren’t for the papal imprimatur.

The pope thinks demonic possession is real. Some of his priests see the devil at work in children’s clothing. What’s the next step? That’s unclear, but the list of options that spring to mind are not sound choices.

It doesn’t appear that church hierarchy has endorsed or amplified Esseff’s voice—or agreed that celebrities like Celine Dion are tools in the devil’s workshop—but under Francis, the good and chill pope, demonic possession is apparently a mainstream view and is being used to explain and to condemn certain changes in greater, secular cultural mores. That is a stark step away from rational discourse, and that is not what anyone needs.

In a world where religious animus is corralled to justify lynchings in India, this should be viewed with caution and not as a one-off joke. Last year, when Wiccans announced a spell circle meant to vex President Donald Trump, Catholic priests responded, seriously and soberly, that the spell had real power and “was not from God.” As a data-driven science, exorcism is the definition of bullshit, but as a social movement with people behind it, the devil and his works are very real and now apparently need to be confronted. 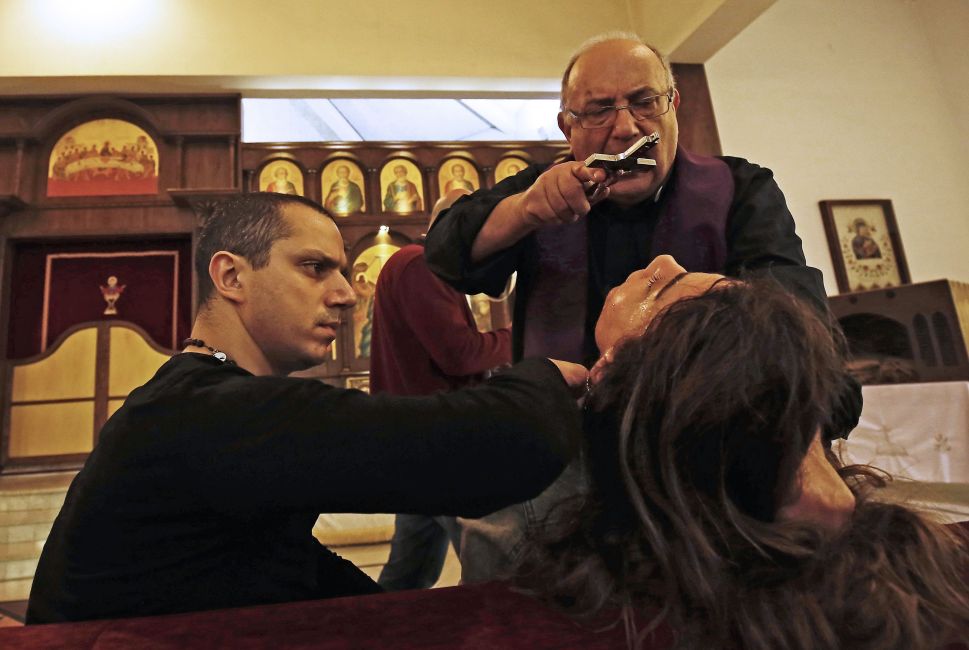