The Port Authority of New York and New Jersey will remove an art installation featuring a nine-foot tall statue of Saudi Arabia’s flag from the World Trade Center campus.

“We have been in contact with the 9/11 Memorial and various stakeholders, and in full collaboration with the artist will relocate the exhibit from its current location,” a spokesperson for the organization told Observer on Monday. “We believe this solution respects the unique sensitivities of the site and preserves the artistic integrity of the exhibit.”

Created by French sculptor Laurence Jenkell in 2011, the exhibit ‘Candy Nations’ depicts countries in the G20 Summit as candy statues, and has been featured at over 25 sites across the world. After Observer reported on its arrival at the World Trade Center, many Americans were shocked to discover a statue celebrating Saudi Arabia had been erected on the Ground Zero plaza—given the Kingdom’s alleged involvement in harboring terrorism, and that 15 of the 19 September 11 hijackers were Saudi Arabian.

“Having respectfully understood the art component of it, I was offended that Saudi Arabia was represented there, particularly that close to hallowed ground,” Tim Frolich, a permanently disabled survivor from the World Trade Center attacks, told Observer. “There’s no support out there for it from the 9/11 community.”

“It was pretty shocking,” added Brett Eagleson, who lost his father during the World Trade Center attacks. “For our family specifically, it hit home even more. My dad’s last words to us were that he was going up the stairs to grab radios to give to Port Authority.”

Both Frolich and Eagleson are currently represented in an ongoing federal lawsuit against Saudi Arabia’s government by the legal firm Kreindler & Kreindler. Last March, a U.S. federal judge rejected Saudi Arabia’s motion to drop the charges.

“To us, to have the Port Authority allow Saudi Arabia around Ground Zero when Saudi Arabia is in the middle of a federal lawsuit in Southern Manhattan is just unacceptable,” continued Eagleson.

When reached for comment by Observer last week, Jenkell said she had deliberated on removing the Saudi Arabia statue from Candy Nations’ tenure at the World Trade Center campus, but decided against it because “Saudi Arabia is entirely part of the G20 just like any other candy flag of this Candy Nations show.” The artist’s exhibit will find a new home at John F. Kennedy International Airport, where it will be prominently displayed throughout the AirTrain system.

“The Port Authority is apparently now taking the right action this week by removing the sculpture from the plaza at Ground Zero,” reads a statement signed by 16 families affected by the World Trade Center attacks. “Its apparent plan to relocate the exhibit to JFK International Airport is questionable as well, for obvious reasons. But surely the sculpture should be nowhere near the site of this mass murder.” 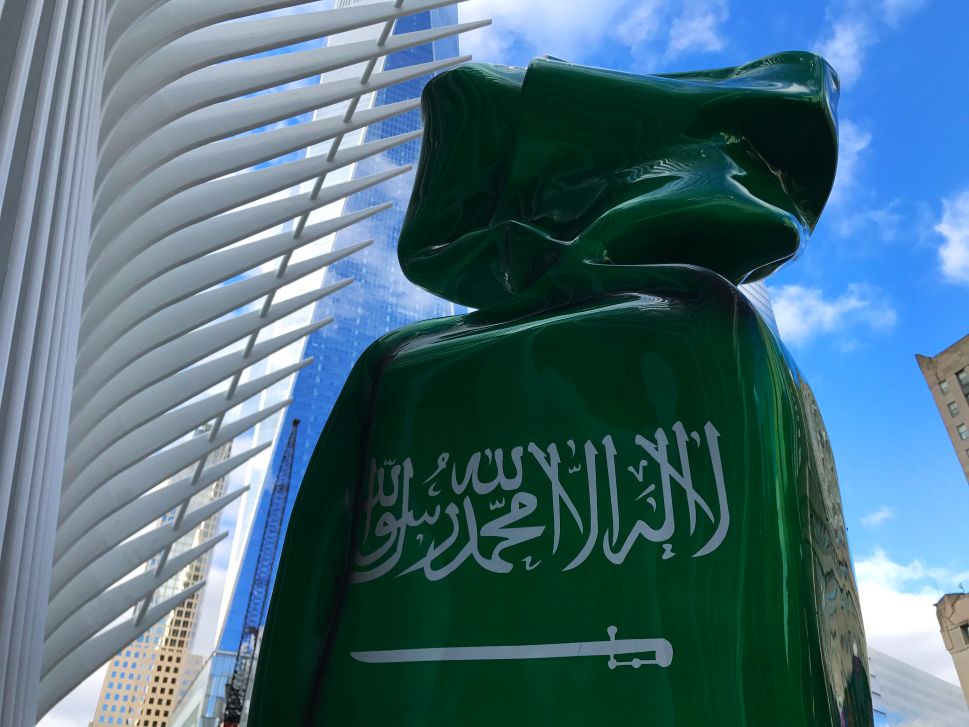