At this point in her multifaceted career, it’s pretty impressive that anyone would have the audacity to mess with Rihanna, but messing with Rihanna is exactly what her father, Ronald Fenty, has done.

On Tuesday, TMZ reported that the superstar has filed suit against her dad for piggybacking off her astronomical fame while trying to create his own business. In the lawsuit, Rihanna claims that in 2017, her father founded a talent development company under the name Fenty Entertainment. The problem with this is that Rihanna has already trademarked the name Fenty for use across her vast and expanding empire of apparel, beauty products and lingerie.

Rihanna has spoken publicly before about the abuse her father inflicted on her mother. Her new lawsuit appears to reaffirm her commitment to severing ties with him: The suit states that Ronald and his business partner “have egregiously and fraudulently misrepresented to third parties and the public that their company…is affiliated with Rihanna, and has the authority to act on her behalf.”

Out of context, the fact that Rihanna is suing her father comes off as pretty funny (petty, even). But over the years, a surprisingly large number of celebrities have turned to the law when their relationships with their parents became too toxic to continue down the path of the pre-established status quo. (Spoiler alert: Disputes like this are almost always about money.)

Child stars are practically in a category of their own. Naysayers and the morality police love to complain that young actors are in danger of being corrupted at an early age if exposed to the bright lights of Tinseltown, but in truth, more often it’s the parents of these budding celebrities who totally lose their heads at their first taste of serious cash.

Macaulay Culkin, Home Alone star and poster child of the 1990s, found himself an adolescent multimillionaire at the center of a custody dispute when his parents decided to separate and subsequently fight over his $17 million fortune. Culkin sued for emancipation, but was unsuccessful.

At 14 years old, the incomparable Jena Malone (Donnie Darko, The Hunger Games: Catching Fire) sued her mother for spending almost $1 million of her earnings without her knowledge; Malone won the suit and was able to cut off her parent’s access to her income.

Do some digging and you’ll find a ton of stories like Culkin and Malone’s: Parents make their kid a star, parents spend their kid’s money, parents fight with their kid and then the battle over money wages indefinitely. Just look at Aaron Carter, Corey Feldman, Gary Coleman and LeAnne Rimes. The list goes on and on, and even includes poor little Shirley Temple. No wonder so many former child celebrities seem traumatized.

Rihanna is somewhat of an anomaly in that she’s hitting her father with a lawsuit as an adult, although her case is not unique. In 2014, Kim, Kourtney and Khloe Kardashian filed a civil suit against their stepmother in which they contended that Ellen Pearson Kardashian had attempted to sell pages of their late father’s journal to the media. Pearson countersued, and the dispute was eventually settled out of court.

And at the age of 25, Gossip Girl star Leighton Meester sued her mother for spending money Leighton had sent her for the care of her brother on luxuries including cosmetic procedures.

If there’s any commonality between these stories, which are almost always distressing and seem to involve cumulative years of emotional pain, it’s that money corrupts, and parents will often feel entitled to the fruits of their offspring’s success. However, Ronald, we’d like to see you try to sing “Rude Boy” to a crowd of thousands. 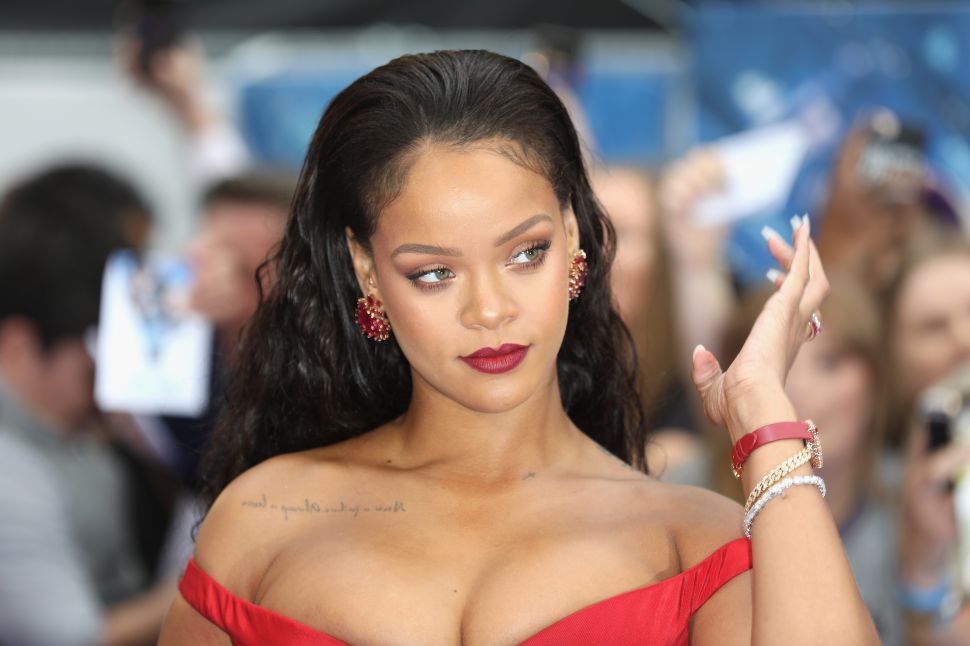