After Roger Stone was arrested by federal agents last Friday, and later released on $250,000 bail, the former Trump advisor began a media offense. Freewheeling between interviews on Tucker Carlson Tonight and Cuomo Prime Time, Stone sought to cement his Russiagate narrative as the dominant one, while promoting his legal defense fund. But the operative’s media blitz may serve another purpose: To sway a federal jury should he ever see trial.

If Stone influences public opinion enough surrounding his relationship to the Russia investigation, potential jurors may walk into a trial with pre-held opinions favorable to the operative. Stone meanwhile has leveraged similar complaints against the special counsel’s team, calling last week’s FBI raid on his Florida home “an attempt to poison the jury pool” during an interview with ABC.

“We’re in a new environment where a lot of these cases get tried in the press because we know jurors are watching the news and reading the papers,” former federal litigator Andrew Stoltmann told Observer. “I think if Stone’s trying to poison the jury pool, it’s a good strategy… He’s very media savvy and has every incentive to influence that jury as much as he can… Once a juror reaches a conclusion or has a strong feeling on a topic, jurors are very reluctant to change their minds. If you can influence a juror prior to the case beginning, that’s half the battle.”

If history is any indicator, however, jury manipulation via media is a risky tactic. Bill Cosby’s legal team unsuccessfully tried to argue that the disgraced actor’s jury pool in Pennsylvania had been permanently poisoned due to “extensive, sustained and pervasive” media coverage. Another attorney Observer spoke with also warned that this strategy could backfire for Stone.

“My belief is that he is trying to play the potential jury pool. But I also think he’s not in touch with reality,” Richard Roth, founder of The Roth Law Firm in Manhattan, told Observer. “It depends on how much the jurors watch television. These types of things come and go. His arrest was big news on Friday, and it’ll be little news next week… At the end of the day, the jury is going to be told by the judge that anything they’ve heard in the press, they can ignore. And they have to listen to the law the judge recites and the facts that come out. And the facts are devastating against Stone.”

Roth noted Stone’s indictment was very detail-oriented about falsehoods he gave to Congress during his closed-door testimony in 2017—speculating the politico was acting recklessly because lying to Congress carries less penalties than the tax fraud committed by Michael Cohen and Paul Manafort.

“Michael Cohen and Paul Manafort listened to their lawyers, or had better lawyers,” continued Roth. “They were told not to say anything. The strategy they employed was the correct strategy, even though they committed crimes.”

“Stone’s strategy is very similar to Trump’s strategy,” countered Stoltmann. “Most presidents would keep quiet and not comment on the Mueller probe. But Trump has taken Mueller head on and is pandering to a sizable minority of his constituents and specifically Republican lawmakers. And it’s having an impact. Stone might be taking a page out of Trump’s book to influence jurors who would decide his case.” 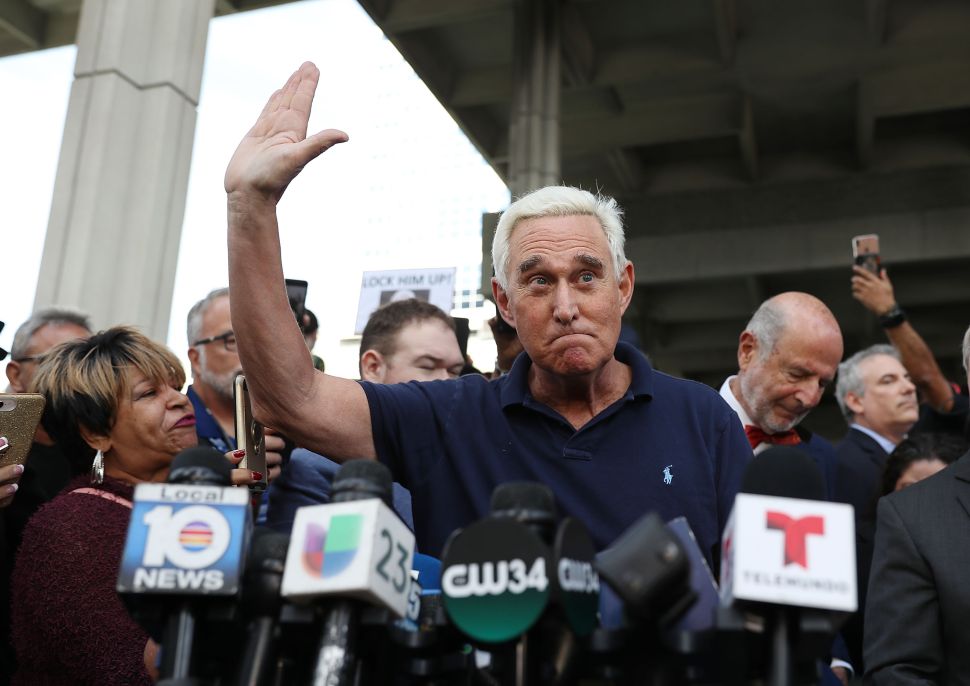