A sculpture celebrating Saudi Arabia’s place in the G20 Summit was erected on the World Trade Center grounds last week, a stone’s throw away from the 9/11 memorial.

Shaped to resemble a piece of candy, the nine-foot-tall statue bears the Kingdom’s emerald flag emblazoned with the Arabic inscription, “There is no god but Allah, and Mohammed is the prophet.” It was created by French sculptor Laurence Jenkell in 2011 as part of the larger installation “Candy Nations” which depicts G20 countries as sugary delights, and has since been featured in over 25 countries. All 20 sculptures are currently on display outside the Oculus shopping center.

“I first created flag candy sculptures to celebrate mankind on an international level and pay tribute to People of the entire world,” Jenkell told Observer in a statement. “Given the unique and justified sensitivities surrounding the World Trade Center, it came to my mind to propose to remove the sculpture showcasing the flag of Saudi Arabia, or relocate it to a less sensitive location. But there is no way I can do such a thing as the flag of Saudi Arabia is entirely part of the G20 just like any other candy flag of this Candy Nations show.”

The installation was curated and installed by the Port Authority of New York and New Jersey. When reached for comment, the organization pointed Observer to a December press release announcing the exhibit.

“In its continuing efforts to transform the World Trade Center site into a dynamic space in Lower Manhattan, the Port Authority announced that beginning today it will showcase famous candy sculptures around the World Trade Center campus crafted by renowned French artist Laurence Jenkell,” reads the statement. “Each of the sculptures features flags from countries in the G20 summit, and the art work was commissioned by companies and organizations including the Chanel Foundation, the International Olympic Committee and Coca-Cola.”

You can learn more about the "Candy Nations" art exhibit at https://t.co/cgbgPBY9Vn. #CandyNationsWTC #artexhibition https://t.co/yZ3tROz285

Although the installation was originally created in 2011 to convey “an optimistic message of unity beneath external differences,” its placement at the World Trade Center raises questions given longstanding accusations directed toward Saudi Arabia in the aftermath of the September 11 attacks. In 2003, hundreds of families affected by the 9/11 terror attacks sued the Kingdom over its alleged involvement in harboring terrorism—given that 15 of the 19 hijackers were Saudi. 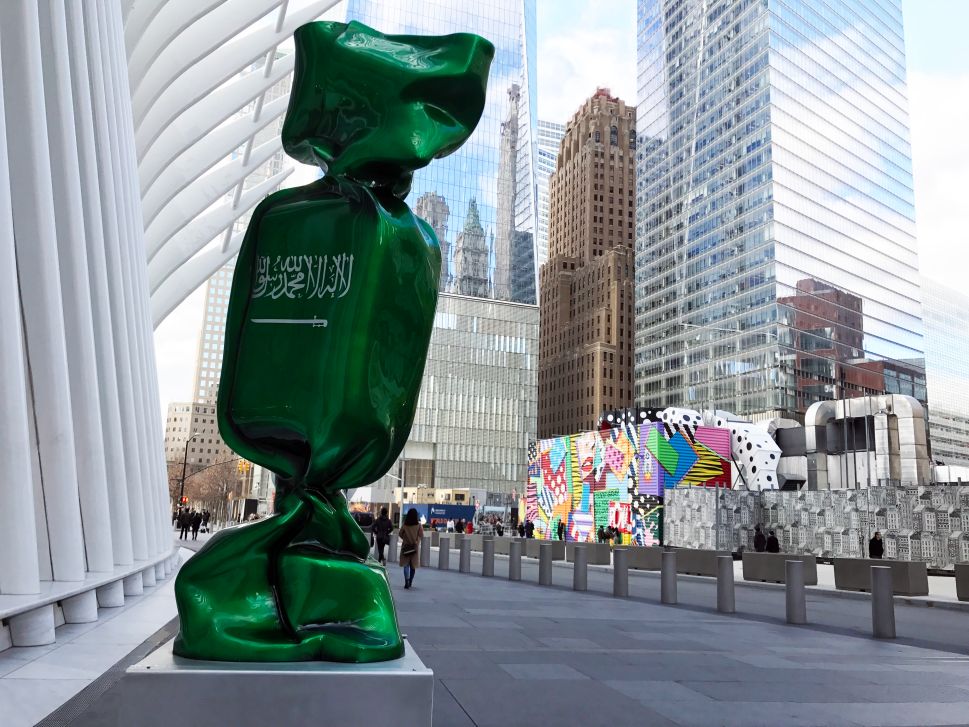