The new year is not even a month old, but a hunk of junk called Serenity already qualifies as the worst film of 2019. Both moronically written and directed with shocking, amateurish ineptitude by Stephen Knight, it’s a pointless bomb about the biggest tuna in the Caribbean and the drunken fishing boat captain who devotes his life to catching it. The result is a sub-mental waste of time and Diane Lane. The early months of every year are always devoted to the trash Hollywood couldn’t dump in the plethora of Oscar contenders the year before. One expects junk in January. It’s a rule. But it is rare to pull any junk movie from the gutter as spectacularly stupid as Serenity.

Matthew McConaughey, who hasn’t appeared in a movie anyone could sit through awake since Dallas Buyers Club, plays a boat captain with the silly name Baker Dill who ekes out a living taking tourists fishing on a boat called Serenity and lives in a cardboard lean-to on an island called Plymouth. It is clear from first sight that he has mental problems. So flat broke that he can’t even afford gasoline, he tells off his customers, pulls a knife on his loyal first mate Duke (Djimon Hounsou), chain-smokes anything he can light with a match, brawls his way through the island bars and drinks himself unconscious every night.

Miraculously, he also has a girlfriend, played by a terminally wasted Diane Lane, who serves no purpose except to provide him with repeated opportunities to show off his rear end in the nude. There isn’t a shred of passion between them. He also has no plumbing, so to take a bath he sometimes goes full monty and jumps off the top of a cliff into the sea to show even more of his gym-pumped torso. Unfortunately, it doesn’t match his ravaged face. He looks embalmed.

Just when you think you can’t bear another minute of monotony, Baker’s ex-wife Karen (an abysmal Anne Hathaway) shows up out of the blue and offers him $10 million if he’ll take her abusive, one-armed billionaire husband Frank out into the middle of the ocean on the Serenity and feed him to the sharks. Years ago, Karen dumped Baker, who she calls “John,” and traded him for money. Now she realizes it was a mistake. Frank, the sadistic, alcoholic brute she married, beats her up regularly, and now she wants freedom for herself and Baker’s 13-year-old son Patrick, whom he has never seen.

Hissing, snarling viciously and punching Karen to a pulp while she calls him Daddy, Jason Clarke plays Frank like an overboiled skit from Saturday Night Live. The skillful Clarke’s descent from a decent Ted Kennedy in Chappaquiddick to a slobbering maniac is a thunderous downfall. Baker wants no part of the scheme, but murder pays better than tuna fishing, and he’s worried about the future of his traumatized son, who spends all of his time in a dark room in Miami dreaming up digital video games to escape reality. Well, what else are you going to do in Florida?

The point where the movie starts to seriously fall apart is the intrusion of another weirdo who interrupts what weakly passes for a plot by pretending to sell Baker a magical “fish finder” that can help him locate the giant tuna he sacrifices everything to catch. This skinny little creep (Jeremy Strong, who played Lee Harvey Oswald in Parkland) wears dark business suits and no shoes, wading through the surf in his bare feet predicting ominous things to come from “the leader,” who turns out to be the teenager in Florida who is manipulating the entire film as part of a digital video game from his darkened bedroom.

As the movie turns into a long, exasperating episode from The Twilight Zone, the dialogue induces giggles and then loud guffaws. “In Plymouth everyone knows everything, except what the fuck is going on.” At the critics’ screening I attended, the audience was reduced to hysterics.

My passion for the beautiful and accomplished Lane was not rewarded in Serenity. Her role is so small, and the whole film would have been much better if she had played the lead instead of Hathaway. With long blonde hair and makeup slathered on with a spatula, Hathaway merely looks hard and trashy. The real star is that dolphin-sized aquarium headliner, who doesn’t even get billing. Don’t bother to see Serenity under any circumstances, but especially if you’re allergic to tuna fish. 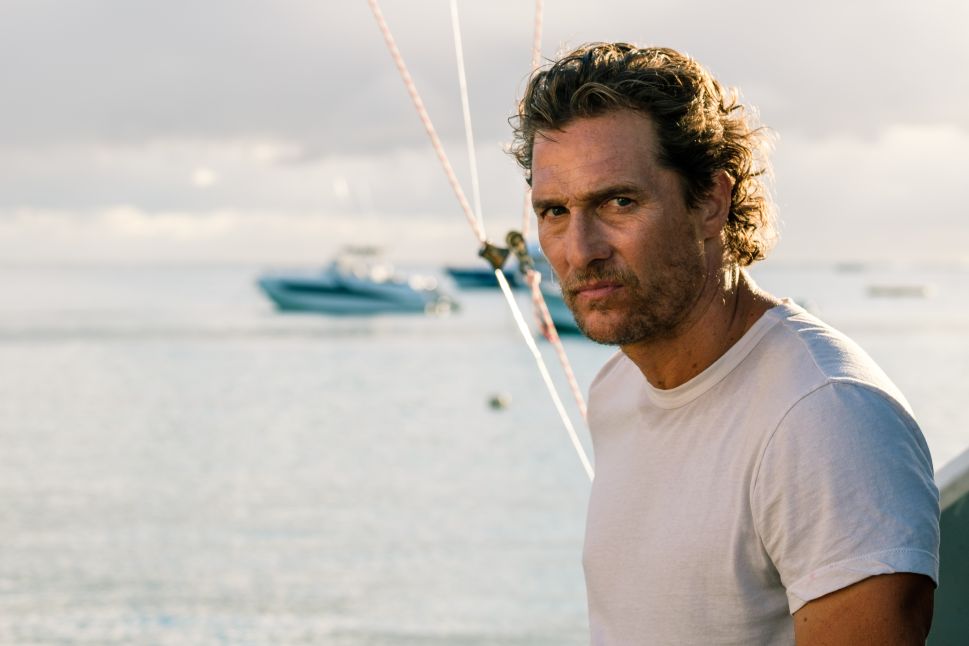