Headlining the Super Bowl halftime show is like hosting the Oscars—it’s a thankless gig (that actually pays even less!) in which the star act gets roasted on Twitter no matter what. Sure, it ups your profile, but at what cost? Katy Perry was upstaged by a poorly coordinated backup dancer in shark costume; that’s like going to see Avengers: Endgame and falling in love with the popcorn clerk. Maroon 5 is expected to lead the way this year, with Travis Scott and a few others likely to join, but there’s one act the people of America seem determined to see: the SpongeBob SquarePants “Sweet Victory” song.

Following the death of SpongeBob SquarePants creator Stephen Hillenburg in November, a Change.org petition titled “Have ‘Sweet Victory’ Performed at the Super Bowl” was launched. Since then, it has garnered more than 1.1 million signatures, or roughly the same number of people that reside in Vermont and Wyoming combined. The people hath spoken!

“As some of you may or may not know, Stephen Hillenburg—the creator of Spongebob Sqaurepants—has passed away recently,” the petition description reads. “As a tribute to his legacy, his contributions to a generation of children, and to truly showcase the greatness of this song, we call for Sweet Victory to be performed at the Halftime Show.”

If you’re unfamiliar with the sacred teachings of SpongeBob SquarePants, allows us a quick explainer: in the season 2 episode “Band Geeks,” SpongeBob’s crotchety neighbor Squidward lies to a high school rival about being the conductor of an elite marching band. Calling his bluff, the old frenemy invites Squidward to have his band play during the halftime show of the Bubble Bowl. Naturally, Squidward’s hasty attempts to cobble together musical talent go awry and hilarity ensues. But when it’s time for the band to actually perform, SpongeBob leads a rousing performance that ’90s kids will likely describe as a religious awakening of sorts.

“Sweet Victory” was originally licensed by APM Music, with president Adam Taylor telling NME, “We are truly thrilled that ‘Sweet Victory,’ a production music song, has crossed over into the mainstream of America’s consciousness, and has become an iconic, ‘Can-Do,’ rock anthem, thanks to the remarkable creativity of the late Stephen Hillenburg and composers David Glen Eisley and Bob Kulick.”

Don’t be foolish, NFL Commissioner Roger Goodell. Give the people what they want. 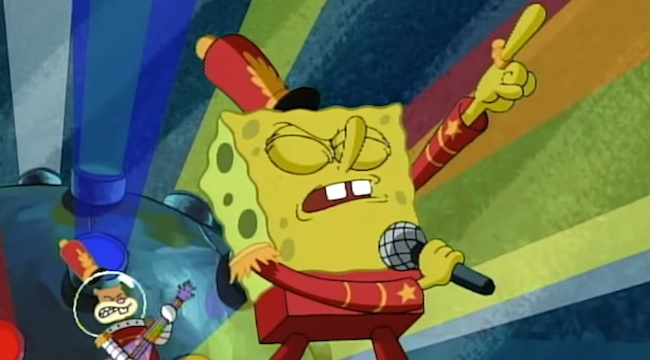