Poignant, funny and irresistibly charming, Stan & Ollie is a memoir about the final days of Stan Laurel and Oliver Hardy, a team of comic sensations in the 1930s whose delicate brand of slapstick is still the stuff of classic retrospectives, TV marathons and ageless art-house programming. If it moves slower than the noisy, vulgar so-called comedies younger audiences have come to expect today, the pace and style are not only deliberate but truly respectful of both the films Laurel and Hardy made famous and the lives and careers of the two men themselves. It is aided immeasurably by the triumphant performances of the two stars, Steve Coogan as Stan and John C. Reilly as Ollie, who manage to avoid caricature while giving 150 percent of themselves from first to final reel.

For the uninitiated, Stan & Ollie meticulously reconstructs many of the songs, dance routines and goofy Laurel and Hardy sketches that kept audiences from 9 to 90 in hysterics for decades (breezily choreographed by choreographer and “director of movement” Toby Sedgwick) and for die-hard fans who know some of the material by heart, the movie brings to life the hearts and minds of skinny, pragmatic Stan and rotund, sentimental Ollie as never before. Actual movie clips pepper the landscape to show the finished result of their teamwork, but the film is more interested in cataloguing the years after 1937, when their fame was at its peak, and starting 16 years later, when their box-office glory was waning.

The action centers on the 1950s, when they came out of retirement and agreed to a tour of Great Britain. It was a harrowing experience. Their status had diminished to the point where they had to carry their own luggage, sleep in cheap hotels, and play second-rate music halls full of empty seats. They got no money from re-runs of their old films on TV, and agents and producers refused to return their calls, but badly in need of money and desperate to work, they humiliated themselves to keep their careers afloat and revive enough of their old value to make a comeback in a movie spoof of Robin Hood that never materialized.

Hardy had a weakness for gambling and girls. Laurel had a drinking problem. They both married several times. But somehow they persevered with a genuine affection for each other that was rare in show business. Dean Martin and Jerry Lewis hated each other. Abbott and Costello weren’t friends offscreen.  Even the Marx Brothers, with actual blood ties, seldom socialized in their personal lives. But Stan and Ollie had genuine love, even when their occasional disputes threatened to split up the act. And they were supported by the unconditional love of two wives who cared for them in different  ways—Laurel’s powerful, domineering fourth wife Ida (Nina Arianda) and Hardy’s soft-spoken, doting third wife Lucille (Shirley Henderson). The movie follows all four of them on a tour that would either destroy them or restore their faith in each other. It did a bit of both.

By the time they reached the London Palladium, the old magic returned. Sold-out houses clamored for tickets. That’s when Ollie suffered a heart attack and ignored the warning of the doctor at the posh Savoy Hotel, hell-bent on finishing the tour in Ireland. Their final dance together, recreating their legendary “Trail of the Lonesome Pine” number, cements their love, respect and interdependence.  Separately, they hardly existed. Together, they were two halves of a whole, unlike anyone else. Nobody could ever bring those two halves together into a seamless construct better than the two stars.

The lines in Steve Coogan’s forehead, the sweetness in John C. Reilly’s smile—neither of them recognizable and both of them so truthful and likable that I forgot I was watching two skillful actors polishing off their  craft—actually turn into Laurel and Hardy with jaw-dropping accuracy. Confidently directed by Jon S. Baird and concisely written without a single extraneous scene or line of dialogue by Jeff Pope, Stan & Ollie is affecting because it shows the human side of comedy, but it’s also sad because it shows greatness in decline.

And their mutual tenderness wasn’t just play acting. After their return to Hollywood, they never worked again. Ollie died in 1957. Stan turned down all offers to team up with other partners until he died in 1965, but kept writing new gags and skits for the two of them to perform together. It’s an exceptional story, filmed with unusual grace, and not to be missed. 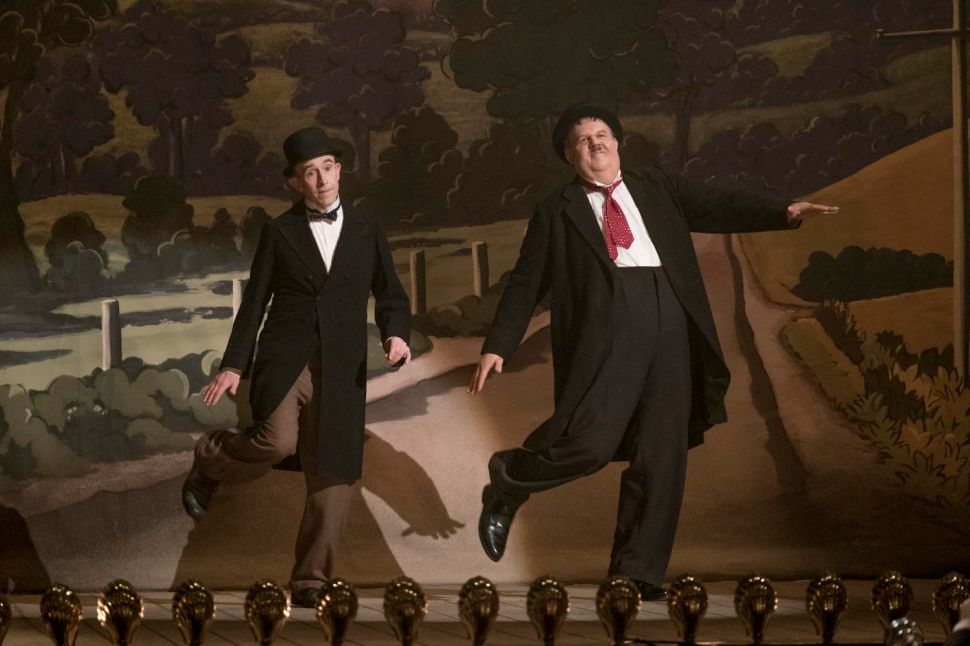