Phillip is a tasteful and cultured art collector, dedicated opera buff, fabulously rich businessman and best-selling author, deeply depressed with no will to live after a stupid, near-fatal paragliding accident during an electrical storm. Dell takes the job as combination assistant-nurse-babysitter to please his parole officer, but when he discovers the astronomical salary and live-in privileges in Phillip’s state-of-the-art penthouse, he determines to make good in order to impress his ex-wife and estranged son, who both consider him a good-for-nothing loser. That is all there is to this contrived odd-couple comedy. It runs two hours and five minutes, which in my opinion is two hours too long.

Director Neil Burger drags out a five-minute joke in the direction of infinity, telling a nothing-story in episodic vignettes and milking every weather-beaten setup of gags that never come to life. Before it crawls to a close, a bizarre and totally unconvincing relationship develops in which Phillip teaches Dell to love Verdi and paint his own canvas of an ugly dog too childish to hang on a kindergarten wall, and then talks a pretentious neighbor into purchasing it for $50,000. Dell enriches Phillip’s existence by introducing him to the finer things of life, such as marijuana, hot dogs and Aretha Franklin. For laughs, there’s a long, queasy, embarrassing scene involving the caretaker’s reluctance to squeeze his boss’ penis in order to insert a catheter.

Described by the participants as “loosely based” on the 2012 French film Les Intouchables, the movie also claims to have roots in a true story, but it’s so preposterous that I found it impossible to believe a single word of it. Hiring Dell makes no sense. Putting up with his insults, delighting in his ignorance of the arts and beaming with approval when he wrecks the penthouse in the middle of a birthday party and smashes bottles of Dom Pérignon all over the glass furniture makes no sense. Hardest to believe is Nicole Kidman, who in the end sheds her glasses, boogies with wild abandon and falls in love with Phillip, now a pothead in a wheelchair.

Silly, sentimental and tedious, The Upside proves what a great actor Bryan Cranston is. Since he’s paralyzed, nothing moves but his mouth, yet he is mesmerizing enough to plow through the entire movie, creating a total character out of nothing but words and facial expressions. Jumping, jerking and bellowing all over the screen, the same cannot be said for Kevin Hart. He may have garnered a few laughs telling homophobic jokes in his old stand-up comedy routine, but when it comes to playing a completely realized character in a full-length film, he’s as funny as a case of shingles. 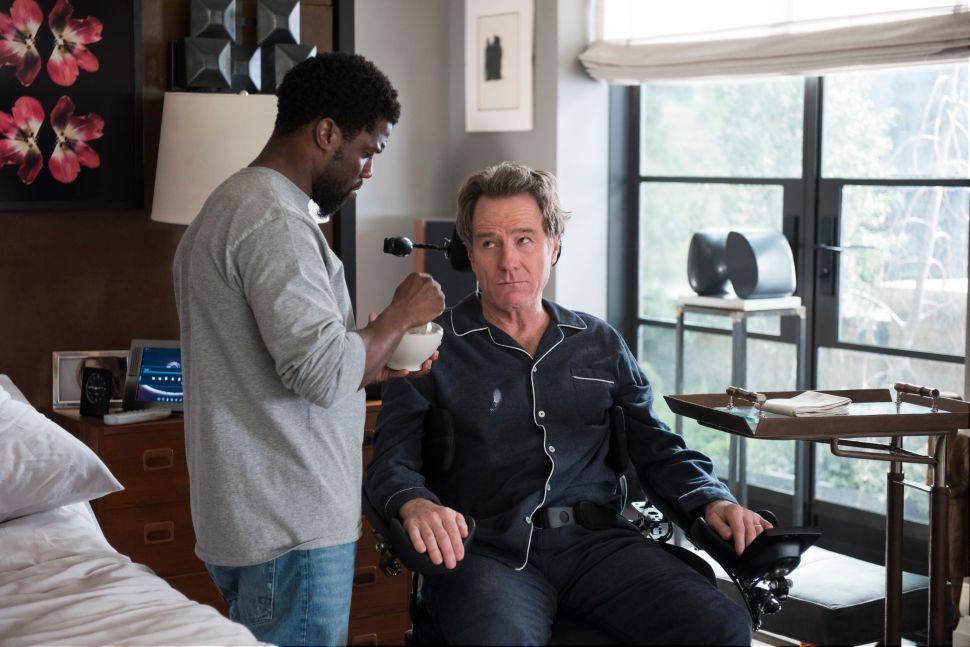