We all understand (don’t we?) that an object depicted in a painting is not the thing itself but a representation of it? It is a trick, one might say, that allows the artist to communicate with a viewer about how something appears in real life.

A trick, anyway, is how Duje Tadin, professor of brain and cognitive sciences at the University of Rochester, describes the work that many artists do, for instance, with swirling streams of color and long or short brushstrokes that offer a sense of movement in what is otherwise a still image. Another important part of the trick is to replicate on the canvas the actions of the human brain.

What he specifically has in mind is the work of Claude Monet (1840-1926), the Impressionist painter, whose series of paintings of London’s Waterloo Bridge are the subject of an exhibition that opened at the university’s Memorial Art Gallery and will now travel to the Worcester Art Museum in Mass., called “Monet’s Waterloo Bridge: Vision and Process.” Over the course of three visits to London between 1899 and 1901, the artist created more than 40 versions of this painting, and the gallery had brought together eight of these, one from its own permanent collection and seven borrowed from other institutions, as a way of describing how Monet’s style of painting mirrors the processes of the brain.

As Tadin explained to Observer, “The eye takes in a lot of small elements of an object, and the brain figures out what all those small elements are—putting all those elements back together to determine the foreground, the background and the meaning—what is this thing?”

Artists in general, and Monet in particular, he claimed, exploit the way the brain perceives the world through the use of rough brushstrokes and small patches of light on an object, so that “we do as viewers what the brain does.” The series of paintings in this exhibition offered members of the academic community and other visitors the opportunity “to think about our own visual system. Monet took one aspect of it and exaggerated it.”

The science behind how the brain perceives objects seen through the eye is a complicated one, involving short and long wavelengths of light that are inverted and processed by the retina, then sent on to the visual cortext, which passes them to the parts of the brain that contain memory. “People assume that vision works like a camera,” Tadin said, but all of this behind-the-scenes activity takes place automatically and instantaneously, so that we are not aware that visual sensations are being interpreted rather than just understood.

“We take vision for granted, because we are looking at objects all the time, but it actually is a very complex system,” said Woon Ju Park, a research associated in the department of psychology at the University of Washington in Seattle and a former assistant of Duje Tadin. Memory and experience are essential to the process, because “if you don’t have experience seeing a bridge, you won’t understand that the blue is in Waterloo Bridge.” Objectivity may be illusory if different people perceive the same images differently, in the way that the color of a dress was the subject of considerable debate several years ago on social media.

In effect, she claimed, the painting “tricks the brain into seeing what Monet observed when the objects are not really there. Monet exploited the way the brain perceives objects, breaking down an image into small spaces through brushstrokes.”

Monet’s stippling and later artists’ use of pointillism make the exhibition’s point particularly clear but, Tadin said, the use of color and shapes have been used by many other painters in ways that approximate what the brain does. He noted Piet Mondrian’s painting Broadway Boogie-Woogie as using colors to “trick the emotional system to see movement in a stagnant image.”

Tadin noted that the theme of the exhibition was not based on any new research by the university’s Center for Visual Sciences, of which he is director of training, but a way to look at both art and science. “Artists and scientists are involved in discovery, and artists and scientists often come to the same conclusions,” he said. 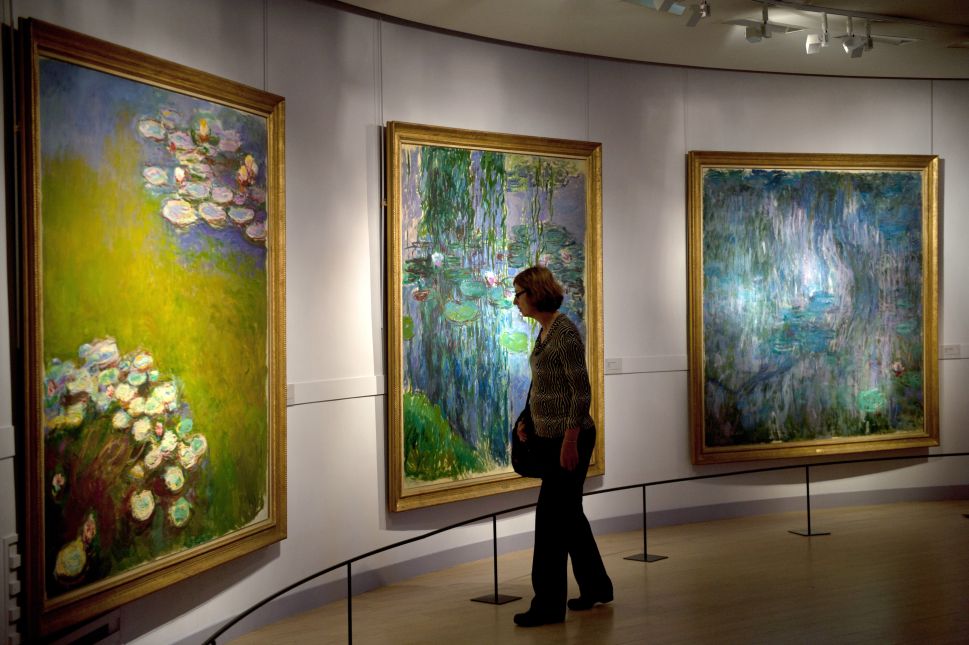