President Donald Trump’s decision to order a heavy helping of McDonald’s hamburgers earlier this week may have been borne from necessity.

According to Bloomberg, over half the White House staff have been furloughed due to the government shutdown—only 21 of the roughly 80 employees responsible for maintaining the premises continue to show up to work. While the president still enjoys his own private chef and butler (both paid by the government), other extravagances have been cut.

The White House was recently thrown into chaos when a cluster of Republican congressmen stopped by for lunch. Due to the lack of a catering staff—the White House normally employs 5 full-time chefs—cooking responsibilities “fell to the Navy-run ‘mess’ in the basement,” per Bloomberg.

The shutdown has also gutted the first lady’s East Wing staff: Only five of 11 aides are currently reporting to work. With no clear indication on when the shutdown will end, the future of social gatherings like March’s St. Patrick’s Day festivities and the annual Easter Egg Roll have been thrown into question.

“Since the shutdown began, Trump has put off travel to his Mar-a-Lago estate in Palm Beach, Florida, where he typically gets in daily rounds of golf and catches up with old friends,” wrote Bloomberg. “He’s scrapped his usual pattern of spending Christmas and New Year’s at the resort, where he spends many weekends during the winter and hosts an annual Super Bowl bash.”

In a statement to reporters, the White House asserted that Trump paid for the Clemson Tigers fast food feast (pictured above) on Monday evening himself. Although the president boasted of ordering 1,000 hamburgers over Twitter, the number was closer to 300.

Great being with the National Champion Clemson Tigers last night at the White House. Because of the Shutdown I served them massive amounts of Fast Food (I paid), over 1000 hamburgers etc. Within one hour, it was all gone. Great guys and big eaters! 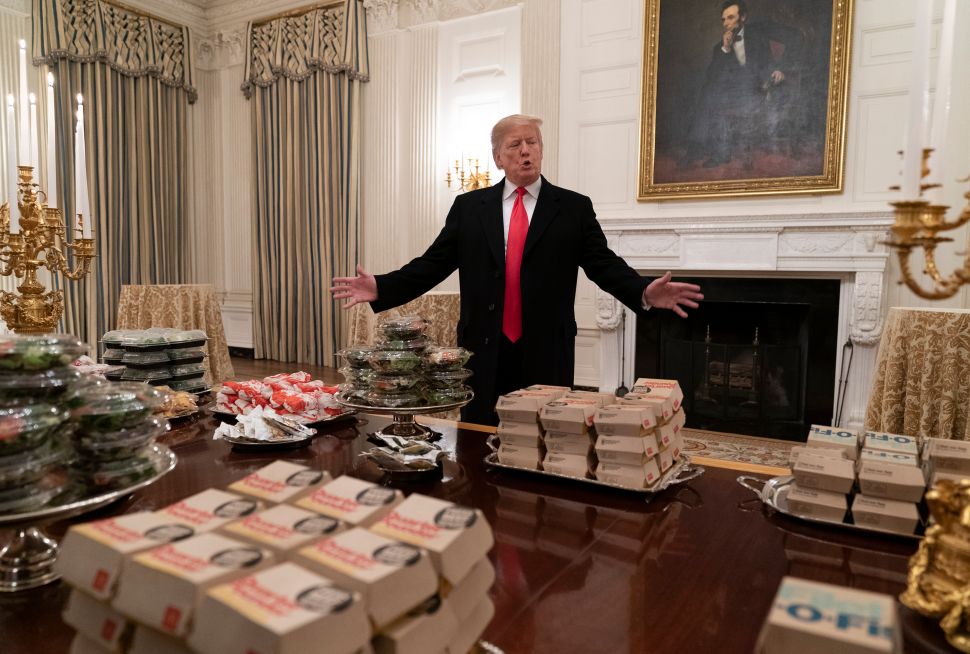