The damage done by Donald Trump’s record-breaking shutdown will be felt long after the president’s name is relegated to an answer in futuristic bar trivia and long, long after the posturing, suffering and chaos of the last 40 days is replaced in our psyches by the latest fresh hell. Considering that the Yucca trees vandalized in Joshua Tree National Park may require centuries to recover, it is possible that the toll of Donald Trump’s shutdown may outlast the republic. But Trump has also done himself, the Republican Party, and the conservative movement permanent damage: He gave the country an irrefutable demonstration in the value—no, the indispensability—of government.

Scholars and Twitter users will disagree, but insofar as American politics can be broken down into an us-them dynamic, the philosophical divide separating the two bands of partisans is government. Scratch a conservative (or just have them answer a poll) and there is a good chance they will tell you that government stinks and they want less of it. After all, some of the greatest victories for liberals in the last half-century, like the Civil Rights movement and the passage of Obamacare, required government intervention. Forget for a second the mental gymnastics required for someone to declare themselves simultaneously an enemy of government and a bosom friend of the military and the police—the literal state agents of government power—and that it is extraordinarily silly to yell BLUE LIVES MATTER while decrying taxes (which pay cops’ salaries and pensions).

These are the “core Republican values” that predate the current president, the sanctuary to which NeverTrumpers will retreat in their time of need. “In the present crisis,” Ronald Reagan said in the early 1980s, “government is not the solution to our problem; government is the problem.” Reagan was referring specifically to the recession—a temporary crisis to which he reacted by slashing government housing programs, the triggering event that made previously cyclical homelessness permanent—but he may as well have been giving the Sermon the Mount, as those words have been solemnly repeated by generations of conservatives like a mantra ever since.

Acting very much like a man who has a fantasy painting of himself playing pool with Ronald Reagan hanging in the White House, Trump has so far held true to this value. As Michael Lewis documented in The Fifth Risk, Trump’s general reaction to being handed the keys to the federal government—a bureaucracy that is massive because it is tasked with massive responsibilities, without which planes would drop out of the sky, the food on grocery store shelves would pose a mortal threat, and anyone from terrorists to hobbyists could acquire a nuclear weapon—was to immediately lose the keys. He didn’t care what government did and didn’t bother learning. By last spring, 500 days in office, hundreds of key positions, in the State Department, in Homeland Security, in the Department of Defense, were all unfilled.

That is bad and will continue to be. But ensuring that there are no diplomats and the government has no watchdogs creates chaos that you can deny, or at least delay until you’re far enough away. Since most federal workers earn about $500 a week and since most Americans have less than $400 in emergency savings, putting all of these people temporarily out of work so that Congress will fund an enormous, frivolous and inherently racist public-works project has a much clearer cause and effect relationship. The shutdown meant federal prison guards worked double shifts without pay. Border Patrol agents and trainees were sent scurrying to banks to beg for temporary loans. Law-enforcement agents lost confidential sources, investigations were shut down. Criminals went free, because the government was not there to catch them.

Now, cops, prison guards and border agents all tend to be conservative. How many conservatives are there elsewhere in the 800,000-person strong federal workforce, some of whom stood in line for meals at food banks like it was the Depression, because of Donald Trump? We don’t know for certain, but there were a few. And they absolutely realize that Donald Trump was OK with them living in penury—like liberal bums, begging for a government handout!—for political gain.

And in so doing, Trump revealed the profound value of the U.S. government. Without it, the country does not work. It may be large and clunky and parts of it may be bloated and even corrupt. Those are all descriptions that fit any large institution. It is also absolutely vital—without it, things turn to shit awfully quickly.

Without government, national parks were trashed or closed off, the Coast Guard went unpaid, and educated and employed Americans queued for food. Few beyond the pundit class, totally insulated from most of these slings and arrows, want that. And once they find out they can’t fly between Manhattan and D.C. for the latest paid speaking gig on time without government, they don’t want it, either.

The Trump shutdown was a colossal failure, tactically and strategically, for both Donald Trump—who failed, who gave up, who fell apart like a greasy McDonald’s bag floating in a Manhattan puddle—and dearly held conservative values. This is why top GOP leadership are crafting a bill to make sure federal workers get paid the next time this happens. Which could be Feb. 15. 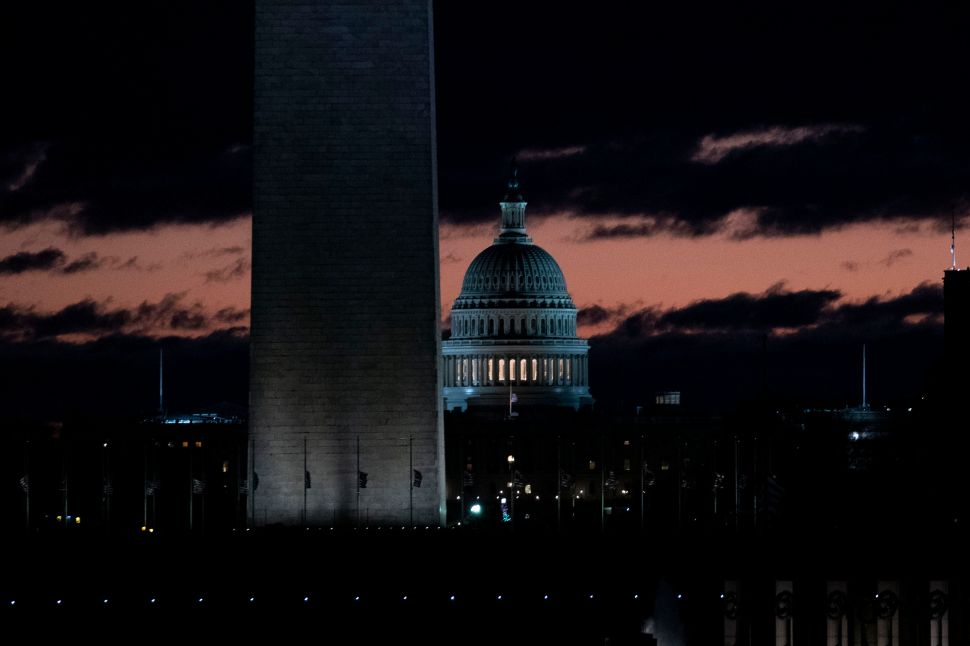