Staffers of museums situated in the shadow of Trump’s White House are finding out just how far the president will go to prove a point. The “prior-year funds” used by the Smithsonian National Museum of Natural History and the “unexpired two-year and no-year appropriations” tapped by the National Gallery of Art to keep the respective museums open in the midst of the government shutdown have, as scheduled, run out.

This means that both Washington, D.C. institutions, as well as the National Zoo, are closed for the foreseeable future; in other words, until the government shutdown is resolved and federal funding will once again be readily accessible.

This latest development has turned the usually bustling National Mall into something closer to resembling a newfangled ghost town.

In addition to the Gallery, the Smithsonian and the zoo, the Hirshhorn Museum and Sculpture Garden, the National Air and Space Museum, the National Museum of the American Indian in both D.C. and New York, the National Archives facilities and the NYC Cooper Hewitt Smithsonian Design Museum have all gone dark.

In disrupting the promotion of many artists whose work was being shown in these D.C. museums for limited times only, the partial government shutdown has also resulted in the furloughing of every federal employee currently working at the aforementioned locations (and all other shuttered organizations across the country).

The consequences of the shutdown have thus inspired dismay from artists and furloughed employees alike, who know that their livelihoods are currently completely at the mercy of the executive branch.

Shutdown is now hitting us at Smithsonian Observatory. Federal staff furloughed and forbidden to travel to the American Astronomical Society meeting next week. Trust fund employees like me (untenured, paid out of contracts from NASA) still ok for now

The collections manager of the department of entomology at the Museum of Natural History tried to put it all in perspective.

Due to the #GovernmentShutdown, Smithsonian museums & the National Zoo are closed. Even in our disappointment that we have to close temporarily due to a lapse in federal funding, there is an opportunity to smile. pic.twitter.com/AJMHQBFPGK

because of the gov. shutdown the giant panda livestream at the Smithsonian National Zoo is down so thanks again government you’ve ruined my life once again

New York City-based critic Phyllis Tuchman has launched a project on Instagram to draw attention to what’s lost when artistic venues shut their doors, even temporarily. “For the duration of the gov’t shut down, I’ll post a great artwork from an affected institution,” Tuchman wrote yesterday. The first image she posted was a snapshot of Manet’s The Old Musician (1962), which currently resides in the shuttered National Gallery of Art.

The shutdown, which as of Thursday became the fourth longest in the history of the United States, hinges upon President Trump’s insistence on receiving $5 billion in funding for his planned border wall between the southernmost coast of America and Mexico. Democrats have categorically refused to acquiesce to Trump’s demand (thus far), resulting in the deadlock. Congressional leaders will meet again with the president on Friday to continue negotiations.

“As a Mexican, it’s ironic that the shutdown happens because of Trump’s insistence on building an unnecessary wall—one which according to his promises was going to be paid for by Mexicans,” Mexican-Canadian artist Rafael Lozano-Hemmer told Artnews. “I look forward to the end of the shutdown and hope my exhibition can ‘build bridges’ between our countries.”

Remember a couple of years back, when people wouldn’t stop talking about how the Trump presidency was inspiring a new generation of protest artists? It’s probably now fair to say that anyone who still considers Trump even an unintentional patron of the arts should go ahead and eat a paintbrush. 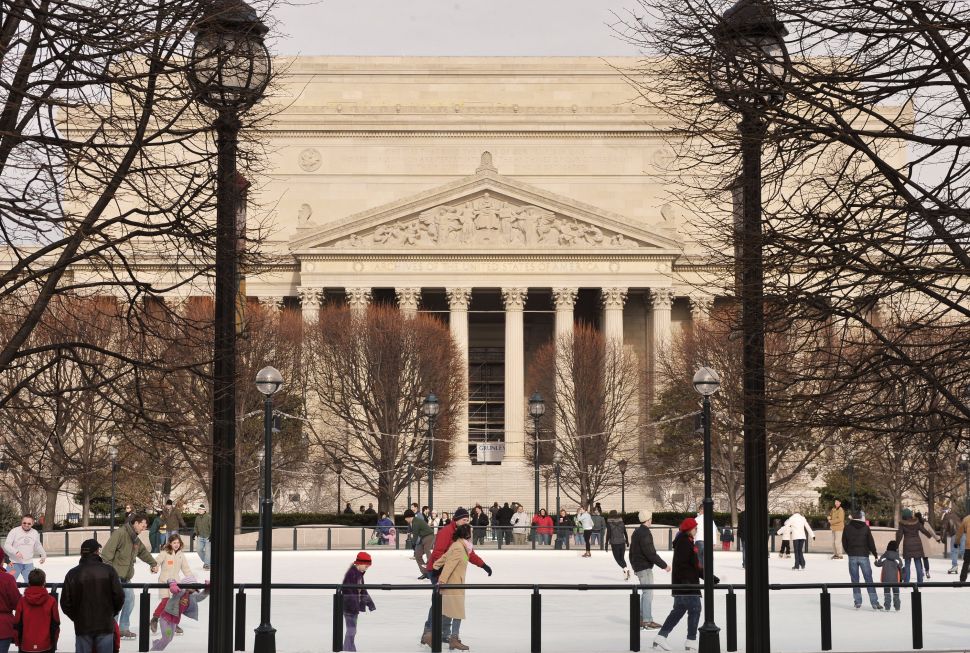