If we looked only to the art market to determine merit, it would tell us male painters are the best painters. Men made all the art on the top ten list of most expensive artworks. Jeff Koons, Andy Warhol and Gerhard Richter are the art market’s biggest stars.

A trip to Chelsea this month, though, makes clear that the best painters of the 21st century are women. Take the phenomenal Dana Schutz exhibition, “Imagine Me and You” at Petzel right now, which consists of 11 paintings and five bronze sculptures. Schutz depicts the psychological state of her subjects by placing them in insane and often hilarious scenarios. For example, in Presenter, a figure holding a slide clicker has her underwear at her feet. She cannot speak because a giant detached hand has pulled her lower lip out to the point where she can’t talk. The painting’s strangely relatable; everyone’s had some version of this dream.

Boatman is a little more ambiguous. In it, a small gray-faced man who looks like he might be dead sits on the lap of a large man rowing a boat. What’s going on? Is the boatman a Charon, porting the souls of the dead down the river Styx? Is the little guy showing off his boatman? There are probably twenty interpretations of this painting, and all of them would be right.

Beyond intellectual curiosity, though, the painting would succeed on skill alone. The green lake set against the smaller figure’s red pants pops off the wall. It’s dazzling, and welcome comeback since the Whitney Biennial, in which her painting Open Casket was labeled by many as a racist. It was the subject of ongoing debate for months.

Schutz is just one of many female painters worthy of viewing in Chelsea this month. Figuration fills many galleries, but the queen of all, may be painter Joan Semmel. Known for her nude self-portraits, at 86, she’s as innovative with paint as ever, a quality on view at her show at Alexander Gray Associates. In some works, her thin light brushwork creates the impression of skin rubbed raw. In others, it’s merely a matter of overlaying the paint in surprising ways—a swoosh of blue in an unexpected area or the outline of a figure rather than something more fleshed out. The most substantial piece in the show seems almost banal at first. In Seated in Red, Semmel depicts herself, hunched over from behind. It’s rendered plainly from the bottom, but as the viewer’s eyes travel up her back, the skin becomes more haggard and worn. By contrast, the brushwork takes on a more urgent flavor, to the point that her hair at the top of the painting is just a flurry squiggles. As a whole, the show seems to indicate Semmel’s got many good years ahead of her—she leaves more energy than the average 30-year-old on the canvas.

Painters don’t retire. Just as Semmel continues to work well into her 80’s, Brenda Goodman, 76, delivers a show-stopping exhibition of new paintings at Sikkema Jenkins & Co. These abstract works meticulously render a mix of loose geometric abstraction and vaguely figurative forms. For instance, in Dance, Goodman uses a swooping plant-like shape and decorates the thickened part of the stem with a multicolored mosaic that buds a bizarre flesh-like sheet of skin and blackened nose. It’s strange and inventive, and fun to look at for those reasons.

Over at Jack Shainman, Lynette Yiadom-Boakye shows us why she was shortlisted for a Turner Prize. For this show, which spans two of Shainman’s locations, she skillfully uses a restrained palette and economic brushwork to render black figures. Her darks create a kind of psychological depth while she applies whites with the skill and confidence of a Dutch master.

For an equally skilled, but entirely different experience, Claudia Comte at Gladstone serves up a show of black, white and rainbow gradient op-art installations. Approaching op-art with a degree of skepticism is generally a good idea. Producing art that looks good is easy, and requires a formulaic approach, thus miring the entire field in cliché. But Comte’s rhythm is so precise the viewing experience feels like looking at music. There’s nothing cliché about it.

It’s a fantastic show, and worth spending some time with if for no other reason than as a reminder that women painters are killing it. More than that, though, I like to think that the sheer volume of great painting by women on view this month is cosmic fate. Down the street at Gagosian, Georg Baselitz, an artist best known for his belief that women painters are inferior to male painters, has a show of his trademark upside-down busts. Baselitz packed the space with far too many paintings that all look the same. He sticks his heads in the middle of the canvas, giving little to no thought about composition and then moves a bunch of paint splooges around to form the figure. The show serves a useful purpose though. It’s the perfect measure of how little Baselitz has to offer, and how much more the best contemporary women painters bring to the table. 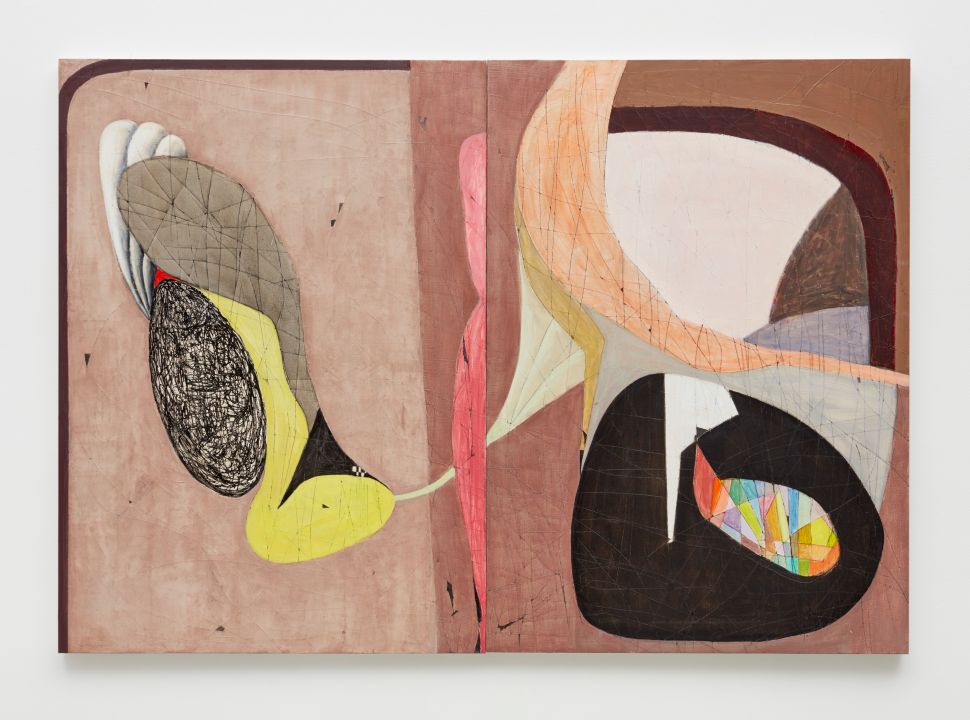