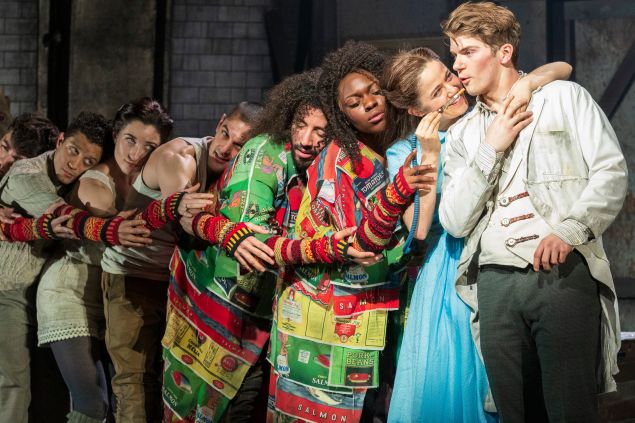 The cast of Alice By Heart. Deen Van Meer

Composer Duncan Sheik and lyricist Steven Sater broke my heart with Spring Awakening, and they’re doing it again. Just not in the same way. Alice By Heart shares obvious traits with the team’s earlier work of theater, which became well known when it transferred to Broadway and won the 2007 Tony for Best Musical (yours truly wrote a book about its creation). Spring and Alice both follow teens in angsty love fighting odious adult supervision under the shadow of death. For each, the team crafted a rich, haunting score: raw, bruised ballads of longing and losing. Years before that other alliterative duo Pasek and Paul exploited high-school anomie for Dear Evan Hansen, Sheik and Sater mastered the sighing snarl of brooding youth. But Alice By Heart fumbles the formula; several of the tracks are quite swoon-worthy, but the framing concept left me cold and confused.

The difference: Spring Awakening was a straightforward adaptation of playwright Frank Wedekind’s satirical-tragical portrait of hormonal adolescents and hypocritical adults in 19th-century Germany. Sater pared down the text and added his tender, sensual lyrics. Sheik brought his ruminative but groove-smart talent to the table. The result was a potent collision of signifiers—teen rebellion that transcended historical period through emo rock. Alice By Heart is a more muddled concoction, tangled up in too many layers of reality and fantasy, trauma and whimsy, to deliver its emotional payload.

We are in a tube station in the London Underground, a makeshift hospital/refuge during the Blitz. A bossy Red Cross Nurse (Grace McLean) and the crusty, fusty Dr. Butridge (Andrew Kober) seem to be the only adults in charge of a group of shaken, terrified kids. These include, principally, Alice Spencer (Molly Gordon) and her childhood friend, Alfred Hallam (Colton Ryan), who is sick with tuberculosis. To while away the time and distract themselves from the horror raining down from above, Alice invites Alfred to retreat into their favorite book, Lewis Carroll’s 1865 fanciful classic of a white rabbit, hookah-smoking caterpillar and the Cheshire Cat. Alice loves it so much she has it memorized. Will each of the characters in the tube station transform into iconic Wonderland counterparts? You may be ahead of the piece. 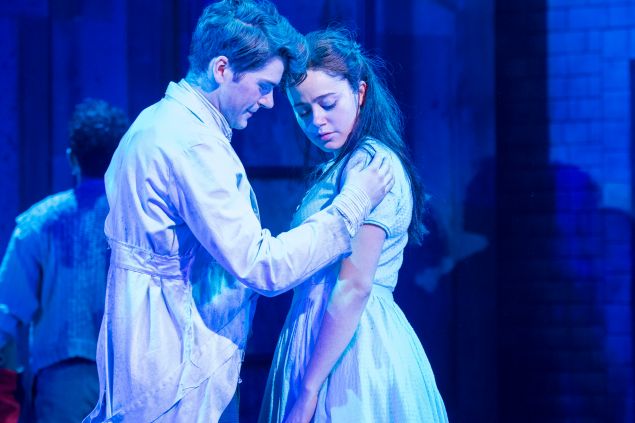 On paper, it could work. Alice loves Alfred—more than as a friend—but he keeps pushing her away, knowing his time on earth is short. She Scheherazades him with the book, as a kind of desperate seduction and hopeless cure. Through the magic of theater, the war-torn, subterranean space is transformed into a lovelorn girl’s version of Wonderland. Rifles become extensions of the Jabberwock’s limbs; a platoon of steel Brodie helmets, tipped flat toward the audience, morph into the Mock Turtle’s shell. Alfred is the White Rabbit, forever rushing off with Alice in pursuit. The Mad Hatter (Wesley Taylor) is a vet with PTSD.

Such PG-13 translations of the Carroll can be naughty fun, but once we’ve gone down that rabbit hole, it’s hard to keep the stakes straight or feel any real bond with the characters. After all, we’re watching a doomy Y.A. romance, wrapped in Lewis Carroll fanfic, set during World War II, and told through the idiom of indie-rock musical. That’s a super-narrow taste niche, and I don’t know how far it extends beyond the creative team. Unless the book (co-written by Sater and director Jessie Nelson) can establish rich and evolving characters (and not just the leads), it’s all just metafictional vamping between songs. 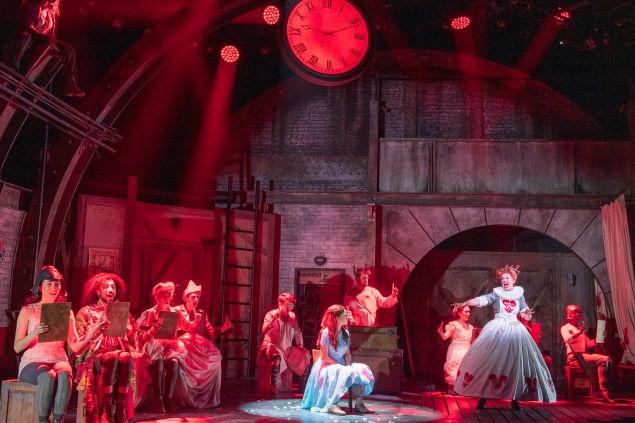 And those numbers, many of which are stirring, do little to advance plot or deepen character. They’re mood pieces, mock-pop. It worked for Spring Awakening, where the narrative machinery clicked along. Here, the hectic and whimsical Carroll remix is already stylized like mad, so the songs are superfluous interludes of escapism within a framework of escapism. Many I’d be happy to hear again in concert: the forget-me-not duet “Another Room in Your Head,” the gauzy, sexy “Afternoon,” and the coming-of-age meditation, “Winter Blooms.” Having come out of her Carrollian fantasia, the grieving, wiser Alice realizes, “There are rooms you leave behind, / Other wounds of other times. / Other songs fill your mind. / Rabbits lead you for a while, / Picture books, / a Cheshire smile; / Summer drifts, like a child.”

When Molly Gordon’s Alice—vivacious, defiant, hungry for the spice of life—sings such delicate material, you fall for it. Gordon’s a bright, appealing performer who has done film (the Melissa McCarthy comedy Life of the Party) and this is her biggest stage credit to date. She has to carry much of the show, and works hard to make Alice cohere as a romantic heroine, but it’s tough going. Although staged, story-theater style, with inspired tableaux and choreography, Sater and Nelson’s concept is too static and circular, leaving us—and Alice—no one to credibly save, no dream from which to wake. I think the creative team means to rouse our imaginations, but the effect is perversely soporific—which is where the real Alice started. 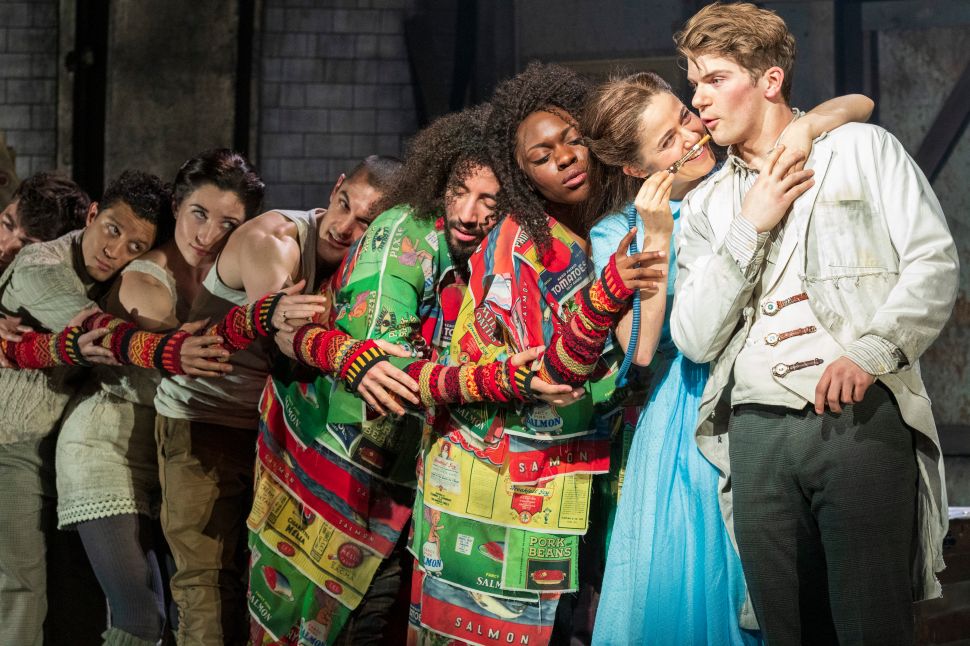