Much like a weather system, every winter a mass of art fairs descend on New York City. Short in duration but intense in activity, the five major ones offer more art than viewers would be able to see at the city’s five largest museums. But what’s extraordinary about New York’s fair week, over all others, is the quality of the events themselves. Given the volume of work on view, though, it’s good to head into it all knowing what you’re looking for. Here are Observer’s tips on tackling each one, including what type of art to expect and what the biggest draws are this year. They start today.

Art Dealers Association of America doesn’t just let anyone into their club. Dealers need to demonstrate that their gallery upholds superior business and academic standards. It’s for this reason that their intimate annual members show—the ADAA Art Show—is so anticipated. As a group, these galleries are known for securing the best artworks by some of the world’s best artists—both new and old. It’s a really good fair.

The preview gala gives collectors the chance to secure their choice of art, but for those simply looking to get acquainted with new work, Sunday may be the day to visit. From 12 to 3 p.m. attendees will have a chance to chat with the artists whose work is on view. No specific names have been listed as participants, but Seth Price has a solo booth of assemblages at Petzel Gallery and it would be a boon to visitors to find him there. Price authored the 2002 essay “Dispersion,” which argued that distribution, rather than production, is the primary way works acquire meaning. The article is still taught in classrooms today.

Now in its tenth year, this fair strives to be less of a sales floor and more of an experience. To achieve this, Spring/Break invites curators, not galleries, to submit proposals around a pre-determined theme, and sales occur only through their website. This year’s theme, fact and fiction, feels timely. Keywords provided by the fair include self-mythology, cultural conspiracy, propaganda, appropriation, psychedelia, the occult, religion, pseudoscientific and pseudohistorical. Spring/Break tends to be most Instagram friendly of all fairs.

The Armory Show will look a little different this year. Just over a week before the fair was due to open, a city inspection revealed that one of two of the piers that traditionally hosts the event was structurally unsound. So, they’ve canceled VOLTA, an art fair run by the same entity on pier 90, and moved one-third of its 194 exhibitors there. Shuttle buses will be provided, but this means the high-profile fair will be unusually difficult to navigate this year.

Perhaps the exhibition with the most historical value, though, will be the restaging of Robert Morris’s Finch College Project (a convoluted installation, explained well by MIT) from 1969 at Castelli Gallery. That too will take place on Pier 94.

Of all the events listed here, Independent’s open fair concept might produce the most pleasurable art viewing experience and attract the strongest contemporary art. Dealers don’t exhibit art in the standard format booths, but on the pre-existing walls and freestanding supports. Nothing feels cramped. No panel discussions. No special fair sections. No frills. Just a lot of gorgeous art.

This year the New Art Dealers Association won’t be hosting their usual art fair. After canceling the 2019 edition last summer, they worked to coordinate an exhibition and event schedule with Collecteurs for participating New York galleries (and out-of-towners who wished to participate in exhibition space shares.) Nina Katchatourian’s On-Hold Music Dance Party, Thursday, March 7 at Fridman Gallery, promises the strangest and possibly the most fun experience. For this event, she recorded music played while placed on hold and collaborated with Julie Covello (Dj Shakey) and Gabriel Willow (DJ Stylus) to sample, loop, chop and mix the tunes. Friday, galleries will hold extended hours for viewers—Foxy Production, Company, Larrie, Kerry Schuss and ProxyCo all have openings. 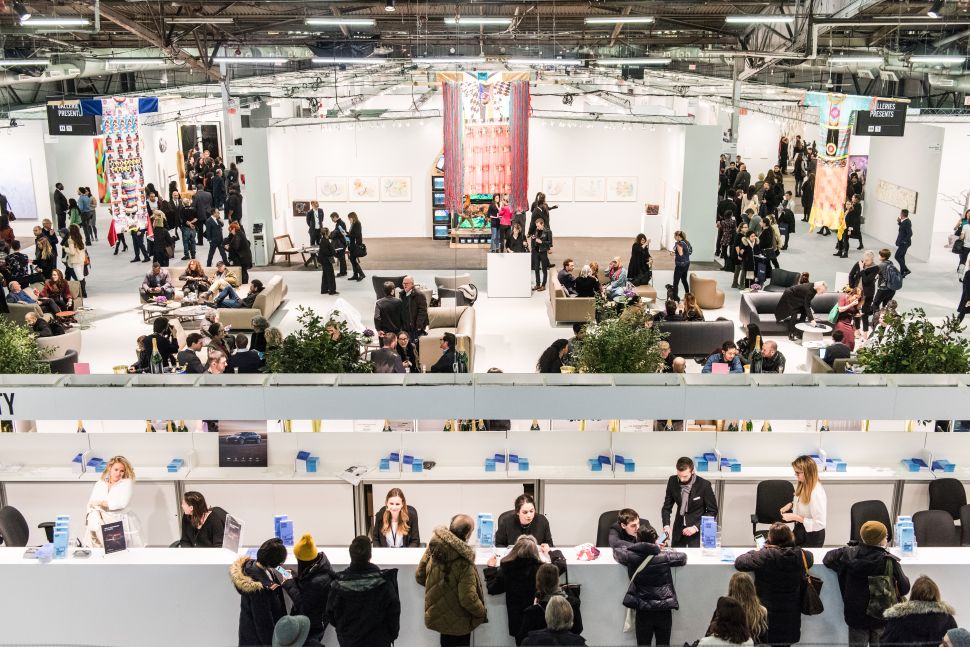