Ever since Art Dubai was founded in 2007, gallerists, collectors and the cognoscenti have packed their bags and made the trek to the United Arab Emirates for the annual four-day event. It might not be as famous as Frieze and Basel, but it’s still a major stop on the art circuit.

Before you hop on the lengthy flight to the always-glamorous city for the festivities—which take place from March 20 through March 23 at the Madinat Jumeirah—you’re going to need the right accommodations. Luckily, we’ve found the best, most decadent, most aesthetically daring spots to leave you feeling pampered and inspired.

Art Dubai takes place at Madinat Jumeirah, which is made up of four different hotels, including the Jumeirah Al Qasr, so book a spot here and you’ll have a bit more time to dress for the occasion. The stay just received a renovation, which was unveiled in January. All of its 294 rooms (many of which flaunt views of the famous Burj Al Arab, one of the tallest hotels in the world) have been refurnished in a traditional Arabic style, with a newly contemporary edge and a navy, white and orange color scheme.

Jumeirah Al Qasr was designed in the aesthetic of a sheikh’s summer residence and boasts its own private beach and the largest acclimatized swimming pool in all of Dubai. With rates starting at $326 a night, it offers six restaurants as well as the Talise Spa, which has 26 treatment rooms, an infrared sauna, steam rooms, plunge pools and a private yoga studio. Jumeirah Al Qasr.

As you likely inferred, the Waldorf Astoria Dubai Palm, which opened in March 2014, is located on Palm Jumeirah, a manmade, palm-tree–shaped island right off the shore. It’s about a 20-minute car ride to the Madinat Jumeirah, but that’s not bad for Dubai, especially if you’re looking for glitz. The hotel is composed of 319 guest rooms, which start at $326 and offer contemporary furnishings and an ivory, sand and turquoise color palette. There are six restaurants and lounges, two pools, and a spa with 12 treatment rooms and 50 different services for when you get tired of interpreting all that gorgeous art. And not to worry: Even though it’s on an island, you’ll have easy access to a multitude of hotels, boutiques and dining spots. Waldorf Astoria Dubai.

We’ll just say it: We prefer the beach hotels in Dubai. However, if you want a happy medium between one of them and a primo pad in the heart of the city, book a stay at the five-star Conrad Dubai, which opened in late 2013. Much like the rest of the high-rise-style hotel, its 555 contemporary guest rooms, which start at $230 a night, are on the more modern side, with dark wood and beige furnishings as well as gold accents. It has two restaurants and a wine bar in addition to a spa, a fitness center and an outdoor pool.

Similar to all the Conrads, this one offers the 1-3-5 service, in which the staff will curate personal experiences for guests spanning one, three or five hours. So even if you only have a limited time outside of Art Dubai, you can arrange a visit to a show at La Perle, plan a culinary adventure or stop by the famous skyscraper Burj Khalifa, the tallest structure in the world. Conrad Dubai.

The beachfront Residence & Spa at the One&Only Royal Mirage Dubai is made up of just 28 rooms and 28 suites, but it occupies a sizable 65-acre space. The rooms in the Leading Hotels of the World hotel—which start at $949 during the art event—are bedecked in luxe silk fabrics, with curved arches and mosaic details. Guests can enjoy the spa (natch), any of the six restaurants, a beach and a pool deck with private gazebos surrounded by palm trees and fountains. Even better, it’s just a seven-minute car ride to Art Dubai. One&Only Royal Mirage Dubai.

Palazzo Versace brings a little Italia to Dubai. Located right on the Jaddaf Waterfront (about 20 minutes from Art Dubai), the opulent Preferred Hotels member features a $1.5 million hand-cut mosaic floor, gilded columns and Versace Home furnishings in all of its 215 rooms and suites, which are decked out with silk upholstering and parquet floors (rates start at $300 a night). You’ll find eight restaurants and bars, including Enigma, helmed by a Michelin-starred chef. There’s also a spa, so you’ll want to make use of the seven treatment rooms, nail studio, plunge pools, steam rooms, saunas and two Moroccan hammams. Palazzo Versace. 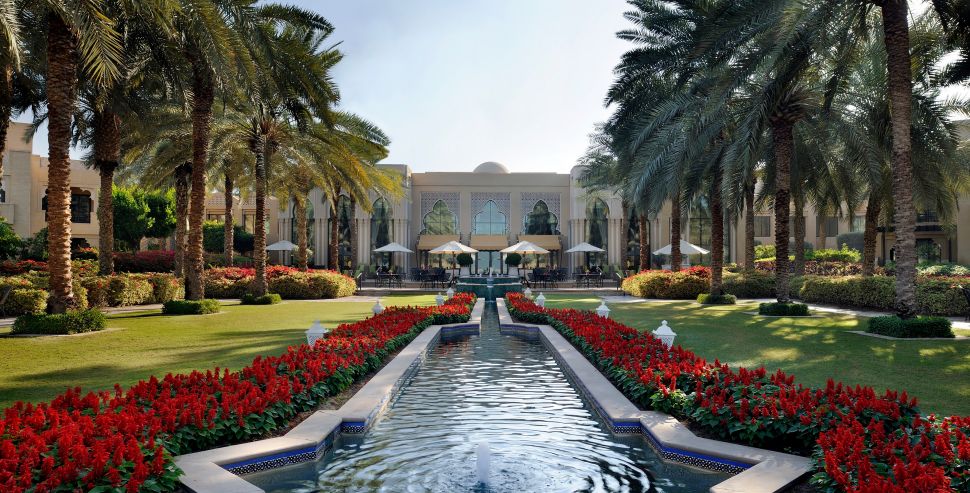