Venezuela’s political turmoil looms ominously over presidential hopeful Bernie Sanders. Throughout the Trump era, Sanders’ strand of Democratic Socialism has been mischaracterized by many on the right who compare calls for affordable healthcare to a regime which starves its own people. The Vermont senator this week felt Venezuela’s grip tighten over his 2020 prospects, with Republican and Democratic lawmakers criticizing his refusal to label the country’s president, Nicolás Maduro, a dictator.

“Dictatorship is dictatorship whether from the right or left,” Senate Foreign Relations Committee Chairman Bob Menendez (D-N.J.) told CNN on Tuesday after Sanders refused to make the comparison during a town hall the night prior. “Dictatorship oppresses their people. I’m really surprised that Sen. Sanders could not at least call him a dictator.”

The senator weathered a similar news storm last Tuesday, after refusing to call Maduro a dictator during an interview with Univision Host Jorge Ramos. A handful of Florida Democratic representatives immediately denounced Sanders, with Congresswoman Donna Shalala (D-Fla.) going so far as to tell POLITICO, “He is not going to be the nominee of the Democratic Party.”

I’ll make it clear, @SenSanders does not reflect the majority of the Democratic Party and our support for Venezuela’s interim president @jguaido and the Venezuelan people. Maduro is a dictator and must go. https://t.co/Q1GDp9q2Tw #VenezuelaLibre

In response to criticism from Democrats, Sanders—who is an independent but sought the Democratic nomination in 2016—tweeted that the “The people of Venezuela are enduring a serious humanitarian crisis. The Maduro government must put the needs of its people first, allow humanitarian aid into the country, and refrain from violence against protestors.”

This response also drew fierce outrage, though not from Capitol Hill.

“[If] you buy the Trump, Bolton, Abrams, Rubio line, ‘humanitarian intervention’ and collude in the destruction of Venezuela, you cannot be credible candidate for President of the USA,” tweeted Pink Floyd singer Roger Waters, who supported Sanders’ 2016 campaign. “Or, maybe you can, maybe you’re the perfect stooge for the 1 %.”

Bernie, are you f-ing kidding me! if you buy the Trump, Bolton, Abrams, Rubio line, “humanitarian intervention” and collude in the destruction of Venezuela, you cannot be credible candidate for President of the USA. Or, maybe you can, maybe you’re the perfect stooge for the 1 %.

“[You] know better than to endorse a stunt led by war criminals who have snuck weapons in aid shipments in the past,” added independent journalist Abby Martin. “This stance will not make democrats like you more and will only lose you support from socialists.”

The inherent conundrum Sanders faces over Venezuela is that if he does not come out fully against the current regime, he is seen as sympathetic toward Maduro—which could hurt his ability to secure the Democratic nomination, while providing Republicans plenty of ammunition. But if he condemns Maduro, he risks infuriating his own base who remains staunchly anti-internationalist.

The senator’s foreign policy team has tried to walk the middle road: Avoid condemning Maduro, while remaining open to foreign aid in the region.

“Coming out as Trump has done and sort of putting the US in the lead—just completely recognizing Guaidó as the president—and putting the U.S. four-square behind the opposition, has the potential to create some possible outcomes that the U.S. is not quite prepared for,” Sanders’ foreign policy advisor Matt Duss told Business Insider on Tuesday. “The senator is pushing to let the humanitarian aid into the country, using whatever tools we can to pressure the [Maduro] regime to move toward elections.”

Unfortunately for Sanders, this strategy is not enough for either side. 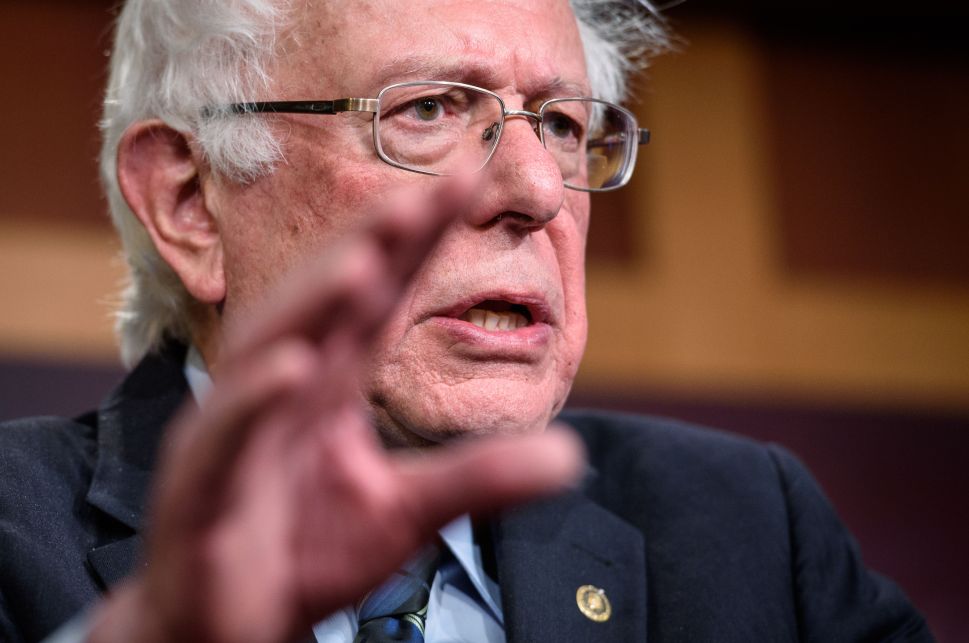