If Donald Trump knows anything, he knows it is better to be praised on Fox & Friends and Hannity than it is to be “loved” or feared. And the president appears to know the best way to win back the good graces of the conservative blatherati machine and outre Twitter racists is to make the deal of his lifetime: get the U.S. government (that is, you) to plunk down $5.7 billion and build a wall separating the United States from our newly rechristened close ally and trading partner, Mexico.

Aside from the usual Trumpian barrage of exaggerated figures, mendacious claims and outright bullshit, the message of his State of the Union speech on Tuesday—actually decent political theater, with white-clad Democrats developing acts of practiced passive aggression into a kind of performance art—can be condensed to a single tweet-length statement: The wall, the “smart, strategic see-through steel barrier,” is absolutely everything. And he has until Feb. 15 to strike a deal and get it done, ere the U.S. will again plunge into the spectacle and suffering of a government shutdown.

“This is a moral issue. The lawless state of our southern border is a threat to the safety, security and financial well-being of all America,” said the president, adopting a tone more familiar to the evangelical Republicans of previous administrations. Announcing the return of American soldiers to dusty stretches of Arizona and New Mexico, invoking the very real fatal drug overdose crisis, and ticking off a ream of ghastly statistics—assaults, sex crimes and murders, all committed by border-jumpers—Trump made a very simple promise. “I will get it built.”

Alright, then. Here we are—again. A president calling for unity while demanding physical separation. The businessman dealmaker calling for nation over party, unwilling to negotiate with his partisan adversaries, upon whom he will heap blame during the next government-worker hostage crisis. And a continued deliberate misinterpretation of how people and goods—including drugs—enter the country. That is, Donald Trump is still lying to you about what the wall would do.

This was true about a year ago, when this outlet ran an item pointing out how drugs flow around the world and how various intoxicants—cocaine, opiates and synthetic opiates like fentanyl, methamphetamine—enter the country. It remains true that overland routes crossing the southern border are not how many drugs enter the country—drugs enter the U.S. by plane and boat, from Colombia and the Caribbean. And so far, Trump has not proposed extending the wall from the Gulf of Mexico to the Florida Keys to where he can see it from his bedroom at Mar-a-Lago.

It was true in January, when testimony from the trial of cartel kingpin Joaquin “El Chapo” Guzman revealed what anyone with a shred of knowledge about the issue already knew: Drugs are trucked into the United States, where there is a demand for them that will never abate, through legal ports of entry along the border. They are not trafficked through remote stretches of the desert. Almost $340 billion worth of goods flowed from Mexico into the United States in 2017. Hidden in the containers were drugs. While not yet ratified, the “new NAFTA,” the U.S.-Mexico-Canada Agreement, will not stop this.

“The idea that people are walking drugs across the border as though they are illegal immigrants who would then be stopped by a wall across the border, that is not the pattern,” said Doris Meissner, the former commissioner of the Immigration and Naturalization Service, the pre-9/11 precursor to ICE, in comments to The New York Times. In other words, one of the core arguments in favor of a wall—that it will physically halt the flow of drugs, as if drug-traffickers were about as resourceful as a Roomba—is utter fantasy.

But what about people? It is true that airports are relatively secure (when the employees staffing them are paid and do not decide to walk off the job or call in sick after nearly five weeks of working for free) and that the classic illegal migration pattern is a hazardous journey through the desert.

At the same time, that’s not what people are doing anymore. (Not even MS-13, Trump’s favorite bogeyman, a problem that is increasingly homegrown and, while not good, a problem that targets a very specific community, not the U.S. at large.) In some areas in California, most undocumented immigrants are coming not from the south, but from the far East. In San Francisco, a supposedly out of control sanctuary city, the number of undocumented people from China and the Philippines is roughly comparable to Mexican nationals. This is not news.

“One thing is for sure: The era of mass migration from Mexico is over,” said Karthick Ramakrishnan, a professor at UC Riverside, in an interview with The Sacramento Bee. This interview dates from 2015. That same year, ICE officials complained of being unable to offload 39,000 people who had been marked for deportation. They were stuck in legal limbo—not quite as viscerally damaging as unattended kids behind chain-link fences, but still bad—because their country of origin wasn’t interested in receiving them. That country was China.

In other words, if the president wanted his xenophobia and his nativism to be coherent, he would cast the net wider. But that won’t please the base. The great irony is that nearly everyone agrees the country is in need of a vast infrastructure project like what Trump vaguely promised while on the campaign trail. Workers in Trump country would greatly benefit from new roads, job training, new airports—anything, really, as long as there is money to fund it. Yet here we are again, having a frivolous and bad faith talk about a wall, worthless in every regard other than as a good-for-TV visual. Which means for Trump, the wall—an unaffordable, useless McGuffin—is exactly what he’s willing to stake his reputation and possibly the rest of his presidency upon. 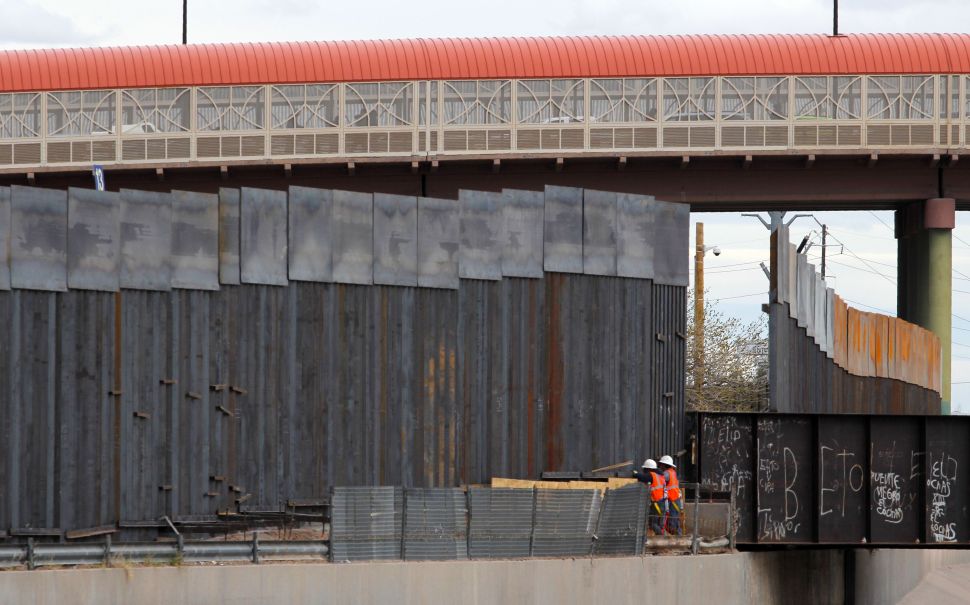