On January 2, residents of New Orleans’ Lower Ninth Ward who were living in homes built by Brad Pitt’s Make It Right Foundation received notices from the city saying that they should have their gas lines inspected.

These warnings were distributed after it was discovered that one of the homes had a covered-up natural gas regulator, which is supposed to be kept in a ventilated area so it can be properly maintained, The New Orleans Advocate reported. A covered gas regulator creates an elevated risk of gas leaks, which Make It Right homeowner Ann Maier says she has already experienced.

Although the homes built by the Make It Right Foundation are less than 15 years old, the threat of gas leaks is only the latest in a string of problems the houses’ residents claim they’ve experienced due to shoddy construction work and poor design caused by the organization’s negligence.

The Make It Right Foundation was formed in 2007 after Hurricane Katrina with admirable goals in mind. “I saw this land, it was available, and I thought we could make a difference,” Pitt told NOLA.com in 2010. “Starting from scratch has its benefits. Too often we give disaster victims cheap building products, slipshod materials, and then put on top of them the burden of energy bills and medical bills. You know it’s the badly built levees that destroyed these people’s lives. We needed, as a country, to do something right for them. A new paradigm was needed.”

But in September 2018, two residents of the Lower Ninth Ward filed a class-action lawsuit against the Make It Right Foundation that has since moved to federal court. They are charging that the organization is guilty of fraud, breach of contract and unfair trade practices vis-à-vis the construction of the homes, many of which are allegedly falling apart.

The “multitude of damages” include rotting wood porches and foundational beams, leaks, electrical deficiencies and plumbing issues, all of which occupants say have left the houses increasingly unlivable. To make matters worse, many residents are currently making payments on decades-long mortgages on properties they worry could ultimately turn out to be worthless.

And money struggles haven’t just plagued the residents of the Lower Ninth Ward. A confidential board report obtained by Bloomberg Businessweek for a story it published late last week suggests that by 2014, Make It Right had been drained of $1.8 million for “unexpected repair costs,” and that “37 decks and porches had been ‘identified to have structural issues involving product failure.'”

“Structural issues” were obvious to the residents, but the foundation seemed to want to contain the spread of this intel. Maier, who lives in a Make It Right house she bought in 2016, recently told NOLA.com that she signed a nondisclosure agreement with the foundation that stipulated that she couldn’t speak publicly about the state of her home. This demand for silence, she said, also intimidated many in her neighborhood.

“My neighbors say ‘We’ve been told that if we say anything, they won’t fix our houses,'” Maier said. “Well, I’m sitting here watching them not fix their houses anyway.” Maier also said that she isn’t interested in any potential settlement in the lawsuit filed by Lower Ninth Ward residents—she just wants her place fixed.

But the story gets more complex. Shortly after the class-action lawsuit was filed last fall, the Make It Right Foundation filed its own lawsuit against John C. Williams, the organization’s executive architect, for designing and overseeing the construction of these homes.

Then, at the end of November, Pitt filed court documents in Louisiana asking for the charges against him to be thrown out. “Mr. Pitt cannot simply be lumped together with other defendants and held liable for alleged conduct in which he is not even alleged to have participated,” the request stated.

The ruling on the extent of Pitt’s responsibility for the allegedly unlivable homes could affect whether the lawsuit will proceed in its current form.

“From the plaintiff’s perspective, they’re asserting that they’ve been harmed because of purchasing a defective house,” Kelly Hyman, an attorney at Franklin D. Azar & Associates who specializes in consumer class-action lawsuits, told Observer. “However, in regards to Brad Pitt, he asserts that he is a member of the foundation on the board of directors. The plaintiffs are suing not only the foundation, they are suing Brad Pitt personally. If the judge grants Pitt’s motion to dismiss, Pitt will no longer be personally named a party to the lawsuit.”

However, if Pitt successfully argues that he shouldn’t be involved in the lawsuit as an individual, the plaintiffs will have a right to appeal that decision, as well as to amend their original complaint to assert additional allegations.

Louisiana law could further complicate matters. The Louisiana Unfair Trade Practices Act, which the Ninth Ward plaintiffs refer to in their lawsuit as legislation that was violated by the Make It Right Foundation, explicitly prohibits class-action claims. In other words, a sole person would be able to invoke the act in their claim, but a group is prevented from doing so.

As the suit progresses, residents of the Lower Ninth Ward are grappling with the gap between what they were promised and what they’re currently experiencing. Not all of them blame Pitt for the results. LilJose Marie Tompkins, 56, told The New Orleans Advocate that Pitt’s commitment to the neighborhood in the aftermath of the storm “kind of gave us a foothold.”

“I refuse to blame Brad Pitt,” Tompkins said. “He’s not a builder. He’s an actor. All he knew was that he wanted to do good. This man tried to do good.”

Pitt may have had the best intentions, but as history has proven, it’s all in the execution.

As Katrina approached, thousands of New Orleans residents took evacuation advice and fled, but those who remained couldn’t have predicted the consequences. They were placing their faith in the seemingly impregnable, federally mandated levees that surrounded the city to shield citizens from deadly floodwaters. What happened instead—the failure of the aforementioned barriers that led to the flooding of 80 percent of New Orleans and hundreds of preventable deaths—was largely due to a civil engineering flaw, which itself was the result of poor scientific due process.

An anonymous former Make It Right employee told Bloomberg Businessweek that, at least a few years ago, the problems with the foundation weren’t yet unsalvageable; something could have been done then to right the ship. But that would have required the organization to admit some sort of culpability. “They just didn’t want to say: ‘Sorry, we screwed some things up,'” the source said.

Whether or not Pitt should take the fall for the alleged mistakes of the Make It Right foundation is a determination to be made in court, but regardless, the inhabitants of the Lower Ninth Ward deserve more than what they’re getting. 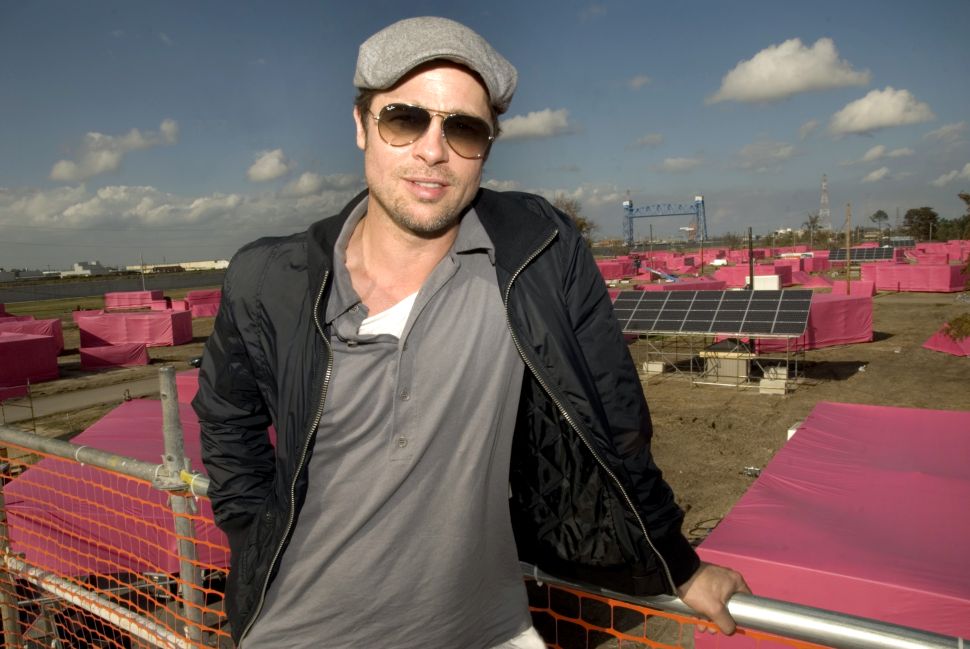