A vicious revenge thriller set in the frozen wastes of the Rocky Mountains with Liam Neeson again playing the same brand of lock-jawed vigilante he’s been polishing off in a rash of recent film appearances, Cold Pursuit, the English-language remake of the Norwegian film In Order of Disappearance, earns its obvious references to the three Taken films, like it or not. But as the corpses pile up on every side of the law, it reminds me more of those nasty, sometimes laughable Charles Bronson genre vehicles from the 1980s, buried under 50 feet of snow. Call it Death Wish with icicles.

The director is, once again, Norway’s Hans Petter Moland, who also made In Order of Disappearance, but this time he moves the setting to a remote corner of civilization in Colorado (played by British Columbia) where Neeson works as a snowplow driver named Nels Coxman. His job is to fight off frostbite while he keeps the roads clear and the walks shoveled. His son does the same thing for the runways at the local airport, and his wife (a wasted Laura Dern) keeps the coffee hot.

One day they learn that the boy has died of a heroin overdose. Grief is overpowered only by the knowledge that their son was a clean-cut guy who never used drugs of any kind. After launching his own investigation and killing several deserving scumbags in the process, Nels discovers his dead son was targeted by an uber-criminal named Viking (Tom Bateman), a handsome Denver billionaire playboy who uses the local ski resort as headquarters for a ring of homicidal maniacs, smugglers and assorted drug dealers preying on skiers and other tourists. Let the movie massacre begin.

One by one, the thugs die violent deaths of unspeakable torture, and as the bodies multiply, each one is listed on the screen by colorful nicknames such as Santa, Speedo, Limbo, Smoke, Bone, Eskimo and Avalanche. Viking fights back, of course, killing the son of his rival gang boss, a Native American chief named White Bull (Tom Jackson), who joins the killing spree with his own tribal revenge. For a while, Liam Neeson disappears from the action after kidnapping Viking’s son, hoping it will draw his own son’s killer out in the open.

Meanwhile, White Bull is determined to kidnap the kid himself to get even with Viking for killing his son. The screenplay is all over the place, pausing briefly to show the sensitive side of Nels’ Marlboro Man persona as he plays classical music and reads bedtime stories to his sensitive charge. Enter a female cop (Emmy Rossum) who wants to rid the town of all of them put together. Before you can say “Quentin Tarantino in the old West,” everyone is shooting it out with everyone else and there are so many nicknames of tertiary characters on the scoreboard you can’t remember them all, so I advise you to give up trying and just sit back and enjoy the mayhem.

No spoilers, but so many die, for so many different reasons and in so many different ways that you might find yourself laughing aloud at the overwhelming silliness of it all. It’s complicated and contrived, with a plot twist every few minutes, but to be honest, I found it wild enough to predict you’ll be riveted by the details leading up to the outcome. Cold Pursuit will not go down in history as one of Liam Neeson’s most memorable efforts, but it’s fun while it lasts, and he seems to have more fun than anyone else. 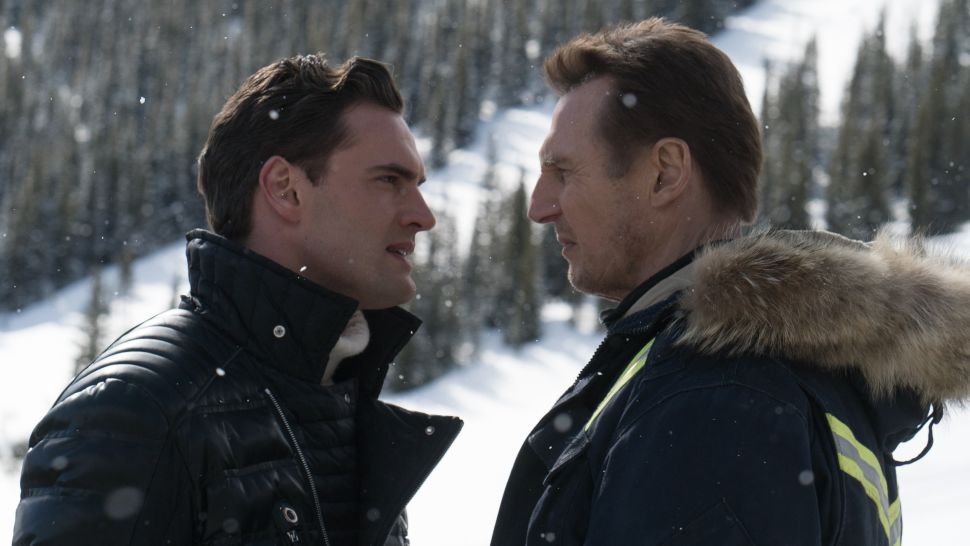