After a presidency that has used the world’s loudest bully pulpit to spread the message that “my life would be better if it weren’t for the immigrants, the cheats and the Democrats who spend money and regulate big business,” Cory Booker’s message of love and brotherhood just might resonate.

Whether Booker can unite the country behind his message will be tested in the months ahead. Nevertheless, unlike former Governor Chris Christie’s bid for the presidency four years ago, Booker’s candidacy is more likely to unite New Jersey and create pride rather than to divide the state and create another source of embarrassment.

While most New Jerseyans did not view Christie as “presidential,” Booker has been a presence on the national stage for several years and has defined himself by national issues. His command of social media and his extraordinary personal charisma have already given him a national audience. Long lines of people eagerly wait with their cell phones to take a picture with him.

Booker Is the Real Deal

But those who know Cory Booker will tell you that he is not about Twitter, selfies and sound bites. Booker earned his reputation as a rising star in the Democratic party by working his way up through the ranks and developing public policy through on-the-job experience. He is the real deal. He doesn’t just talk the talk; he walks the walk.

Throughout his career, Booker has spoken for those who feel their voice is too weak to be heard. As New Jersey’s first African-American senator, Booker still lives in Newark’s Central Ward when he’s not in Washington, D.C. In a time when many senators are characterized as “out-of-touch,” Booker is one of the few who returns home to a low-income inner-city community.

As mayor of Newark, Booker was able to connect with a diverse community that included African-Americans, Latinos and struggling working families. His years spent in Newark’s City Hall informed his message and may have been the practice run for a theme that could electrify and unite a nation.

Booker’s ability to speak directly to the Latino community may play a key role in the 2020 election. One of his first interviews after announcing his presidential bid was with Univision. He conducted the interview largely in Spanish, which he learned 20 years ago when he was first starting out in Newark.

“I live in Newark, New Jersey, and the support of the Latino community in the past changed my life and helped me win the mayoral race, because I had Latino support,” Booker said in the interview. “So my work in my political life has always been in conjunction with the Latino community.”

He added: “It’s obvious my Spanish isn’t perfect. But I want to talk directly with people about my ideas and platform.”

No matter who is in the audience, Booker is by far the best public speaker of any Democratic candidate. His energy and charisma will light up the campaign trail from New Hampshire to Iowa to South Carolina. If you need a reminder, check out his speech at the 2016 Democratic National Convention. At 49, he also has the stamina to carry his campaign all over the country.

The best thing that Booker has going for him is that he is the antithesis of Donald Trump. Aside from their divergent views on everything from health care and immigration to the environment, Booker’s tone is what makes him stand out. Rather than tear down his opponents and critics, Booker emphasizes the importance of positivity. “You can be a strong, tough street fighter and still be a person of grace and love and kindness and empathy and vulnerability,” he said in a recent interview.

Booker also continually preaches about the importance of love—not just bipartisanship or tolerance of divergent viewpoints—but real love for our fellow citizens. While love was a notion espoused by leaders like Martin Luther King, it’s not something you hear about in politics anymore. “We are at our best when we give the ultimate sacrifice of putting other people, putting the country, putting our communities ahead of ourselves. If that’s not love, I don’t know what is,” he stated in a recent interview with The Atlantic.

Booker’s record reflects his commitment to putting his constituents first. After the contentious confirmation hearing for Justice Brett Kavanaugh, Booker went back to work. In December, he helped pass a landmark, bipartisan bill to reform the criminal justice system, working with Republican Sen. Lindsey Graham to ensure his Mercy Act, which ends the solitary confinement of juveniles under federal supervision, remained in the final legislation.

As he hits the campaign trail, Booker’s ability to rise above the fray and bring people together will be critical to his success. He’s already off to a good start. After Booker’s official announcement, his friend and colleague Sen. Kirsten Gillibrand (who has also announced) took to Twitter to congratulate him. “Congratulations and welcome to the race to one of my closest friends, @corybooker! I’ll be cheering you on—just, you know, not TOO hard.”

Former Gov. Christie has stated that he believes Booker has a good chance of winning the Democratic nomination and even the White House. “Cory’s bright, he’s articulate, and he’s talented,” Christie stated. “I hope he is who he is,” Christie added. “Authenticity is more important than ever.” 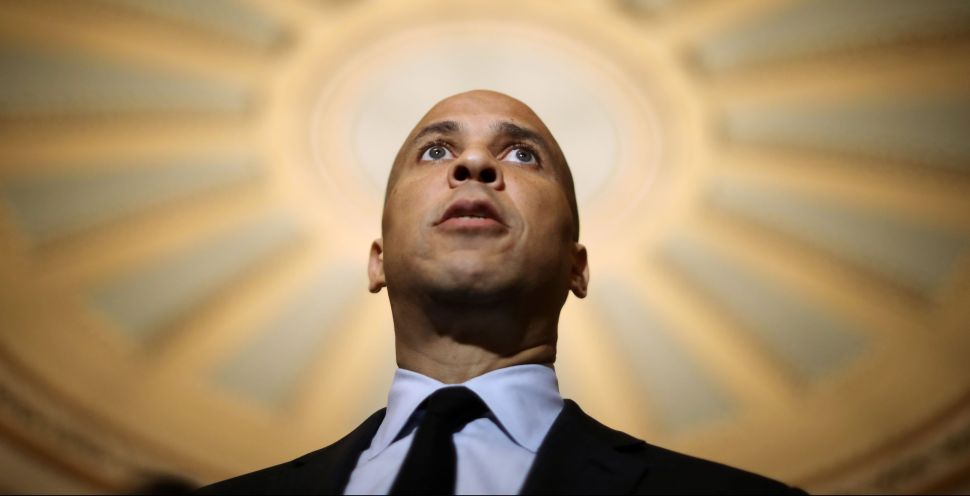