The hoopla surrounding the Oscars is almost entirely focused on films and the awards themselves, which is understandable. Everyone who cares about American movies is deeply invested, in some way or another, in the accolades their favorite pictures did or didn’t win. This is well-trodden territory with an extensive legacy, but among the innumerable supporting players who are deservedly honored at the Academy Awards, the culinary experts who supply the sustenance and libations to do with the ceremony are perhaps most deserving of a trophy.

Celebrity chef Wolfgang Puck, for example, has catered the Governors Ball, which is the Academy of Motion Picture Arts and Sciences’ official après-Oscars party, for an incredible 25 consecutive years. Francis Ford Coppola, the celebrated director of Hollywood New Wave classics including The Godfather, Apocalypse Now and The Outsiders, is the purveyor of Francis Ford Coppola Winery, the seeds of which were generated more than 40 years ago when Coppola purchased a new home smack dab in the middle of wine country.

The 2019 Oscars ceremony marks the third year where Francis Ford Coppola Winery stands as the official wine sponsor of the Academy Awards, and winemaker Sandy Walheim made sure that two impeccable vintages were bottled for the occasion: The Final Cut-91st Edition Rutherford 2016 Cabernet Sauvignon and the Final Cut-91st Edition Russian River Valley 2017 Chardonnay, both of which are decorated with one-of-a-kind, animated zoetrope labels. Additionally, the wine will only be served at the 2019 Oscars and the Governors Ball, the Academy’s official party. Unlike in recent years, it will not be made available to the public.

“The 2016 vintage wine…that fruit comes from the ranch where Francis and Eleanor Coppola live in Napa Valley,” Walheim said. “We work closely with really nice people from the Academy so that they can be part of the process for the selection of the wine.”

The labels depict a rambunctious devil figure leaping from oversized toy ball to oversized toy ball in an homage to early cinema, and in a phone interview with Observer, Walheim explained that these special wines would not be made available to the public due to both the challenge of brewing small quantities and the exclusivity of the innovative label design, which was also Coppola’s brainchild.

“The two exclusive wines represent about three barrel’s worth of wine apiece, and that’s not very much…and the label was five years in the making. It has the appearance of movement; it does move,” Walheim said. “We had to be sure that there was enough time to have the bottles hand-labeled, one by one, and then shipped on down there.”

“The concept of the label came from Francis himself,” she continued. “Sometimes he’ll mock up something with paper and crafts, but our production packaging team spent five years, with many tries, to get it to look right. And [they look] spectacular. When we showed it to people, their eyes were wide open and their mouths dropped.”

It goes without saying that the wines themselves are Academy-caliber delicious. If you need proof, look no further than superstar Jennifer Lawrence, who spent the 2018 Oscars with a glass of Coppola white wine lodged firmly in her grasp. 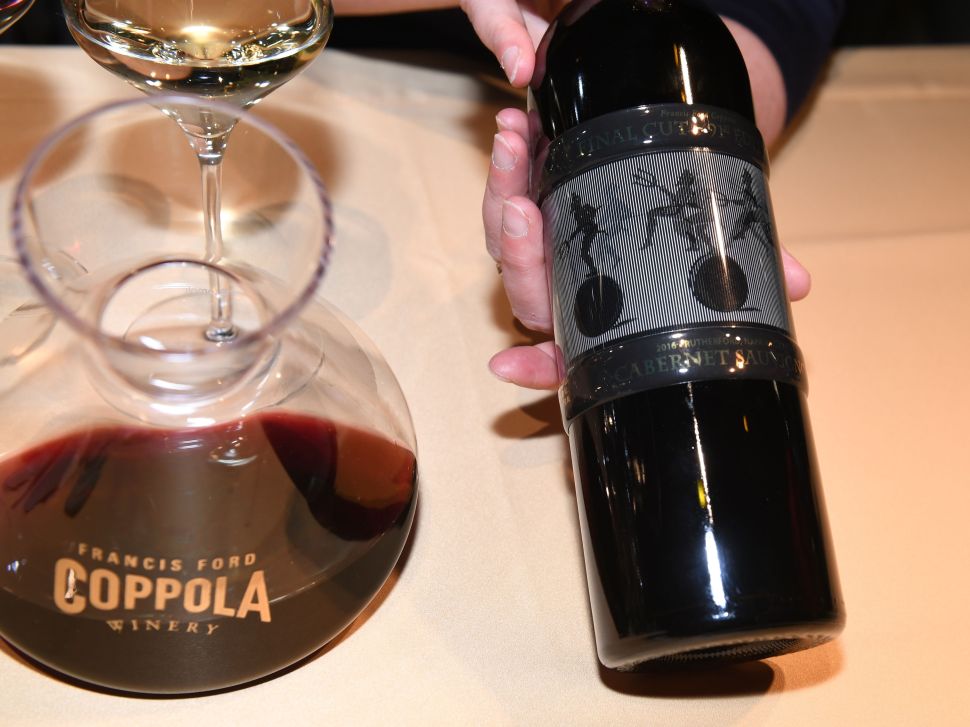