In the summer of 2017, HBO announced that Game of Thrones creators David Benioff and D.B. Weiss would develop Confederate, a series about an alternate post–Civil War reality in which “the Southern states have successfully seceded from the Union, giving rise to a nation in which slavery remains legal and has evolved into a modern institution.” Then, in February 2018, Lucasfilm announced that the duo had been hired to write and produce a new batch of Star Wars films. Both are mammoth undertakings that can’t possibly be completed side by side.

The former was met with criticism and controversy, with detractors skeptical of a white creative team tackling a racially charged slave drama. HBO even admitted regret over how the show was announced as #NoConfederate became Twitter’s No. 1 trending topic in the U.S. soon after. Meanwhile, the latter seemed banished to developmental purgatory after the poor performance of Solo: A Star Wars Story led Lucasfilm to shelve several planned spin-offs.

Now, it looks like both projects may be moving forward, though Confederate is hardly a guarantee.

“Dan and David are finishing up the final season [of Game of Thrones] and then they are going to go into the Star Wars universe,” HBO president of programming Casey Bloys recently told TVLine. “When they come out of that, I assume they will come back to us.”

Bloys has previously said that the pair’s involvement with Star Wars would not disrupt the development of Confederate, but the show’s timetable is a mystery given the significant commitment the creators have made to Lucasfilm, though Bloys maintains it has nothing to do with the controversy. “The delay has to do with [the fact] that they were offered three movies,” he said.

As of July, the Confederate creative team—which also includes Nichelle Tramble Spellman (The Good Wife) and Malcolm Spellman (Empire)—had not written any scripts.

“It’s hard to say to someone, ‘You can’t go do Star Wars,‘” Bloys said. “They love it. It’s a childhood dream. They’ll go do that, remember why they love television and come back.”

Wishful thinking or simple realism? As HBO beefs up production to better compete with Netflix, keeping the creators of the network’s biggest-ever in-house success is of the utmost importance for brand optics.

The new Star Wars movies will stand apart from both the main episodic saga and The Last Jedi director Rian Johnson’s planned spin-off trilogy. While the swords-and-sandals nature of Thrones makes Benioff and Weiss a great fit to adapt the beloved Knights of the Old Republic story lines, we have no official news on the direction of their trilogy. 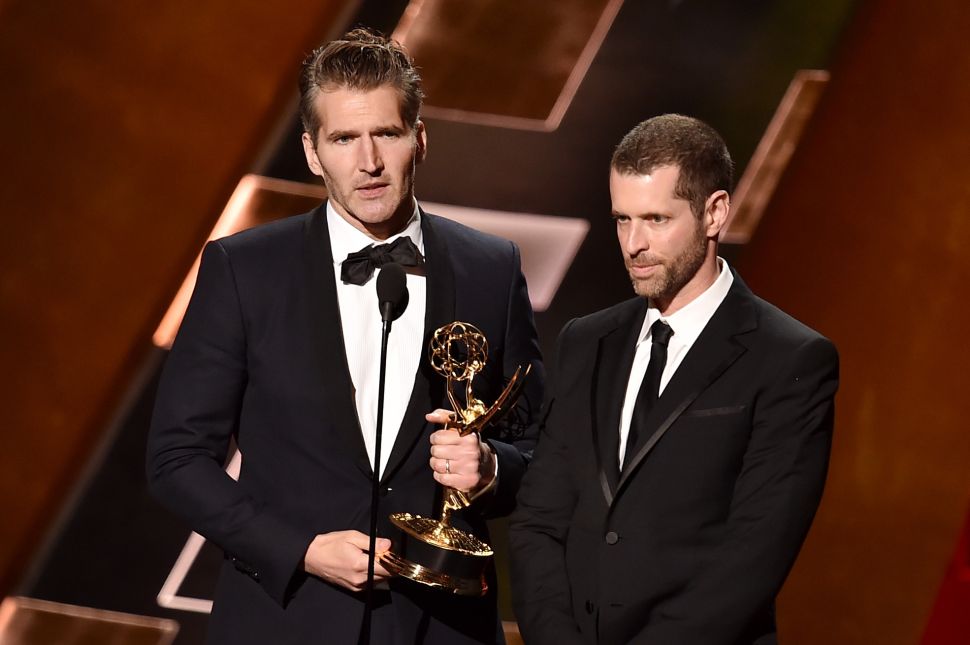