Artist Laurie Simmons has been playing with dolls for more than four decades. While it was back in the 1970s that she first began photographing miniature people and houses to blur the lines between fiction and reality, Simmons’ work made in recent years continues to examine that which dolls so easily stand for: archetypal female gender roles. Now, her timely exploration is the subject of a new retrospective, “Big Camera/Little Camera,” opening at The Museum of Contemporary Art Chicago on February 23.

Using props, makeup and staged scenes, Simmons creates photos that probe societal myths—particularly ones presented as truths in image culture at large. The namesake work for the exhibition, Big Camera, Little Camera, 1976, is a photograph of two different sized cameras, inspiring the viewer to question what is real and what is not. In the image, an authentic camera is positioned alongside a miniature one, highlighting exactly what Simmons intends to do with her work—manipulate scale and draw attention to the ways we receive information via visual means. In a time when people are spending more of their lives on social media, a hyper-realistic environment where we readily consume stolen memes and fake news, Simmons’ work remains deeply relevant today.

Growing up in Queens, New York, in the 1950s, Simmons watched as her father, a Jewish dentist, began experimenting with a camera in his free time. Eventually, Simmons herself went onto study art at Tyler School of Art in Philadelphia, Pennsylvania. Following her studies, she spent time in upstate New York and Europe, ultimately moving to the Bowery section of Manhattan in the mid 1970s, where a community of artists were trying to make ends meet. Now recognized as a member of The Pictures Generation, which includes contemporaries Cindy Sherman and Barbara Kruger, it was during this time that the artist first began experimenting with the ways a camera could be used to construct reality by capturing fictional scenes.

Back then, Simmons was briefly hired to do photography for a dollhouse miniature company. Finding inspiration in her day job while also drawing on a hoard of old toys she found upstate, the artist began arranging dolls and other tiny playthings, which dated back to her childhood days, and then shooting them in intentional, exaggerated ways. This experimentation included a series of photographs, “Early Black and White” (from 1976 to 1978), in which dolls are isolated and captured in minute, austere situations. This formative work commented on tropes Simmons grew up around—such as the 1950s housewife and female domesticity—questioning the ways girls like her had received messages about their role in society from a very young age.

In her practice, Simmons has also made commentary on our complicated relationship with bodies. In “Walking and Lying Objects” (from 1987 to 1991), the artist used a collection of legs, including those from human scale to miniature models from Japan, arranged below recognizable domestic objects such as cakes and musical instruments. The pieces become personified, emphasizing the ways in which the media circumscribes and fetishizes the human figure, particularly that of women. A later series, “The Love Doll” (from 2009 to 2011), revisits Japanese dolls, but uses high-end, life-size ones. These cultural objects reveal some uncomfortable truths about how society has evolved, and Simmons’ work serves as a microscope, underlining the problematic messages they have perpetuated.

A recent body of work, “How We See” (begun in 2014), stresses the ways in which social media allows us to put our most desirable, albeit falsified, selves forward. Unlike her earlier work where fake human elements trick the eye, this series features real sitters who appear mostly normal, but with closed eyelids that have been painted with faux eyes by makeup artists. Consequently, the viewer is forced to confront our new reality in which we take in curated versions of people who can’t see us back. (The gift shop at MCA Chicago will sell eye masks and glasses cases that mimic this effect.)

Throughout the exhibition, photographs are seen alongside a selection of strange props used to create her imaginative settings, offering an illuminating view into her process in which color-coding has often been used to orchestrate different vignettes. Additionally, the exhibition also features a small selection of Simmons’ film projects. For example, in The Music of Regret, actor Meryl Streep engages with old puppets, amidst a sea of dancers who are dressed as exaggerated, lifeless objects.

Though we’ve made real strides in the battle for gender equality in the past 70 years, it is worth acknowledging the ways Simmons’ work, and that of other pioneering female artists, paved the way for current social movements. It is largely thanks to the cultural legacy of artists like her that more nuanced conversations are now able to take place. 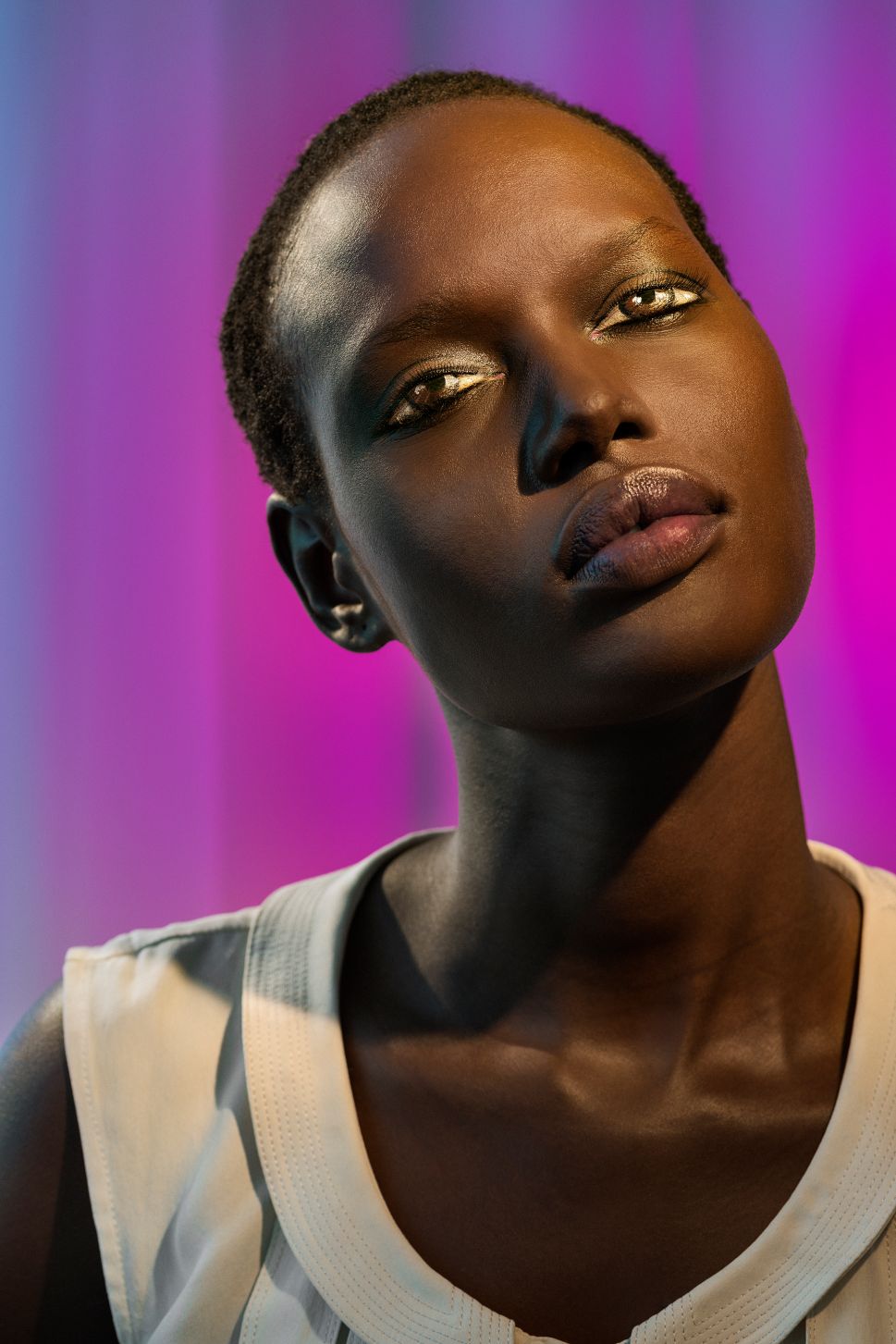